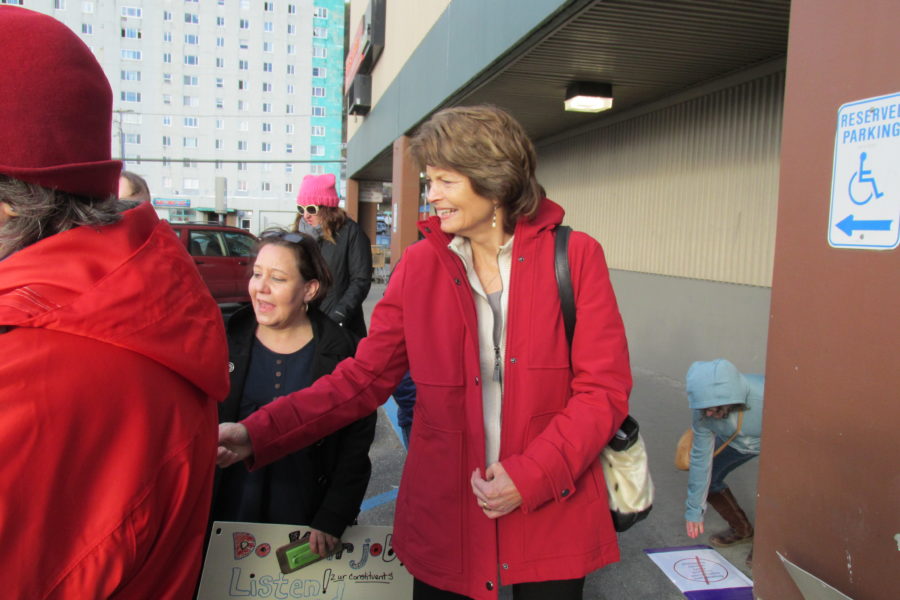 Senator Murkowski shakes hands with demonstrators outside the Ketchikan Plaza.

Senator Lisa Murkowski was in the First City Monday to speak at the Republican Lincoln Day dinner. Earlier in the day, she answered questions from demonstrators, and was the guest speaker at a special AARP meeting. She also met with the press.

During the news conference, Murkowski gave her thoughts on the Trump administration and some of the president’s appointees.

Asked if Donald Trump’s rise represents a shift in the Republican Party, and what impacts there have been to the party, Murkowski says it’s hard to say right now.

“I think most people would tell you that Donald Trump is not really a party person. He did not rise through the ranks of the Republican Party. He had not held elected office. He was really the non-conventional candidate, if you will. So from the party’s perspective right now, I think there’s still a lot of sorting through.”

“I can tell you as one who comes from a resource rich and resource production state, as a state that feels like the federal government has too much involvement in our day-to-day lives anyway, those principles that he has articulated about – Let the states work this. Get the federal government off of everybody’s back. Allow us to produce our resources. Allow us the opportunity to create these jobs. Those are pretty good, strong, fundamental Republican principles that I hope will bring us together.”

President Trump has said he supports leaving marijuana policy up to the states. Attorney General Jeff Sessions opposes legalization. Murkowski says she spoke with Sessions about the issue when he was nominated. She says she told him she was concerned with conflicts between state and federal law, especially with regards to banking.

Senator Murkowski listens to the concerns of demonstrators outside the Plaza.

She says some people have been critical of Sessions, but she has worked with him for 14 years, and though they disagree on many issues from a policy perspective, they have always been able to have positive discussions.

Regarding resource extraction, Murkowski says she believes Trump will be helpful to Alaska and other states with resource opportunities.

“I think we saw this very early on when he moved to help facilitate the Keystone XL Pipeline as well as the North Dakota Access Pipeline.”

She says Trump made it clear in his campaign that jobs and economic opportunities, as well as national security, are enhanced when resources are produced domestically.

With regards to immigration, Murkowski says she believes we should start with the premise that “we are a nation of laws, and all within the borders should respect those laws.”

“I put these ‘dreamer’ category, these young people who came in as children, came in as minors, in a completely different category from those who, we would say, ‘Wait. If you are here in this country, and you’ve committed crimes or violence here, why should we continue to be an open door in terms of our immigration policies?’” 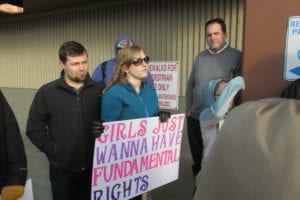 “People have been critical of President Trump with his approach in the first few weeks in office, but I will give him all due credit with the selection of Judge Gorsuch, and how he presented him to the American public.”

She says she believes Gorsuch will be confirmed.

Earlier in the afternoon, Murkowski was met outside the Ketchikan Plaza mall by a group of demonstrators from the Ketchikan Action Network.  Mary Stephenson is the organizer of the group. She says they expressed their concerns about senior issues, immigration, President Trump’s travel to New York and Florida, and extra Secret Service needed because of this travel.

“And she agreed. She says in one month, he’s tallied an insurmountable amount of money that they’re looking into.”

Stephenson says she feels the discussion was productive.

“She was good with her quick responses. She apologized that she couldn’t do a town hall meeting. This time around it just wasn’t in her schedule. She is going to be out and about in her April recess to have more town hall meetings.”

There is no confirmation that Murkowski will hold a town hall meeting in Ketchikan in April, but Stephenson is hopeful.

Tomorrow we will have a story on the issues discussed at the AARP meeting, including Medicaid, the Affordable Care Act, and Social Security.