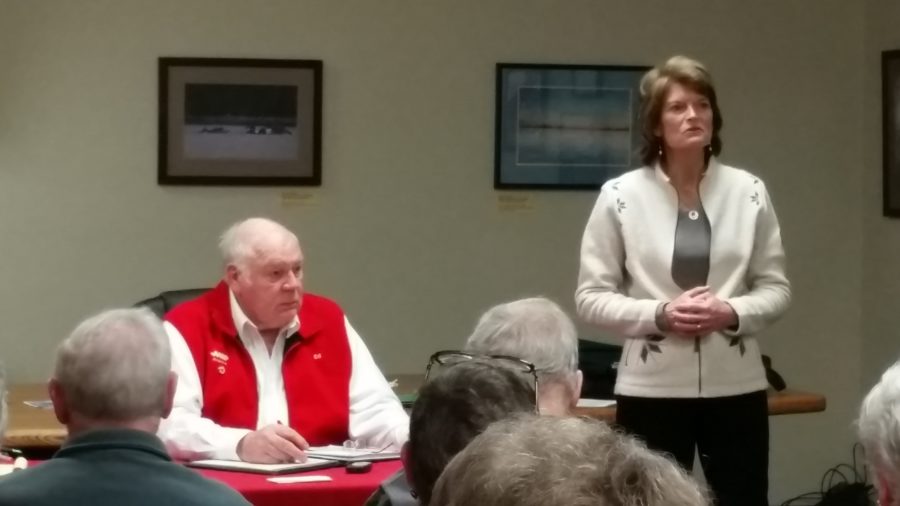 Senator Lisa Murkowski was in Ketchikan Monday to speak at the Republican Lincoln Day dinner. She also was the guest speaker at an AARP meeting earlier in the day, addressing issues of concern to senior citizens.

The room was filled to capacity as more than 50 people, mostly seniors, attended the meeting. Murkowski addressed many issues including Medicaid and Medicare, the Affordable Care Act, and the high cost of prescription drugs.

Murkowski says President Donald Trump has indicated he does not want to touch Medicare or Social Security.

“That’s good to know, because I don’t believe we should be touching Social Security. We need to make sure that Social Security that is here for you today is going to be there for your grandkids. So, how we address that going forward, long term, is important to us today.”

She says there are others who have advocated changes to Medicare, including new Secretary of Health and Human Services Tom Price, and Speaker of the House Paul Ryan. 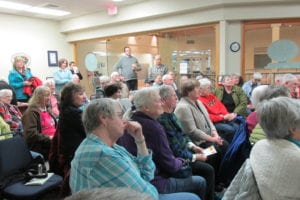 A capacity crowed at the AARP meeting.

Murkowski says in the Senate Committee on Health, Legislation, Labor and Pension, of which she is a member, there are no plans to change Medicare, but there are areas in the Affordable Care Act that need reform.

“Whether it is ensuring we’re stabilizing the individual market. Whether it’s figuring out how we’re going to move forward with Medicaid. But, we’re not touching Medicare. That’s what’s being said in the Senate.”

She says she’s unsure what the House is discussing, but until common ground is found, there won’t be changes to Medicare.

Murkowski says while there is need for reforms, the Affordable Care Act has had some benefits.

“Young people under (age) 26 are being covered. Those with preexisting conditions aren’t being denied coverage. Preventive care is being covered. Mental health issues, which are significant, not only in this state but all over. There has been greater access. There have been some very real benefits that have come to us through the ACA.”

She says another positive benefit for this state has been Medicaid expansion, which has allowed more than 27,000 Alaskans to receive coverage. Murkowski says there is much disagreement on Medicaid expansion, and it will be a “knock-down, drag out fight” in Congress because there are some states that have expanded and some that have not.

Murkowski says one area where things have collapsed in the ACA is in the individual market. Alaska has only one option.

“…and that’s Premera (Blue Cross). Everyone else has folded their tent. There’s no competition. We’re seeing our premiums go up and up and up. Even those that have had coverage for the first time, and are receiving subsidies, are looking at what they’re paying for these high deductibles.”

She says if a person is making $30,000 a year, and their deductible is $3,000 to $4,000, they are not likely to seek some preventative medical care, and will end up in the emergency room. Murkowski says the Senate health committee is focused on stabilizing the individual market.

Murkowski feels if the ACA is repealed, with nothing to replace it, it would leave uncertainty for individuals and insurance markets. She supports making changes through administrative actions until a new plan is developed.

During a question and answer session, Murkowski was asked about the high cost of prescription drugs. Jackie Jones-Bailey is the financial care coordinator at Peace Health Ketchikan Medical Center. 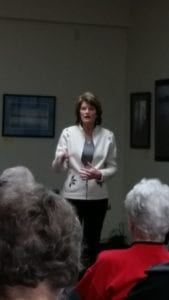 “The self-administered drugs for Medicare Part B is beyond anything that people here can pay and afford. Is there anything we can do to speak out and get more attention? Because it’s more than the EpiPen. Just common medications have gone crazy.”

Murkowski says that when there is a direct example, an issue will get attention. She says when the EpiPen cost issue was made public, she, along with many others in Congress, were contacted by concerned relatives and constituents.

“It was something where all of a sudden, in the Congress, everybody was jumping on things. I called for an investigation immediately. Next thing you know, you have the EpiPen, calmed down.”

Murkowski says that is just one of many drugs with high costs. She advised people to contact their representatives with specific, concrete examples, and share their stories. Murkowski believes the new administration will made some headway in the high cost of prescription drugs.