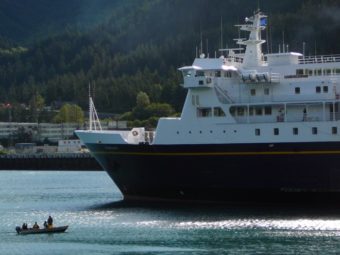 Fishermen in a skiff pass the ferry Kennicott in Whittier’s harbor in 2011. The ship will return from repairs two weeks late. (Photo by Ed Schoenfeld/CoastAlaska News)

It stopped sailing in early January for its annual overhaul at the Ketchikan Shipyard.

“And we learned just a few days ago from … the engine manufacturer that because of the unexpected level of maintenance that needed to be done on those parts that they had in Seattle, that we were going to require an extra two weeks,” he said.

The Kennicott carries up to about 500 passengers and 65 to 75 vehicles. It’s almost 20 years old, which makes it one of the younger ships in the marine highway fleet.

It sails a long route, from Bellingham, Washington, through Southeast and the Gulf of Alaska, to Kachemak Bay and on to Kodiak.

The Southwest ferry Tustumena will enter the shipyard for its overhaul March 13.

Falvey said that leaves five ports with no service from March 23 to March 27.

The Kennicott went into its overhaul later than scheduled so it could cover for other ferries needing repair.