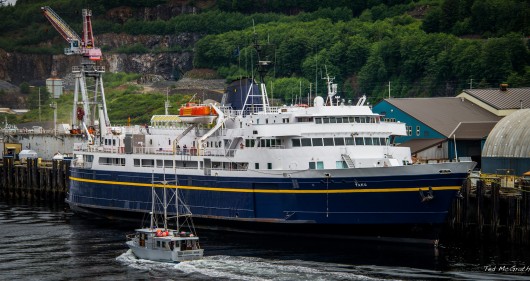 The state ferry Taku is for sale. The minimum price for the 54-year-old ship is $1.5 million.

Alaska Marine Highway officials announced the invitation to bid Saturday. The deadline for proposals is May 9.

The Taku is tied up at Ketchikan’s Ward Cove. It was taken out of service in June of 2015 due to budget cuts and other factors.

“With the state’s budget crisis and budget challenges that we have and the marine highway have, it’s not possible to run an 11-ship fleet. We just don’t have the maintenance funding and the operational funds to do that,” he said.

The Taku was built for long sailings, with room for about 350 passengers and 50 vehicles. It has 40 staterooms, a cafeteria, observation lounges and a covered solarium.

Marine highway spokeswoman Meadow Bailey said it’s not a derelict vessel. She said it can still sail, but needs some certifications and maybe some work.

“It’s being sold as-is, where-is. So whoever wins that bid would have the responsibility of transporting the vessel, paying for the cost to transporting it, or if they decide that they want to store it still, to assume that cost,” she said.

The marine highway had to win federal approval before moving ahead with the sale, because federal funds were used for maintenance. It also had to offer the ship to other state and local government agencies. There were no takers.

Another state vessel, the fast ferry Chenega, is also in long-term storage.

But Neussl said it’s still part of the fleet.

“The decision has not been made that that vessel is excess to the state’s needs, like we have made for the Taku. So that vessel is just in kind of inactive status right now, pending the outcome of the budgetary process and what it looks like we can afford to operate,” he said.

He said about a dozen people or organizations expressed interest in buying the Taku before it went out to bid.