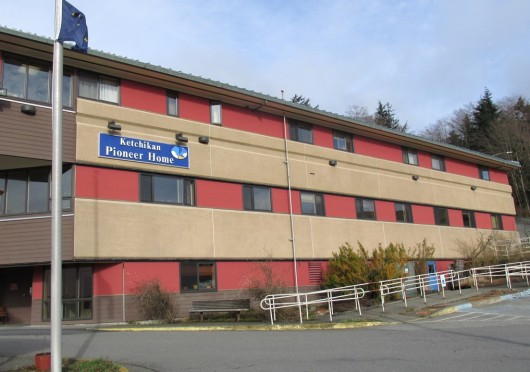 The Ketchikan Pioneer Home is one of six in Alaska caring for older residents. (Photo by KRBD)

At the end of Thursday’s Ketchikan City Council meeting, a Council member warned of likely repercussions from a state budget cut to Alaska’s Pioneers Homes.

Council Member Bob Sivertsen is a member of the state Pioneers Homes Advisory Board and works with the Ketchikan Pioneers Home Foundation. He said the Senate Finance Committee cut about $6.5 million of state funding for those long-term-care residential homes for seniors.

“They’re cutting them from $51 million operations to $44 (million), and unfortunately even closing one facility won’t cover that deficit,” he said.

Sivertsen said the six Pioneers Homes in Alaska already are holding beds vacant because previous cuts led to staffing shortages. He said if the Senate cut remains and the Ketchikan home is chosen for closure, it would have a big impact on the community and individual families.

“The Pioneers Home in Ketchikan employs 70 people and it has about 45 residents,” he said. “There’s nothing in the community that’s available to take those displaced residents if they decide to close that facility, and I don’t know how they would do that.”

In their budgets, the governor and the House called for funding of about $51 million for Pioneers Homes.

If the Senate Finance Committee’s proposed cut makes it into the Senate’s approved budget, the issue will move into a conference committee between the House and Senate.