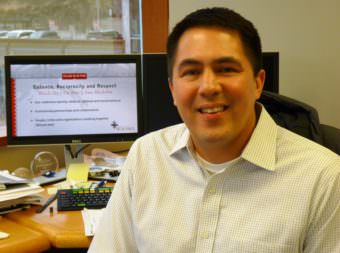 Anthony Mallott is president and CEO of Sealaska, the Juneau-based regional Native corporation that’s distributing $10.6 million to its 22,000 members this month. (Photo by Ed Schoenfeld/CoastAlaska News)

Lower North Slope oil prices are taking a bite out of Native corporation dividends 1,100 miles away.

Sealaska, Southeast’s regional corporation, just announced it will pay out $10.6 million to its more than 22,000 members mid-month. That’s a third less than last year’s spring distribution.

Sealaska President and CEO Anthony Mallott said it’s dropped because of lower payouts from a pool of natural-resource earnings from all regional Native corporations.

“Arctic Slope Regional Corp. is seeing declining oil royalties from the fields that are on their lands,” he said. “And that offers direct 7(i) (payments) to Sealaska and all of the other regionals.”

7(i) is a provision of the Alaska Native Claims Settlement Act describing how corporations are to share resource revenues. The settlement act created the corporations.

This month’s Sealaska payments will range from $133 to $609 per 100 shares, depending on membership in other Native corporations and other factors.

Resource revenue pool payments are the difference between the two amounts.

Mallott said the second-largest dividend revenue source is one of Sealaska’s investment accounts.

“The Permanent Fund distribution is very stable,” he said. “It offers close to $4 million annually in distributions.”

The other source is the corporation’s own business earnings, which have been down. They dropped significantly in 2013 after its construction subsidiary lost more than $25 million.

Mallott said that’s hitting the earnings part of the distribution because the corporation averages such revenues over five years.

“As we move out of that effect, as we move into 2018, we fully expect the distribution to have a good upward trajectory,” he said.

This chart shows the different shareholder classes and what dividends they’ll get in the April 14 distribution. (Graphic courtesy Sealaska Corp.)

Class B also covers those enrolled in an urban corporation, such as Juneau’s Goldbelt. They receive the full $609 per 100 shares, including the resource pool money.

Class A also is those enrolled in a village corporation, such as Kake Tribal. They don’t get the resource pool payment, so their total is only $133 per hundred shares. Sealaska pays the difference directly to the village corporations, which may or may not pass it on to shareholders.

Class C is at-large shareholders, who are not enrolled in another corporation. They get the full amount.

Mallott said about a quarter of shareholders are in village corporations and about three-quarters are with urban corporations, or none at all.

Class D is descendants of original shareholders, who receive the smaller payment, as do those who became shareholders after the original enrollment date in class L.

Many shareholders hold more than one class of stock, due to inheritance or gifting.