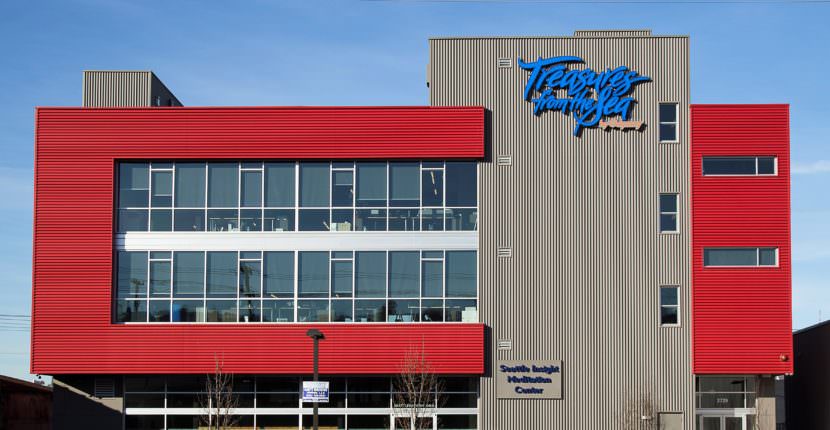 But a critic of Southeast’s regional Native corporation doubts they will make much money.

It sells a variety of seafood, under the Treasure of the Sea and Chef’s Treasures brand. It also has a food service division and produces custom products for other companies. 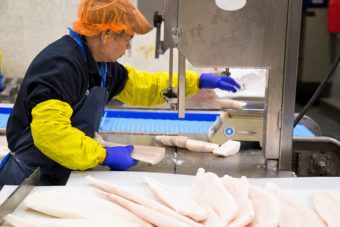 A worker portions halibut as part of a processing line at Odyssey. (Photo courtesy Sealaska Corp.)

“They do a lot of breaded and battered processing. But the real value was the people and the platform that provides a channel to market,” he said.

Sealaska bought 51 percent of the company, so it has majority ownership, Mallott said.

But the Juneau-based corporation will leave Odyssey’s business model and management team in place.

“The base of their global supply chain provides a good stable income, good cash flow,” he said. “The growth that we’ll be looking for is adding more wild Alaska product to their marketing channels.”

Odyssey is Sealaska’s second seafood investment in a year. And it’s part of an effort to change its direction.

“They were a great ground-floor platform for us to build upon, even with the minority position,” he said. “They have a client base, they have the expertise to get products directly to the retail market.”

Independent Packers employs about 180 people. Odyssey’s staff is about 200.

Sealaska said both could provide jobs for its shareholders who live in the Pacific Northwest, and not just on the processing line. 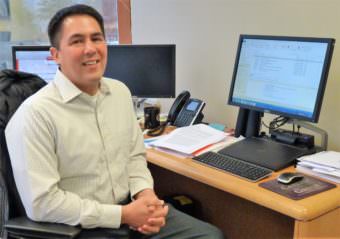 Anthony Mallott is CEO and president of Sealaska Corp., which is headquartered in Juneau. (Photo by Ed Schoenfeld)

Sealaska has not released the financial details of its most recent seafood investment. Mallott said that will be in the corporation’s annual report, to be released in early May.

“This really goes to the point that Sealaska is not very transparent in its financials and financial dealings with shareholders,” he said.

Fluetsch, who is running for Sealaska’s board of directors, is an investments manager for the city of Santa Fe, N.M.

He also said the processor investments are the wrong approach to making money.

“This is taking all the risk of a private company, when they could have went out and bought a diversified portfolio of global fish companies, if they really want to get into the fishing industry, and earn a much higher rate of return,” he said.

Sealaska’s Mallott said the two companies will bring in more revenue than such investments. He also pointed to the corporation’s existing investments in the stock and bond markets.