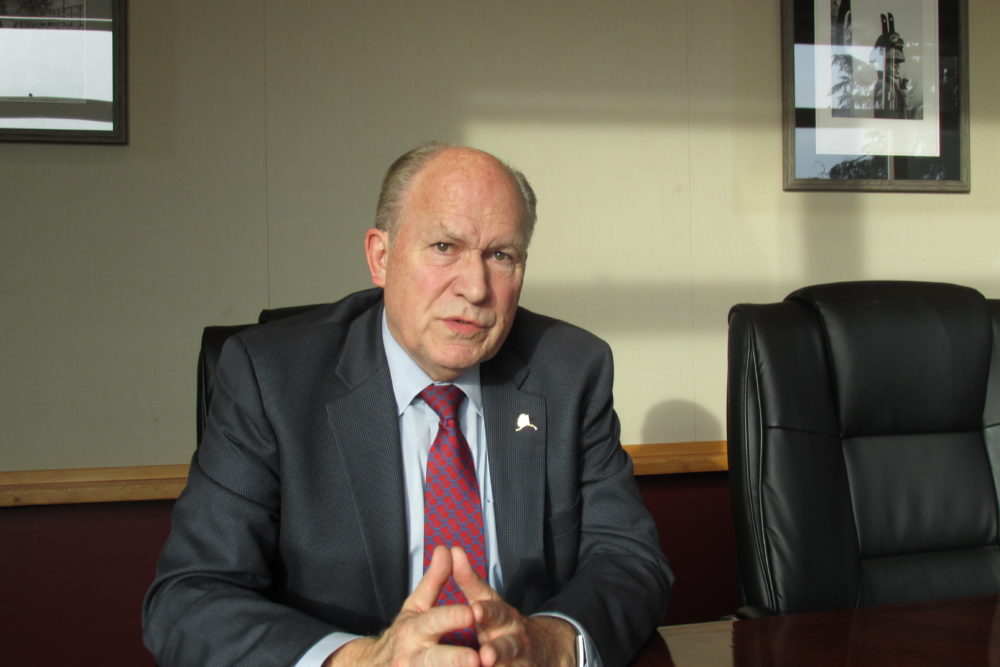 Governor Bill Walker at a press event prior to the KetchaLove fundraiser, April 22.

Governor Bill Walker made a brief visit to Ketchikan Saturday to attend a fundraiser for Ketchikan Youth Initiatives. Walker met with the media before the event.

Walker was invited by organizers of the KetchaLove fundraising event. Proceeds benefitted KYI’s youth center project. Walker says he has attended a number of events like this throughout the state.

“Just to thank those who have stepped up and said, ‘We’re going to self-fund.’  I don’t have a lot of folks coming to Juneau asking for money, some, but I think people recognize the fiscal situation that we’re in.”

At fundraising events like this, he says occasionally, and if appropriate, he will offer a day of shadowing the governor as an auction item. Walker says this is usually bid on by a parent or grandparent of a high school student. Walker spoke about some of the experiences students had.

“One day we interviewed Superior Court judges, and they sat in through the entire process. And after each process we would go around the table and get input on what everybody thought. And the young man, he was very quiet. I said, ‘No. No. This is an equal participation. Who do you think was the right person to be the judge?’ He got very involved in the discussion, and it was exciting to see that.”

He says another student kept returning after his day of shadowing to learn more.

“But after his third day I sat down with him. I said, ‘What did you learn?’ He was born in Alaska. He says, ‘I learned more about Alaska in these three days than I have in my entire life. All those courses I’ve taken on Alaska history, and other areas. I was just fascinated by it.’”

Walker also spoke about the state’s budget crisis. He says he’s hopeful a compromise will be found.

“I believe that the desire is to finish the job, to finish it this year. Everybody has a little different definition of when it’s fixed, when Alaska is fixed. What does that look like? I’m engaging more, now, than I have in earlier in the session. I put a few bills out there to let them bring along what they’re going to bring along rather than me presuppose what it is that they’re going to have an appetite for.”

Walker says the Permanent Fund Protection Act and restructuring of the Alaska Permanent Fund would take care of about two-thirds of the budget deficit, but additional revenue is needed to solve the problem. He says he would like to see things fixed rather than just getting through the crisis.

He says if it isn’t fixed, next fiscal year will look like the last year, and not much will get done.  Walker says he wants Alaskans to understand that there already have been numerous reductions in the budget, including cuts to programs and closures of facilities. He says additional revenue sources are needed to maintain existing programs, and to build a sustainable future.