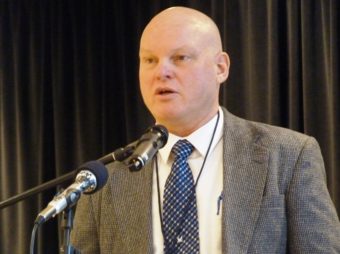 The man overseeing the Alaska Marine Highway System is leaving his post.

Capt. Mike Neussl said he’s departing for personal, not professional reasons. He needs to leave the state for a while to care for an ailing family member.

He said he’ll miss his coworkers, but not the long hours.

“It’s an important job and I clearly enjoyed doing it. But it is a stressful job and these are very challenging times and it’s not been easy,” he said.

His final day on the job will be Friday, May 12.

“I’m still working with the governor to kind of lay out the plan for leadership of the marine highway system. But at least for the near term, we’re going to operate with the folks we have in the leadership positions,” he said.

Neussl has been a Department of Transportation deputy commissioner for a little more than two years. He also ran the ferry system in 2011 and 2012. He’s a retired U.S. Coast Guard captain who left that post in 2010 after 30 years of service.

Robert Venables, who chairs the state’s Marine Transportation Advisory Board, said Neussl will be missed.

“He obviously had a firm grip on what was happening and he ran the operation as well as one could expect under the circumstances,” he said.

His departure comes as a panel of stakeholders considers alternative approaches to ferry management. So far, it’s recommended the marine highway change from a state agency to a public corporation.

Venables staffs that effort. He said Neussl’s resignation could impact the project.

“Perhaps there’s an opportunity to take a look at that position and see what could be done structurally to bring about some changes that have been looked at in this AMHS reform project,” he said.

The ferry system cut ships and sailings in recent years as costs increased and state funding declined. That’s part of the motivation behind the alternative management effort.

It’s being done under the auspices of the regional development group Southeast Conference, with support from the state and other entities.