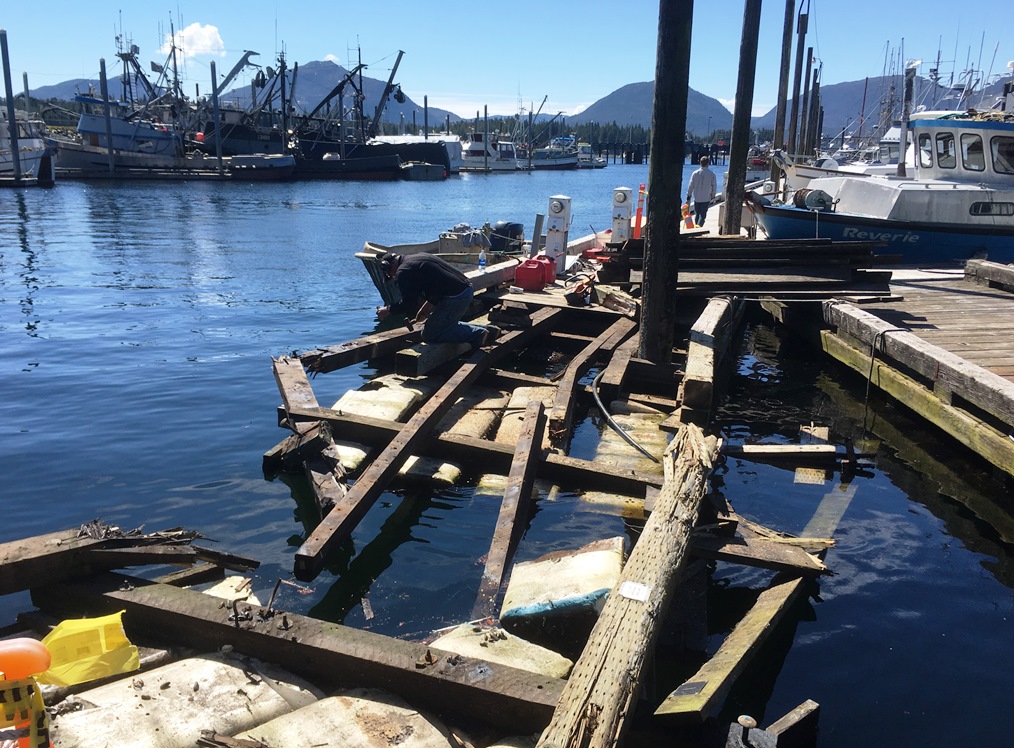 A city crew is working on repairs to Float 4 at the downtown Thomas Basin Boat Harbor after a fishing boat hit the float Wednesday. (KRBD photo by Leila Kheiry.

A seiner hit a wooden float at Thomas Basin Boat Harbor early Wednesday morning, causing significant damage and cutting off electricity and water service to the float for at least the next few days.

City of Ketchikan Port and Harbors Director Steve Corporon said the incident happened a little before 7:30 a.m. The city got a call that the Crystal Bay, a 58-foot fishing vessel, had collided with Float 4.

“I was down there in less than 10 minutes and ascertained that it had basically severed Float 4 from the base of the main float,” he said.

There were no injuries from the incident, although Corporon said at least one other vessel – a charter fishing boat – was damaged in the collision.

Corporon said a contractor the city often works with, Western Dock and Bridge, had a representative in town and

the city was able to get them started working on repairs right away.

“We did get by about 9:30 a section of old float from Bar Harbor towed down there and installed as a temporary bridge from the main float over to Float 4, and that’s serving people for now,” he said. “If all goes well, we should be able to have everything fixed within the next three days, probably.”

Corporon said the city’s Port and Harbors Department will work with vessel owners who use Float 4, if they need electricity and water service while repairs are under way. To get those services, vessels might have to move to another float or harbor.

Corporon declined to speculate about what caused the accident. He said the U.S. Coast Guard is in charge of that investigation.