McPherson Music: Much more than just a music store 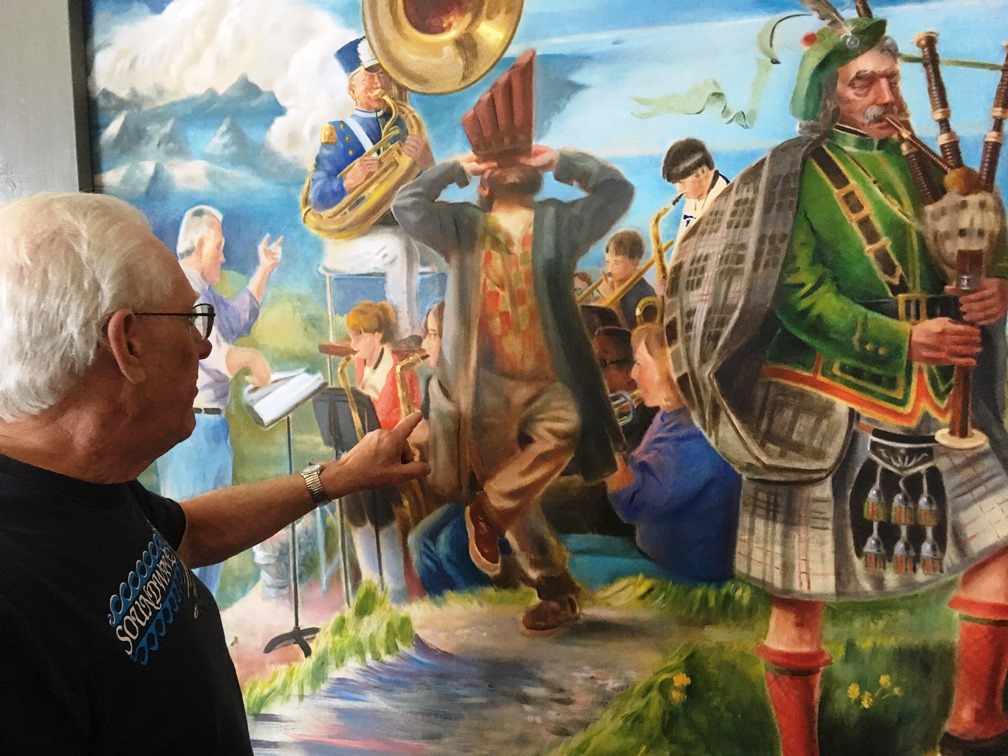 Roy McPherson talks about the Dave Rubin mural that decorates the back wall of McPherson Music. (KRBD photo by Leila Kheiry)

McPherson Music has been the cornerstone of Ketchikan’s music scene since the 1980s. The shop has been much more than just a music store. The McPhersons have offered music lessons, and led jazz and concert bands to help entertain the whole community through cold, rainy winters.

Now, though, McPherson Music is for sale.

But, the internet, with its promise of low prices and free shipping, was the final blow.

Roy McPherson leads the way through the bare, echoey shop. Walls that once held hundreds of guitars on display are empty. The pianos, amps, speakers, and drum sets are gone.

“Of course, it was all covered with photographs and things all down the hall. This room was full of pictures,” he said. “But, we have to get it ready in case it goes because there’s so much to move.”

The store hasn’t sold yet, but Roy and Tina McPherson are prepared to vacate. They even have a spot ready in their home for a colorful mural by Ketchikan artist and musician David Rubin. The mural on the back wall depicts longtime members of various McPherson-led bands, along with Roy himself.

The bands are a huge part of McPherson Music. They started in the late 1990s, when Roy – a former high school band teacher — and Tina – who plays trombone — decided to form a youth jazz band.

Roy said forming the Windjammers was Tina’s idea, but the band members picked the name. 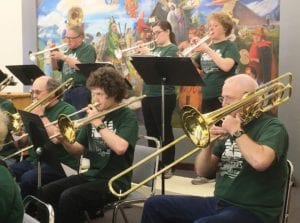 The Windjammers perform during a free concert at McPherson Music. (KRBD photo by Leila Kheiry)

“And we had about 32 kids sign up, something like that” and more kids wanted to join so they started a second one. That became the Soundwaves. Soon, both bands were full.

“And then, we decided well, let’s start a class,” he said. “We’ll call it Discovering Jazz Fundamentals. We thought we’ll have a dozen kids, maybe. We’ll get them ready for the Soundwaves. Thirty-three signed up.”

Youth band enrollment later declined as the population of school kids dropped. So McPherson scaled back to just the Windjammers. They recruited adults to fill some holes in the band, and the kids grew up.

“And now the Windjammers are all adults,” he said. “And it’s a red-hot band. There is not a weakness in that band. They can play anything.”

A few days later, the Windjammers gather for a free concert at the store. Drummer Kim Kleinschmidt warms up before the performance, drumming out a rapid beat on a table top.

He worked at McPherson Music for decades, and said the store gave him a second chance at a career in the music business, “because I didn’t complete my college degree in performance.  To come back and work with Roy – the finest educator I ever worked with, even including all the college career I had in Washington State.” 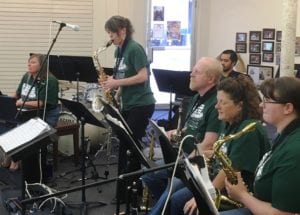 Windjammers tenor sax and flute player Jamie Karlson is the music teacher at Schoenbar Middle School. She was a toddler when she first walked into McPherson Music.

“I grew up in this store,” she said. “I think my Mom had us coming in when I was 2. And so, coming in and growing up with them has been awesome. I started playing flute in their Discovery Jazz Band, their youngest ensemble, when I was in seventh grade.”

Karlson said she’s not sure she would have had the same career if McPherson Music hadn’t been there for her. And, she said, it will be a sad day when the store sells. Karlson points to some of the metal support poles in the shop, covered with signatures.

“You see all these names of these kids that have been here years and had these experiences. Some of them have gone on to do incredible things and some of them have passed away and we honor their memory,” she said. “It’s just — this place has a lot of history.”

One of the kids who passed away was Sam Pitcher, who died in 2003 at age 16. A music scholarship was founded in his name, and there’s a display of photos on the back wall showing scholarship winners.

Karlson’s photo is there, along with many others. Earlier, when the store was empty, Roy McPherson gave a

rundown of what instrument each of those kids played, where they ended up and what they’re doing now.

“She went through school at Brigham Young University and is now a teacher,” he said, pointing to one girl, then the next. “She has a degree in music. She still plays French horn. She played in community groups in Portland. She’s now an engineer. No, yeah, she’s an engineer.”

Like Karlson, some of the kids pictured on the wall are in the Windjammers. There’s also a City Council member on saxophone; a boat captain on trombone; and a physician on guitar. It’s a true community band.

A good crowd shows up for the concert. McPherson leans against one of those poles covered with his students’ names as he introduces the band and the Count Basie song they’re about to play.

“We used to pull this piece out every once in a while, see if the band was maturing,” he told the audience. “It would beat us up and we’d put it away. Next year, we’d pull it out again and get a little closer. Now we just pull it out and play it, because this band can do it.”

The store might be for sale, but the band isn’t going anywhere. McPherson plans to continue leading the Windjammers and his concert band, keeping that music magic alive. 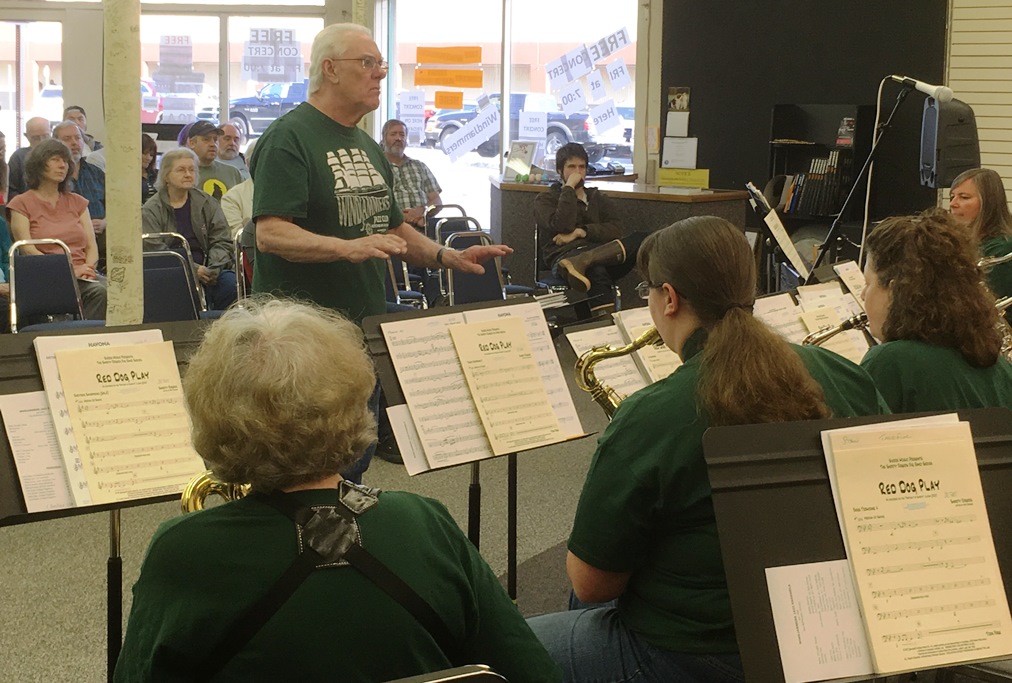