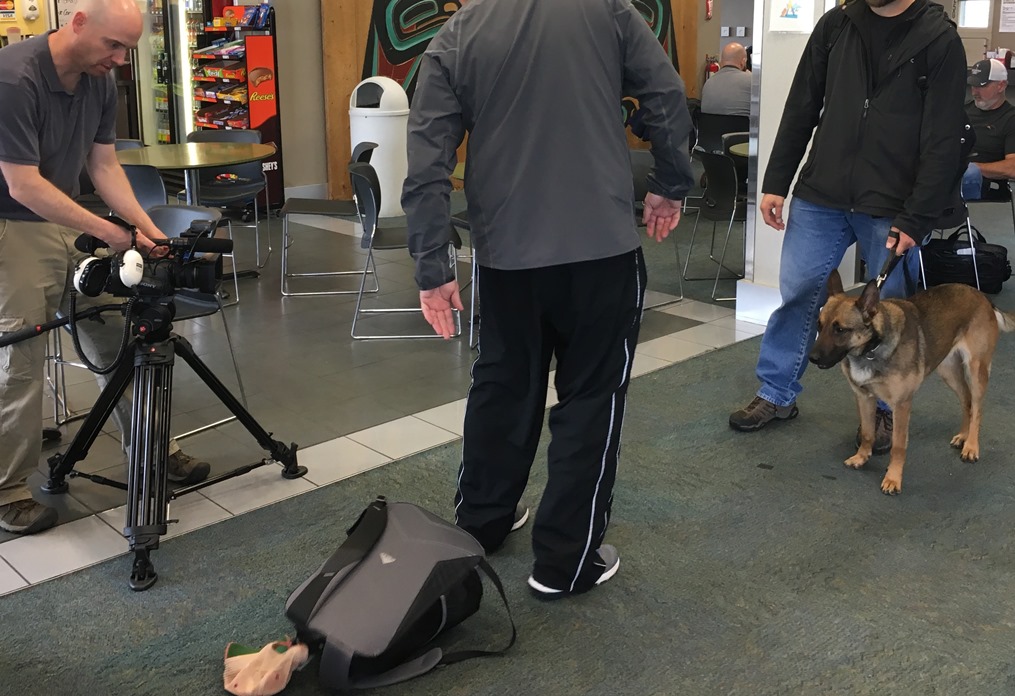 Earlier this month, a handful of Ketchikan residents grabbed carry-on luggage, boarded the airport ferry and headed across the Tongass Narrows to the Ketchikan International Airport.

They weren’t traveling anywhere, though. They were extras in a state anti-drug video.

We have to wait for Transportation Security Administration officers to let us head up to the gate. In the meantime, Freeman makes sure everyone signs a release as he talks over the plan.

“Did everybody see the storyboard? We’ll shoot a few more shots than what are in that,” he says.

“Somebody else is in charge of the voiceover, so if they change things on me I want to be able to deal with that.”

A storyboard is a map of sorts, showing footage Freeman plans to shoot before the next plane is due to land.

One of the local “stars” of this public service video is Troopers drug investigator Larry Duran. During the shoot, he and his dog, Misty, will bust a drug runner, played by local Alaska State Troopers dispatcher Steve Hayburn.

Freeman and Duran talk a little about whether Hayburn looked enough like a drug dealer, in his loose, comfy track suit.

“They come in all ages, all races, all walks of life,” Duran says. “Steve – he’s our yuppie version.”

“Well if I were going to move drugs, I would try to look all clean cut,” Freeman says, laughing before he clarified: “Not that I would ever do such a thing.”

Duran gives everyone a briefing about Misty, a Belgian malinois who he says is not aggressive, but quite motivated, especially by toys. Or anything that might be a toy.

“You may have something in your hand that looks like a toy to her, or she could make it a toy,” he says. “Like the fuzzy thing at the end of a microphone could be perceived by her as a toy.”

So, no waving the microphone in front of the drug dog.

As a boarding announcement is made, we are given the go-ahead to head up to the gate, but are warned to stay together and not interact with any screened passengers. 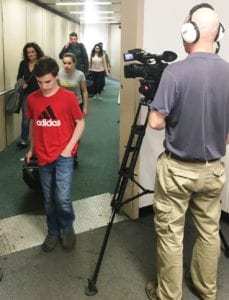 Justin Freeman, right, films Ketchikan residents who volunteered to be part of an anti-drug PSA for the state. (KRBD photo by Emma Atkinson)

In the gangway tunnel, Freeman sets up his tripod and video equipment, and organizes a shot of passengers disembarking. There isn’t really a plane at the end of the tunnel, but that won’t be obvious in the shot.

“Steve will be in front of you guys and we’ll have the family in front,” he says. “I think that’s poignant. Here’s this family with kids and here we have a drug dealer and that’s really a big bummer. It’s drama, too, right?”

Everyone gets into place: Families, couples, individuals, drug runner…

“OK, ready? Action! Cut! Reset!” Freeman directs. “I’m going to get a couple of different versions. Very exciting, I know. Is it everything you hoped it would be?”

They did maybe a half-dozen takes on the gangway, then they moved into the terminal for the next shot.

This is where Duran and Misty the dog first confront the drug dealer. Misty isn’t visible in this shot, so she’s still out in Duran’s car, but Hayburn has to pretend to see her, and be concerned.

“Normally, I say, ‘I’m Investigator Duran with the Troopers, would you mind if we talk in private?’” Duran says.

Freeman nods, and gives direction to Hayburn: “And you’re like, ‘Uhhh. Yeah, I guess.’ You don’t want to, obviously. You know what the deal is.”

That shot also requires multiple takes. Then Duran goes to get Misty. Her first shot is footage of looking at Hayburn.

Misty’s special toy is a well-chewed blue Kong Wubba. As soon as it makes an appearance, Misty’s focus is 200-percent on the toy.

Duran hands the Wubba to Hayburn.

“I’d put that in your pocket,” he says. “That’ll make her kinda chill out. Otherwise, she’ll start barking in a moment, wanting to play.”

Duran glances down at Misty, staring hard at Hayburn, and says, “It’s about to get real, isn’t it, dog?”

With Misty completely focused on Hayburn, that shot goes fast. Then there is a close up of her walking next to Duran; Duran, Hayburn and Misty headed toward the private room where the search will be filmed, and then the search scene, where Misty and Duran find the drug dealer’s stash.

Freeman says the video was requested by Gov. Bill Walker’s office, part of the governor’s overall push against opioids and other illegal drugs hitting Alaska communities.

“If it’s effective and we reach the right people with it, then we have fewer drugs,” he said. “So that’s good. That’s the point.”

For the Ketchikan actors involved – it also was just fun.

Freeman filmed additional footage with more volunteers the next day at Ketchikan’s Alaska Marine Highway System terminal. He’s not sure when the video will be completed – that’s up to the governor’s office.