Rep. Dan Ortiz of Ketchikan is relieved the Alaska Legislature approved a budget in time to avert a government shutdown. But, he says there’s plenty of work left for state lawmakers to finish. 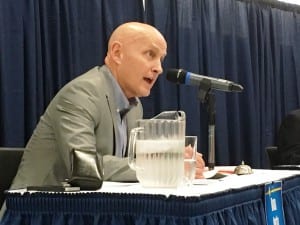 Rep. Ortiz said he feels good about reaching a budget deal before the June 30 deadline. It was a compromise, and he said nobody got everything they wanted.

But, he said, the budget helped protect some things important to House District 36, which includes Ketchikan, Wrangell, Hydaburg, and Metlakatla. One is Alaska Department of Fish and Game commercial fisheries management.

“We did a better job of not getting to the point where we were losing commercial fish opportunities because of the fact that their budget has been cut,” he said. “What we were able to do with the Fish and Game budget was move some funds around so we could direct what resources they had towards commercial fishing industry, and hopefully avoiding lost opportunities for fishermen.”

Ortiz said he also is pleased that funding for public schools remained intact.

Before this legislative session began, Ortiz had said that education, along with everything else, would be on the table for potential cuts. He said that, with input from constituents, he and other lawmakers decided during the session to keep public schools high on the priority list.

While there were some successes in the budget, Ortiz said it also was a disappointment, because the Legislature was unable to decide on any new revenue source to fund a long-term fiscal plan.

And “new revenue” means some kind of tax. Ortiz said one change he supports is oil-tax credit reform. There’s general agreement that oil taxes will need to be changed, he said, but how that happens remains under debate between the House and Senate.

The Senate does plan to reconvene to talk about that very issue.

“And there’s a possibility that the House will convene as well, and we might come up with some sort of compromise on HB111, which would then, I think in the hopes of the oil industry, put that particular issue to rest,” he said.

But, Ortiz said if the Legislature comes up with a partial compromise, he worries that a real solution would be

pushed off into the far distant future.

The Legislature did agree to cap Alaska Permanent Fund dividends at $1,100. He said that keeps about $700 million in the Permanent Fund to be reinvested and generate more money for the future. But that still didn’t add anything to the revenue side of this year’s budget, so the Legislature also agreed to again use budget reserves.

“And that’s what we have been drawing on over the last five or six years, and we’ve gone through $12 billion in savings up to this year and now I think we’re going to draw another $2.5 to $2.7 billion in savings, which will take our constitutional budget reserve down to below $2 billion, or right at about $2 billion,” he said. “So, we can’t use that as a solution in the future.”

Mostly because there’s no longer enough in there to cover what the state’s budget deficit has been each year since oil prices tanked.

Alaska’s primary source of state revenue is oil taxes. With no increase in oil prices expected in the near future, Ortiz said the state most likely will need to use some Permanent Fund revenue, along with some kind of new tax.

Ortiz said paying no state income or sales tax has been great.

Ortiz agrees that the Legislature needs to continue looking for ways to trim the budget, but said it’s not possible to cut the budget enough to cover the deficit.

So, what kind of tax does Ortiz prefer?

“I just want a fiscal solution. I’m not going to be stuck to any particular type of a tax,” he said.

He said there is a strong argument for a motor fuel tax. That wouldn’t be enough, Ortiz said, but it would help. And he plans to push for a real fiscal solution, which he said will require tough, unpopular votes.

He said he’s ready to cast those votes.

“If it means that costs me politically, fine. I’m OK with that,” he said. “Because I just think in the end, I’ve gotta look people in the eye and I gotta say, ‘Hey, you may not like it, but I can show you these numbers and I can show you that I’m acting in what I think is the state’s best interests.’”

Ortiz said he believes voters will recognize the need for tough votes, and respect lawmakers willing to make them.

The Legislature is in special session now, but lawmakers took a break after approving the budget compromise. The Senate plans to reconvene July 10th to talk about oil tax credits.