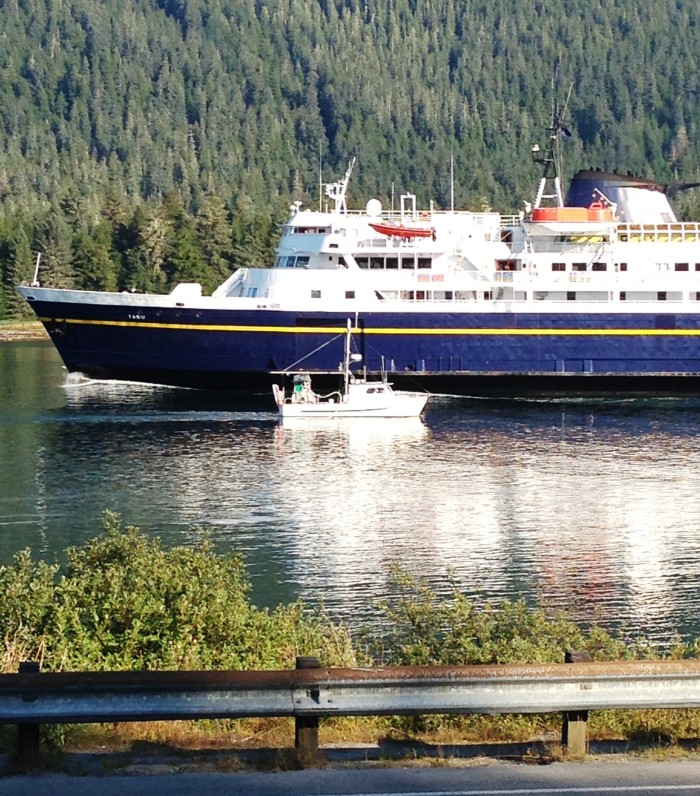 The Alaska Marine Highway ferry Taku sails into Wrangell Narrows off Petersburg in 2014. It was tied up the following year and is for sale.  (Photo by Ed Schoenfeld/Coastalaska News)

Bids were originally due by July 7. Officials pushed that back a week and a half on Monday. Now, bids aren’t due until Aug. 8.

Someone is interested in buying the retired ferry Taku. As a result, the Alaska Marine Highway System is giving interested parties an extra week and a half to submit bids.

The latest attempt, advertised June 19, listed no minimum price. Bids were scheduled to be opened July 7. That deadline was then extended until July 18.

Ferry spokeswoman Meadow Bailey said the new deadline came at the request of an interested party.

“Obviously, there is not a huge rush on this. We have been working with the Taku for several months now. So we were happy to fulfill that request,” she said.

Bailey said the marine highway is not identifying the interested party or parties.

The Taku was tied up in 2015 to save money. It worked, but needed minor repairs and certifications required for all passenger ships.

It’s been moored at Ketchikan’s Ward Cove since then.

The Taku sailed mostly Southeast routes. It’s about 350 feet long. It can carry up to 50 vehicles and 350 passengers. It has 40 staterooms, a cafeteria, observation lounges and a covered solarium.

If it can’t be sold, it could be scrapped.