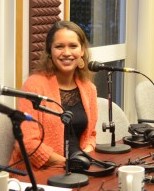 Ketchikan School Board Member Misty Browne has resigned her position on the board, effective immediately.

In an email Tuesday evening, Board President Trevor Shaw announced that he had received Browne’s resignation that day. He says the Board will consider formally accepting it during Wednesday’s regular meeting.

In a telephone interview Wednesday morning, Browne said it was a difficult decision. She said she has been thinking about whether to resign from the School Board for the past six months.

“And circumstances in my life are just such that I need to really focus on work and myself and my family at this time,” she said. “I’ve really enjoyed being on the School Board. It’s been a great experience, but I also think it’s a position that, it’s really important that people that are in those seats really need to be able to have the time to devote to be able to effectively advocate for our schools, and I don’t feel I’m able to give that my all at this point in my life.”

Browne has served about five years on the board. She was elected to a three-year term in October of 2015. She served a previous term from 2011 to 2014, then took a year off before running again.

Browne said if circumstances allow, she would consider running for the School Board in the future.

“I absolutely potentially see myself doing that,” she said. “It’s something I’ve very much enjoyed. I think my ability to collaborate with groups of people is pretty well-honed. I wish I could stay. I just know it’s not the best choice for me right now.”

When asked what School Board accomplishment she is most proud of, Browne said she’s pleased with the results of her focus on fiscal accountability.

Browne also has been a voice for Alaska Native students.

“Being the only Native member on the Board, I do feel a little bit of guilt stepping down, because I think it’s important to have that voice,” she said. “I think diversity is really important, and I think those relationships have benefited from my presence on the Board.”

Browne said she hopes other Alaska Native residents step up to run for the School Board.

The Board will have 30 days from the time it accepts Browne’s resignation to appoint someone to fill the seat until this October’s municipal election. Whoever is elected to that seat this fall will serve one year, finishing out Browne’s three-year term.