Have you ever been walking along, minding your own business, when you stumble upon something that seems a little out of place?

A red plastic bag peeking out from behind a statue, a beaded dragonfly perched on a low-hanging branch, or maybe even something that looks like trash, but after closer inspection turns out to be something beautiful?

Chances are, if you live in Ketchikan, this has happened to you.

Thanks to Marissa Hockema and her friend Jennifer Kinney, residents and visitors of Ketchikan are likely to happen upon half-hidden pieces of original art, placed lovingly by members of the Facebook group Ketchikan Random Acts of Art.

Hockema and Kinney started the group in April of 2016 after realizing that participation in a statewide free art-sharing program was impossible for those living on the island. Here’s Kinney.

“It totally blew up right away,” she said. “We took a few days, or a few weeks in the beginning, and we just pumped out as much art as we could and put it out in the community just to see what would happen, and it took off. And it was amazing.”

The premise, they said, is to make art and hide it somewhere around town. When you find art, you’re instructed to post in the Facebook group that you’ve found it. That’s the whole point, Hockema said.

“We have had a lot of younger people – and even some older people – that really get the joy out of knowing their art was appreciated or enjoyed,” she said.

I was really curious about what the process was like. So I asked Hockema if I could ride along with her on a recent outing to hide some of her art.

On a Friday afternoon, I climbed into the passenger seat of her big maroon truck. Inside sat Hockema’s art-hiding clan: her younger sister, Cassi, niece Taylor, and two young daughters, Makenna and Raeleigh. We headed north, toward Ward Lake.

“No, I don’t wanna do all the way around, because Makenna doesn’t have any shoes on,” Hockema laughed. “It was not me – her dad got her dressed, and did not put shoes on her, even though he knew what we were out doing.”

“You know, sometimes, you just forget to do the shoes,” I said.

We arrived at the Ward Lake campground. Everyone climbed out of the car, art in hand, and we began to search for the perfect hiding spot.

“Raeleigh, you wanna grab a piece?” asked Hockema. “Cassi, you can grab a piece. You want your piece? Or that one?”

“So how do you make sure it doesn’t get wet?” I asked.

“We tie it shut,” Hockema said. “And then, like for hers, being in a big bag, we put it somewhere not out in the open.”

“So, that’s like, the bear boxes are good for that.”

The girls walked around, craning their necks to find a dry spot for their artwork. Cassi carried baby Makenna, who clutched a painted ceramic tile in her hand.

Raeleigh decided one of the bear boxes was a suitable spot for her art.

“Want me to help you?” asked Hockema. 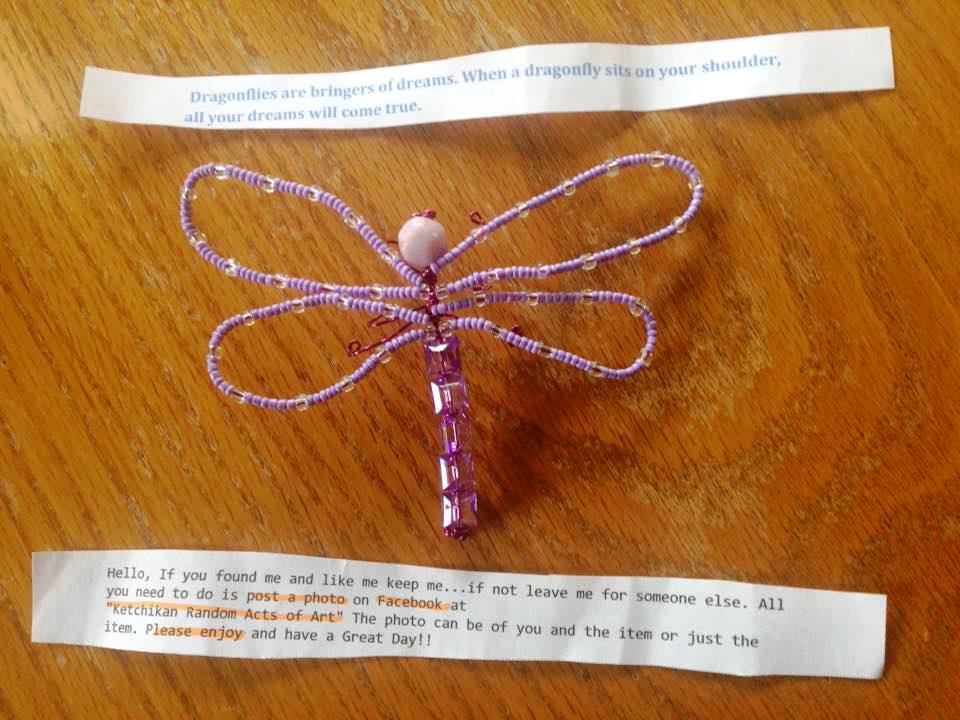 “You wanna take a picture of it?”

We moved on, slowly circling the campground and hiding art.

“Let’s try to hide them in the trees this time,” Hockema said. “Like that one – that’s somebody’s campground – nobody’s there, though. You can hide it over here. And when somebody comes, they can find it.”

Soon enough, all of the pieces have been hidden, and we headed back to town. The girls were satisfied with their hiding spots.

I also got to talk to a couple of people who have found art.

Sheila Bird is one of those people. She said she’s found a ton of different pieces of art through the group.

“So, let’s see…I’ve found canvases of paintings, I’ve found warm baked goods, I’ve found candles, I’ve found pictures…and yeah, it’s a really fun experience, having to be in the same area and having other people look for this thing, and then you end up getting the first find, and you just get so much of a rush,” Bird said.

Deb Davis, on the other hand, just recently found her first piece. She was out walking a friend’s dog in City Park.

“As soon as I saw it, I thought, ‘I wonder,’” she said. “Because it didn’t look like a used plastic bag; and I got closer to it, and sure enough, it had this neat little piece of art in it.”

I asked Davis how she felt about her first-time find.

“Well, especially when it’s raining and it’s gray, it was pretty sweet,” she said. “And I just think it’s such a cool thing to see in Ketchikan that people do stuff like this. It just totally brightens your day, to have this little, as you say, random act of art, show up in your hand, and I just think it’s really, really cool.”

I called Hockema for some final details about the group. Here’s the end of our conversation.

“If people see art around town, then they should – should they assume…” I started to ask.

“Pick it up! Please, pick it up,” she said. “We’ve had people post, ‘Oh, we found this, but we left it.’ Pick it up. Take it with you. Because whether you’re visiting Ketchikan, or you might just be having a bad day, and you look up, and that piece of art will remind you that there is still good out there. There are people out there that care.

“And they don’t need to know who you are. We don’t ever have to meet face-to-face. We don’t expect anything from it, other than, ‘Hey, I found your piece of art.’”

Hockema said any and all art aficionados are welcome to join the Facebook group. She doesn’t turn anyone away, she said – just be kind and post what you find.

Do you have questions about Ketchikan? Something you’ve always wondered but never really had the chance to find out? Let Emma know by submitting your queries to KRBD’s Facebook page or by calling KRBD at 225-9655.