Ketchikan Uncovered: digging up dirt on the Schoenbar Mine

Anyone who’s spent any meaningful amount of time in Ketchikan knows the name Schoenbar.

Aaron Spencer, who’s lived here about two years, said his interest in the history of the name was piqued when his daughter started attending Schoenbar Middle School.

“I guess it’s named after a pretty famous guy that was here right around the turn of the century, in 1900, John Shoenbar,” he said. “And he had a mine out there that he had bought from somebody else locally. It used to be called the Laskawanna Gold Mine, and he bought it in 1900. So I started wondering, okay, well, where is this mine? Is it still there? Is it not?”

Spencer had his facts partially right. John Shoenbar was a real guy who came to Ketchikan to strike it rich in the Klondike Gold Rush. And the former name of the mine could be Laskawanna. But according to the US Geological Survey, it was called “Laskawa.” And according to Patricia Roppel’s book about gold mining in Southeast Alaska, the mine’s name was “Laskawanda.” Still more sources call the mine “Lackawanna,” and others “Laskawonda,” with an “O.”

This is just the beginning of the story of John Shoenbar and his mine. First thing’s first, though – the middle school, major road and bypass in Ketchikan that all bear the name “Schoenbar” are somewhat incorrectly named. John Shoenbar’s name didn’t have a “C.”

The guy also reportedly went by “Colonel Shoenbar,” despite the fact that he wasn’t actually a colonel.

I talked to the Senior Curator of Collections for the Ketchikan Museum Department, Hayley Chambers, who told me he began calling himself “Lieutenant Shoenbar” while mining for silver in Nevada.

“By the time he comes up to Ketchikan, he’s calling himself a colonel,” she said. “Colonel, you know, being a title particular to mining engineers at the time. That’s all fine and good, but he didn’t have any schooling as a mining engineer.”

Various sources paint him as an adventurous man who traveled across the US in the late 1800s, seeking his fortune and unsuccessfully trying his hand at different trades. 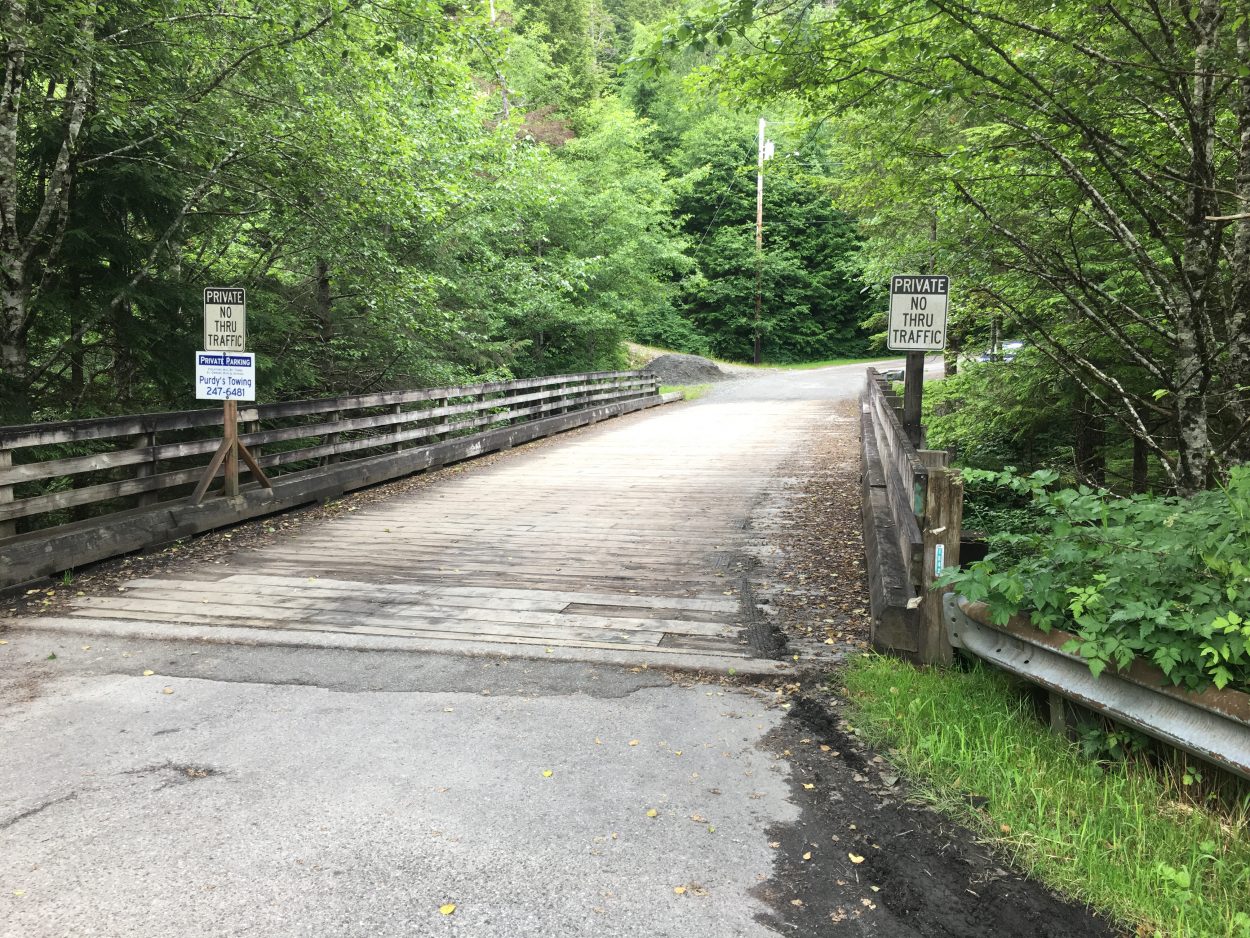 The bridge over the ravine that runs parallel to Fairy Chasm Road. This is the area thought to be home to whatever is left of the Shoenbar Mine.

A SitNews article by June Allen from June 2002 described him as playing fast and loose with the truth. It was a fair assessment, given that his birth year is still in dispute, nobody seems to be able to tell if his wife’s name was Mamie or Marie, and it’s likely that he scammed New York businessmen out of more than a million dollars in investments for a Ketchikan gold mine that had yet to produce anything of value.

The more I found out about this guy, the more fascinated I became.

But Spencer’s question was about the current state of the mine, not about the colorful story of Col. John Shoenbar-without-a-“C.”

So, I turned to the US Geological Survey.

“We would never call it a mine, because it didn’t have production,” said Ric Wilson, a USGS research geologist who works up in Anchorage. “And by definition, mines have production.”

Shoenbar, Wilson said, is classified as a prospect because it never produced anything of note.

“Why would they have thought that there was anything valuable in the ground?” I asked.

“So there were a number of veins that were developed around this gabbroic pluton that had pyrite and chalcopyrite, which are two sulfide minerals, in them, and can sometimes be gold-bearing,” Wilson explained.

“The Schoenbar Mine was more of an idea than an actual operation,” Chambers said. “There were a couple of tunnels built, but more promotional than actual mining.”

So, these tunnels. Where were they? What happened to them? What state are they in today?

Chambers didn’t think they were underneath Schoenbar Middle School. 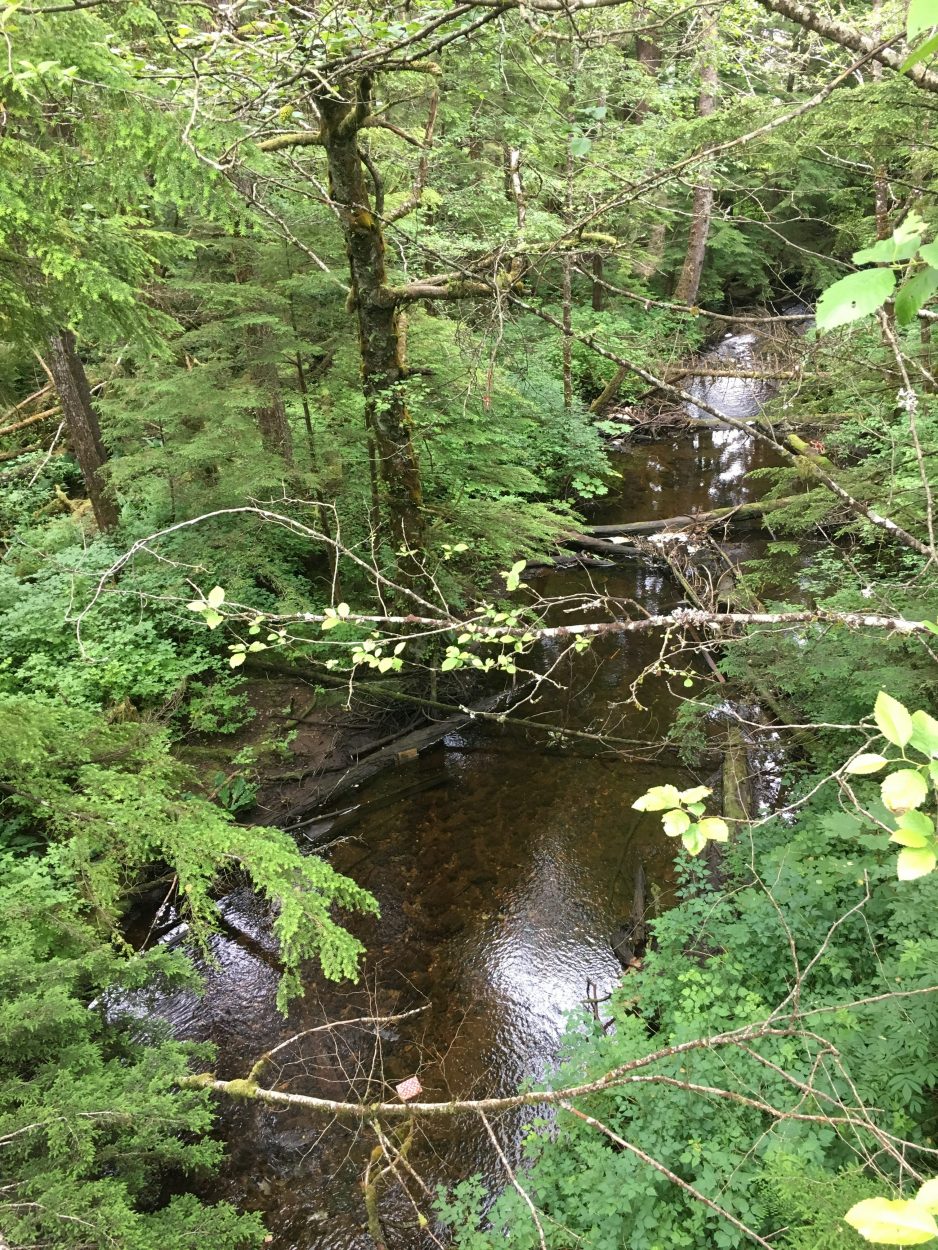 The ravine that runs parallel to Fairy Chasm Road, thought to be the site of the old Shoenbar Mine.

“So, if we were to try to locate the mine today, we wouldn’t look at the middle school,” I said.

“No,” she replied. “From what I’ve read, the middle school is not located anywhere near the mine. But there is a house built over mining area.”

Luckily, the USGS records data on this sort of thing, meaning that I was able to find the latitude and longitude coordinates of where they think the mine used to be.

55.35 degrees latitude and -131.64 degrees longitude led me to the southeast corner of Fairy Chasm Road and North Yorktown Drive. To me, it just looked like a ravine, set into the ground quite steeply and surrounded by trees and brush. I’m no mine expert, but all traces of Col. Shoenbar’s failed gold hunt seemed to have disappeared with time.

The USGS report on Schoenbar Prospect said the coordinates are accurate to within about a half-mile. So if you live in Bear Valley near Fairy Chasm and Yorktown, take a look at the land around your house. You might find you’re standing on a little piece of Ketchikan’s rich history.

Thanks for joining me for this installment of Ketchikan Uncovered. You can find past episodes on our website at KRBD.org.

Do you have questions about Ketchikan? Something you’ve always wondered but never really had the chance to find out? Let Emma know by submitting your queries to KRBD’s Facebook page or by calling KRBD at 225-9655.