Green sponge discovered in Southeast could treat some cancers 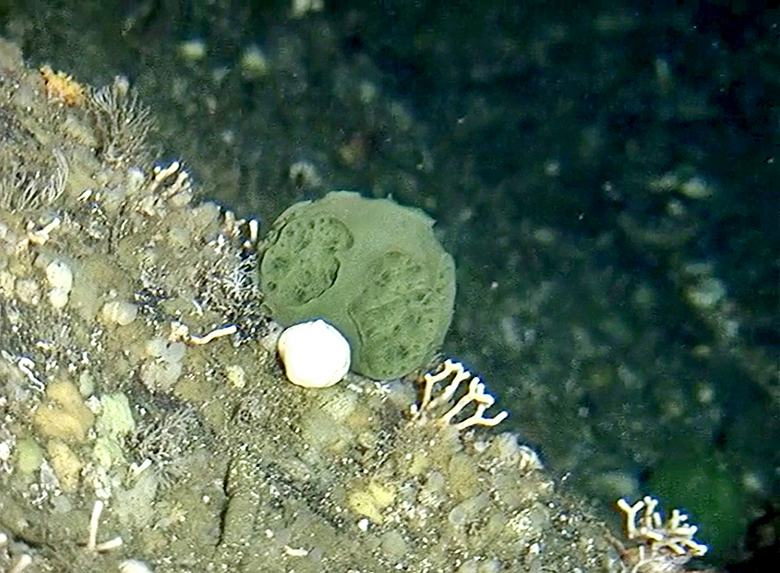 A green sponge found in the waters near Sitka could hold the key to curing pancreatic and ovarian cancer. (NOAA Fisheries photo)

A green sponge discovered in 2005 in Southeast Alaska waters has unique properties that could be used to treat certain types of cancer.

There was a news conference Wednesday morning, hosted by the National Oceanic and Atmospheric Administration.

Bob Stone is a Juneau-based coral and sponge biologist with NOAA Fisheries, but he works all over Alaska’s oceans. He was in a submersible, conducting habitat surveys off Baranof Island south of Sitka when he saw it.

“The second I saw it, I thought I should collect it,” he said. “I didn’t know what it was, (and) I like to collect anything I’m not familiar with.”

It was a green sponge — unusual for the region, where sponges are more of a brownish color. Stone said it looked like some sponges he had been collecting in the Aleutians for Mark Hamann, a cancer researcher for the Medical University of South Carolina.

Those Aleutian sponges contain potentially useful biomedical compounds, and Stone said he suspected this one might, too.

“And as it turns out, this was an undescribed species of sponge, but in the same genus as the ones from the Aleutian Islands,” Stone said.

Sponges don’t move, so to survive, they produce special compounds that help ward off predators. And, according

to NOAA, some of those compounds can be developed for human medical treatments.

Another cancer researcher, Fred Valeriote of the Detroit-based Henry Ford Cancer Institute said he investigates natural products for potential treatments, and has collaborated with Hamann in the past.

Valeriote said Hamann’s lab studied the chemical diversity of that green sponge, and then sent an extract to the Detroit lab for them to take a look.

“We did that, and we found that this extract and eventually the pure compound that Mark discovered from the extract, had selective activity in our tissue-culture system for both pancreatic cancer and ovarian cancer,” he said.

That means the extract appears to target and kill tumor cells for those types of cancer, without also hurting normal cells. This is huge because those slow-growing cancers don’t typically respond to conventional treatments, such as chemotherapy.

Valeriote said he has looked at thousands of sponges, and found only one other that contains a molecule with similar effects.

The next step is to obtain more of the green sponge’s special cancer-killing molecule. Collecting more sponges is one option, but challenging because of their limited habitat. The sponge’s known range is about 1,000 miles, from Southeast Alaska toward the waters off Washington State.

Here’s Hamann: “Not only is the sponge relatively rare, then it turns out that the molecule is actually in very small quantities in the sponge, and at times perhaps not even in detectable quantities.”

So, Hamann is working on synthesizing the molecule in the lab.

Hamann said this discovery is exciting. He’s been doing this kind of research for more than two decades.

“For us, we’ve been looking at sponges, plants, marine invertebrates, and bacteria,” he said. “This is certainly, for us, the best and most exciting-looking candidate for the control of pancreatic cancer that we’ve come across in that 20-year period.”

The unique molecule likely developed in the sponge in response to its habitat. Doug DeMaster is the science director for NOAA Fisheries. He said the sponge is found in patches from depths of 230 to 720 feet.

“It’s pretty remarkable that while the ocean covers 70 percent of this planet, and nearly half the U.S. population lives within 12 miles of the ocean, less than 5 percent of the ocean has been explored,” he said during the news conference. “The discovery of this green sponge shows the promise of the untapped potential of the ocean, (and) the possibility that a life-saving medical discovery is within our reach.”

But not for at least a dozen years, if at all. The development process takes time. So, although it’s looking good, it’ll be a while before we know for sure whether a relatively rare green sponge from Alaska will help save human lives.

There’s a NOAA video of Stone collecting a green sponge in waters near Sitka attached to a news release on the topic. You can find it through this link: https://www.afsc.noaa.gov/News/Green_Sponge.htm