Another mine opens close to the Alaska border 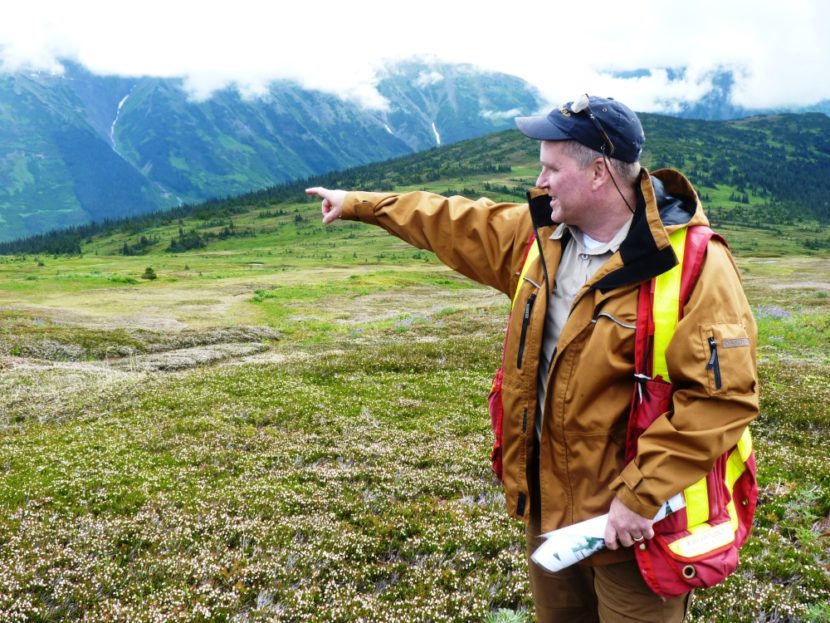 Seabridge Gold’s Brent Murphy points to a valley to be dammed to hold tailings from the KSM mine during a 2014 tour. The tailings dam was granted a key federal permit needed for development this summer. (Photo by Ed Schoenfeld/CoastAlaska News)

A new gold mine has gone into production near British Columbia’s border with Southeast Alaska. It’s one of several prospects under exploration near creeks or rivers that flow into the region. 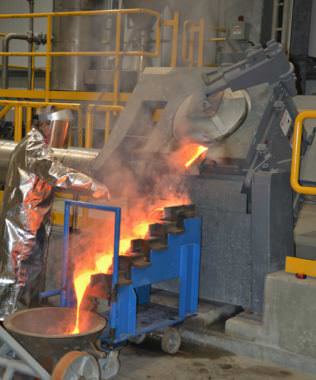 The Brucejack Mine pours its first gold bar in June of 2017. The mine is about 25 miles from the Alaska border. (Photo courtesy Pretivm Resources press release)

The Brucejack Mine had what’s called its “first pour” this summer. That’s when refined ore is melted down to make a project’s first bar of gold.

The high-altitude mine is about 25 miles from the Alaska border and around 80 miles east of Wrangell. It’s within the watershed of the Unuk River, which drains into the ocean northeast of Ketchikan.

Officials at Vancouver-based mine owner Pretivm Resources did not return calls by this report’s deadline.

But in an earlier interview, vice president Michelle Romero said the company is building on a previous owner’s work.

“There was existing underground excavation done and we had used that access to get to the heart of the project, which is the Valley of the Kings,” she said.

A company press release said its main ore body has proven reserves of 1.6 million ounces, worth around $2 billion in U.S. currency. It projects total reserves of four times that much gold, plus a significant silver deposit.

Brucejack is far less controversial than some other British Columbia mining projects across the border from Southeast Alaska.

Heather Hardcastle is a fisheries-business owner and campaign director for the environmental group Salmon Beyond Borders.

“It is a lot smaller than the other mines in the transboundary region and it is an underground mine. So as far as the disposal of tailings go, we certainly feel better about their plans to put the tailings and the waste back underground,” she said.

Tailings are ground-up rock, often containing hazardous minerals, that are leftover from processing ore. Mine critics say the common practice of mixing them with water and storing them behind dams threatens downstream fisheries.

Hardcastle said her main concern is that it’s part of a larger effort to develop more than a half-dozen projects that would use tailings dams. 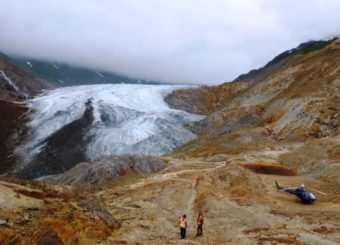 Oxidized rock colors a valley where one of Seabridge Gold’s KSM Project’s open pit mines will be dug if the project proceeds. (Photo by Ed Schoenfeld/CoastAlaska News)

The largest of those is Kerr-Sulphurets-Mitchell, which is next to Brucejack.

“The permit that we got was essentially an amendment to the federal law that allows us to go in and deposit essentially waste material into streams that are frequented by fish,” he said.

Murphy said the permit requires the company to post an appropriate bond and create twice as much fish habitat as it destroys.

“We have a crew of about 25 people in there, the camp has been open since early May and we’re also continuing with our ongoing environmental monitoring and it’s actually our 10th year of collection of baseline data,” he said.

KSM will store its tailings in a valley that’s part of the watershed of the Nass River, which enters an ocean inlet about 20 miles south of the Alaska border.

Salmon Without Borders’ Hardcastle, who fishes out of Juneau, said that’s close enough to pose a threat.

The KSM project is supported by the Nisga’a Nation, the tribal government for the Nass River Valley. Both signed an agreement promising environmental protections, jobs and financial support.

Seabridge Gold continues to seek investors for the multi-billion-dollar project. 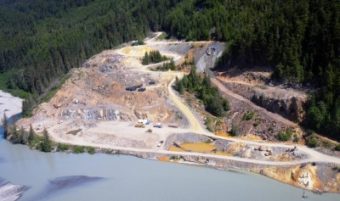 The Tulsequah Chief Mine is on the banks of its namesake river, which flows into the Taku River , which enters an ocean inlet about 25 miles northeast of Juneau. (Photo by Joe Hitselberger/ADF&G)

The company is also exploring ore deposits in a nearby area. The Iskut Project is about 20 miles northwest of the KSM and approximately 10 miles from the Alaska border.

Seabridge acquired the area about a year ago. Murphy said the company has been drilling to find out more about what’s there. The prospect includes a mine that closed in 1990.

“We know there’s gold mineralization at Johnny Mountain. We started there last year, trying to understand the geology, and we’re moving a little bit further afield this year,” he said.

Part of the purchase is a multi-year cleanup plan, including removal of asbestos tiles, mercury lamps and a fuel-tank farm.

One transboundary mine that’s going nowhere is the Tulsequah Chief, on a Taku River tributary about 40 miles northeast of Juneau. It closed more than a half-century ago and two attempts to reopen it failed.

The company holding its assets filed documents earlier this summer suggesting it had found a new investor. But mine critic Chris Zimmer, of the group Rivers without Borders, said officials have told him the company is no longer interested.

“Now we’re kind of back here in a little bit of limbo. There’s no company up there, the mine continues to leak acid mine drainage and now we’re kind of unsure what the B.C. government is going to do next,” he said.

The province’s previous top mine official committed to cleaning up pollution from the Tulsequah Chief after a visit two years ago. But a new mines minister just took over and isn’t ready to discuss the situation.