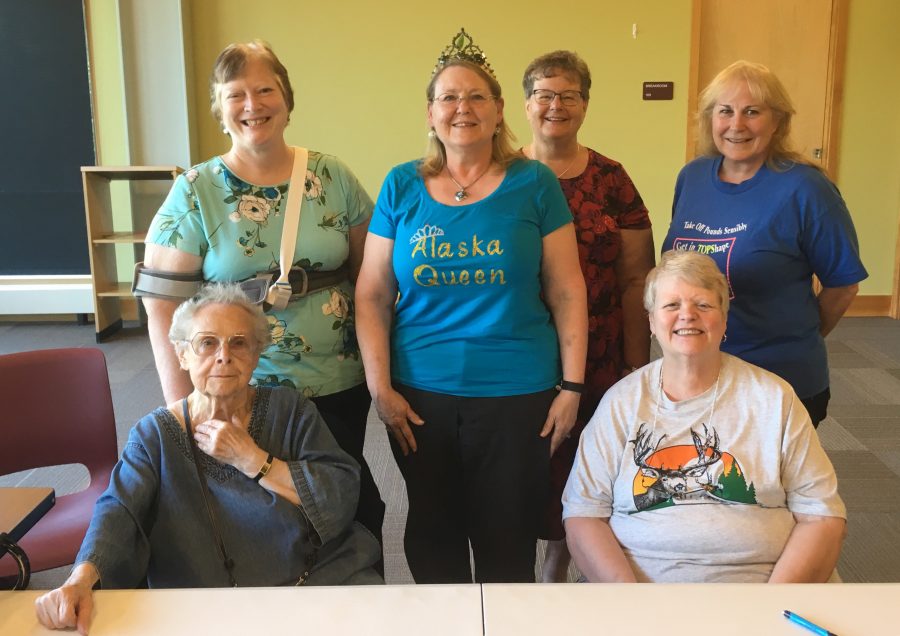 The reigning Take Off Pounds Sensibly queen for Alaska was in Ketchikan recently to talk to the local chapter and help inspire its members to continue making healthy choices.

Take Off Pounds Sensibly is a national nonprofit organization that, as the name suggests, focuses on healthy weight loss. There are about 15 chapters in Alaska, including a small group in Ketchikan.

Each year, members compete for the role of state king and queen. The winner is whoever has reached their goal, and lost the most weight from the start of their journey – no matter how long it took to achieve that goal.

This year’s Alaska queen is Sharon Headley of Anchorage. Wearing a silver, jade and gold-nugget crown, she shared her weight-loss story while waiting for Ketchikan chapter members to arrive for a weekly meeting at the public library.

Headley lost 67 pounds to reach her goal. And it wasn’t a fast process.

Headley said she joined TOPS many years ago, but then quit thinking she could lose weight on her own. That didn’t work out, and she ended up gaining quite a bit.

So, she rejoined TOPS and said she was motivated to succeed.

“I just thought I was going to lose, lose, lose, which I didn’t,” she said. “Because we tend to be yo-yo people. Up and down, up and down. We’ve all lost billions of pounds, they just all found us again.” 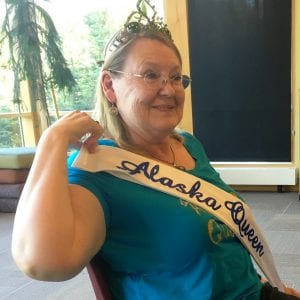 In 2009, though, Headley said she decided that, no matter what, from December to December of each year she would record some kind of loss. Then she picked a goal weight. She achieved that goal, and ended up as the state queen for Alaska.

As state queen, Headley represented Alaska at the international TOPS gathering, which was in Salt Lake City this year. The top TOPS royalty were crowned there, and this year’s international queen lost nearly 180 pounds. The king lost 140.

Headley said TOPS is not just about weight loss; it’s about support.

“We really cheer each other on,” she said. “A lot of people said when I was still a dumpling, ‘Oh, you go to TOPS. How’s that working for you?’ Well, I’m not 300 pounds. Sometimes if you just can hold it. It makes you accountable every week. You have to look at it and deal with it. We’re trying to get healthy, and we advocate in TOPS healthy weight loss.”

Headley stresses that weight loss is not easy or quick. But, she said, it’s never too late for anyone to start. She said one woman at the international gathering had reached her goal at the age of 96.

TOPS meetings start with a weigh-in. Peggy Meyers was in charge of the scale in the Ketchikan library activity room, and said she joined TOPS in 2009 in Washington State, then transferred to the Ketchikan chapter when she moved here.

Meyers said she enjoys the friendship of the group.

“Yeah we have our meeting, but we’ve also started sometimes meeting outside of Tuesday,” she said. “Not for

weighing in, but just encouraging each other in life. Not just in our attempts to lose weight.”

To that end, Headley brought a list of her TOPS tools – tips and tricks that helped her stay on track and lose weight. They include weighing herself regularly, writing down what she eats, making sure she drinks plenty of water, and eating a little dark chocolate every day.

“Dark chocolate is part of the tools that I use. This is how I finally got to where I got,” she said.

Headley shared that list during her short presentation to the local group, along with other tips. For example: A big carrot.

“This carrot can be eaten mindlessly in front of any TV, movie or wherever,” she said.

Headley said it won’t work to establish big, unattainable goals. Instead, make a small goal, small changes, then stick to them. When you’ve completed that goal, move on to the next. It all eventually adds up to one big achievement.

The TOPS group in Ketchikan meets each Tuesday at 5 p.m. at the Ketchikan Public Library.