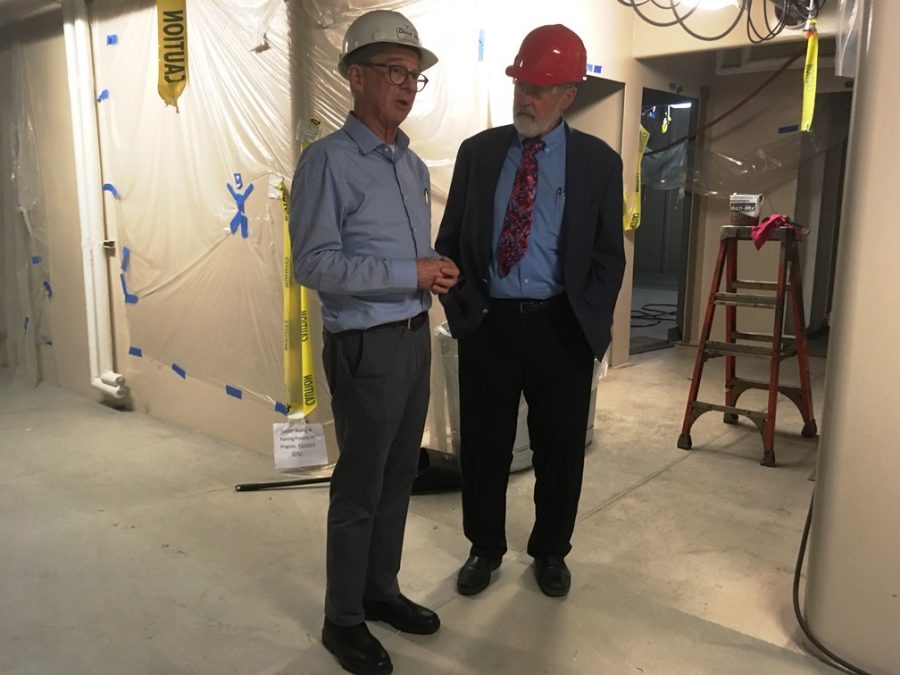 The Tazlina is the first of two new Alaska Class ferries that the Ketchikan Vigor Alaska shipyard is building for the state. Its two halves are complete and welded together, and shipyard workers are busy getting interior spaces done.

“I’d like to have those come up who started the day off with a hard hat , not just those that put them on in the last half hour like so many of us.”

In the cavernous main construction hall of the Ketchikan shipyard, Gov. Bill Walker prepares to sign a bill officially naming the Alaska-class ferry Tazlina, and its future sister ship the Hubbard.

We’re all standing on the Tazlina’s car deck: Local media, politicians, shipyard employees and members of the state Marine Transportation Advisory Board – in town for a special MTAB meeting.

Soon after the signing, Director of Shipyard Development Doug Ward takes a small group into the unfinished ferry for a tour. 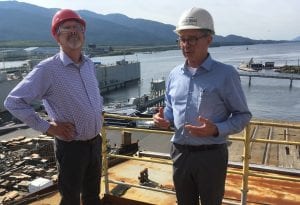 “The last time I took anyone on a tour, I got lost. We’ll see how I do today,” he said.

We soon get back on track, as we duck through plastic sheeting, skirt around equipment and peer into not-quite finished rooms. If the smell of fresh paint is any indication, the ferry is getting to the final stages.

Vigor’s Ketchikan shipyard received the $100-million state contract to build two Alaska Class ferries in fall of 2014. Both are due for delivery in fall of 2018.

Ferry officials have said the Hubbard won’t take as long to construct, because all the designs, templates and kinks in the plans were worked out with the Tazlina.

MTAB member Greg Wakefield asks Ward what makes the Ketchikan shipyard competitive with those in the Lower 48.

“That’s a great question,” Ward said. And we’ve got a great answer.”

Ward said the state-owned facility’s amenities are a huge asset, but he credits the people – the employees – who he said are empowered to innovate.

Ward said they have a young workforce, with some seasoned professionals to mentor them, and an apprenticeship program to continue building skills.

“We think that we’re already competitive with certainly other shipyards in the Pacific Northwest.

And when I say competitive, that means not only for price and schedule, but for quality as well. We’re already there. We can compete regionally,” he said. “Our next hat trick is to continue developing the skills and abilities in that workforce to get globally competitive, so we can win those contracts that we want, that fit our capabilities.”

Ward said Vigor intends to prove itself to the state with the Tazlina and Hubbard, and win more ferry construction contracts. Wakefield said that he hopes that will be the case.

And during the signing ceremony earlier, state Sen. Bert Stedman echoed that hope.

“I really gotta take my hat off to the quality that the Vigor shipyard crew put into these new ships. And this is just the beginning.  This isn’t the beginning of the end, this is the beginning of the whole project of several new ships over the next few decades that need to be built,” he said. “And I’d like to see all of them built right here in this yard.”

The Alaska Marine Highway System’s fleet is aging with many ships due or overdue for replacement.

First things first, though. And the Tazlina is first. Yohl Howe is the general manager of the Ketchikan shipyard, and he was leading a separate tour of the ferry. 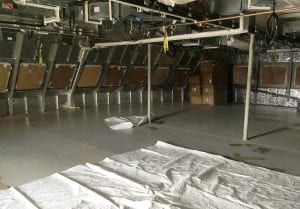 The observation lounge of the Alaska Class ferry Tazlina is about 80 percent complete. (KRBD Photo by Leila Kheiry)

We combined forces briefly while Howe talked about finishing out different spaces on the ship. He said that’s the most exciting and satisfying part of the process.

“So our closeouts go in order of which spaces we’re going to outfit first with joinering. We’re starting right below this deck in the quiet room and the library. Also the children’s play area,” he said. “We’ll get those joinered, then we’ll come up to the observation lounge, close that out, then we’ll keep following the outfitting as it goes through. The paint is probably the prettiest part, so we’re putting a big emphasis on paint this week and next.”

Closing out each section as they finish is one of those innovations Ward mentioned. Otherwise, he said, they might paint a section, then come through to work on something else, mess up the paint and have to do it again.

“It’s a whole collection of little innovations, little improvements like that in the ship building process that, put all together, is going to give you that competitive advantage,” Ward said.

An advantage that could lead to more jobs in the future.