Yes, it’s rained a lot in Ketchikan this month 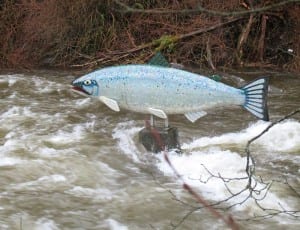 The Yeltatzie Salmon, a sculpture by Terry Pyles, is seen in Ketchikan Creek. (KRBD file photo)

Alaska can be really rainy in August. But Ketchikan is going above and beyond in the wet-weather category. The city had more than seven inches of rain in a 24 hour period earlier this week.

Brian Brettschneider is a climatologist who lives in Anchorage. He spoke with Annie Feidt, from Alaska’s Energy Desk, as part of a regular look at climate change in the state.

Brettschneider says Ketchikan is already the rainiest city in the country, and August is adding up to be a very wet month. Here’s a partial transcript of their conversation:

Brian: “For the first 22 days of August, Ketchikan has had about 16.5 inches of rain. And normally they only have about 6.25 inches, so in terms of the raw precipitation total, they’re leading the way in the state. But also in the percent of normal- so that’s more than about 2.5 times what they would expect. And remember August is the wettest month of the year for much of mainland Alaska, but down in Southeast, August really isn’t one of the top three or four wettest months. That’s September or October, so 16 inches of rain in a month for Ketchikan, not very uncommon, but in August it’s really uncommon.”

Annie: “So they’re not even in their wettest month and they’re getting crazy amounts of rain.”

Brian: “Yeah, they don’t really peak until October, so once they get into October, 16 or 17 inches of rain is not a big deal. But in August, it’s something they’re not used to dealing with.”

Annie: “And what about the rest of the state?”

Annie: “And why is it so wet this time of year in Alaska?”

Brian: “A large percentage of our annual precipitation falls in August, September, and October. So those 90 days for many places, they receive more than half their annual precipitation, even as much as 60 percent in parts of the Interior in those three months. That’s because the hemispheric patterns start to shift where you get cooling off of high latitudes, but it’s still warm in low latitudes. So you end up with the long wave pattern starting to shift and the early onset of the North Pacific and Aleutian low pressure system. As that starts to develop, you get southwesterly flow coming around the eastern side of that and that sends lots of moisture and disturbances into the state and we get lots of rain out of that.”