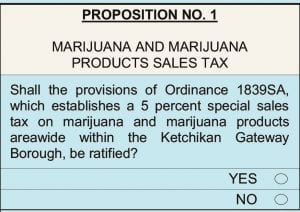 Voters in the Ketchikan Gateway Borough will decide whether to ratify a 5-percent marijuana retail tax. (Detail from a sample ballot)

Voters within the City of Ketchikan will decide two ballot questions in October; and voters outside of city limits will vote on one.

That’s because there’s a boroughwide ballot issue, and a city-only question.

The boroughwide issue, which everyone can vote on, is a 5-percent retail marijuana tax. The Ketchikan Gateway Borough Assembly already approved it, but borough code requires voter ratification for any new sales taxes.

If voters approve the new tax, it will not apply within the City of Ketchikan. That’s because the city already has a 5-percent pot tax.

Assembly members who supported the tax say it helps balance taxes throughout the community. Those who opposed it say a single industry shouldn’t be targeted for special taxation.

Currently, there are two marijuana retail stores inside city limits, and one outside.

If approved, the tax would sunset after five years.

The city-only ballot question would prohibit transportation network companies such as Uber and Lyft from operating within the City of Ketchikan.

The Ketchikan City Council voted unanimously this month to approve the ban, but it must be ratified by voters before it can take effect. Council members have concerns about successfully collecting sales taxes from the individual operators contracted by those companies.

The council also was unhappy with state legislation allowing the companies to set up shop. That statewide measure didn’t provide for any local controls, except for an outright ban.

Public comment opposing the council’s proposed ban cited the free market, and the benefits of competition.

The local election is October 3rd. Click the link below to see the sample combined ballot, which includes city and borough issues and candidates.