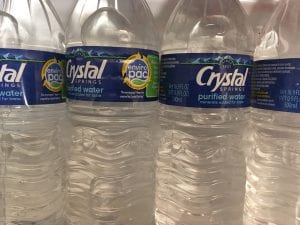 Individual water bottles would be taxed 5 cents each, according to a proposed ordinance in front of the Ketchikan Gateway Borough Assembly on Tuesday. (KRBD photo by Leila Kheiry)

The Ketchikan Gateway Borough Assembly on Tuesday will consider a new tax that would go toward helping local nonprofit agencies.

The proposed excise tax on beverage containers was sponsored by Assembly Members Judith McQuerry and Felix Wong. In their sponsor statement, they say a beverage container fee would not target any specific population, so it would be more fair than, for example, a tobacco or marijuana tax.

The proposal calls for a tax of 5 cents for each non-refillable beverage container. That includes individual plastic bottles of water, aluminum cans of pop, glass bottles of kombucha, cans of beer, etc. The proposal also calls for a $1 tax per gallon container of fountain drink concentrate.

The tax would not affect beverages in individual containers exceeding one gallon.

The proposal estimates such a tax could generate more than $450,000 a year, which would go toward grants for local agencies and to build up the borough’s depleted economic development fund.

A staff review of the proposal indicates it’s a feasible concept, but more research is needed.

Also on Tuesday’s agenda is introduction of an ordinance rescinding the senior sales tax exemption on alcohol, tobacco and marijuana retail products. Borough employees have estimated that could generate around $25,000 a year.

Tuesday’s assembly meeting was rescheduled from its usual Monday meeting day because of the Labor Day holiday. It starts at 5:30 p.m. in Borough Assembly chambers at the White Cliff building. Public comment will be heard at the start of the meeting.