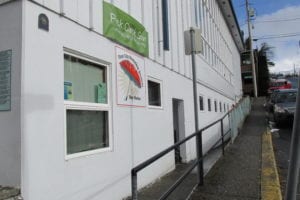 The entrance to the First City Homeless Services Day Shelter is seen this spring. The organization is working with the Salvation Army to open a separate night shelter. (KRBD file photo)

The Ketchikan City Council agreed Thursday to fund a seasonal warming center for homeless residents at a cost of $80,000.

The program is a partnership between First City Homeless Services and the Salvation Army. Those organizations worked together last winter, too, to provide a warming center at the Salvation Army building on Stedman Street. But, that facility doesn’t meet code requirements for people to sleep there, and Lt. Sam Fowler of the Salvation Army told the council that his group doesn’t have the funding to pay for it a second year.

The Rev. Evelyn Erbele of First City Homeless Services told the council that a safe place where people can sleep off inebriation following alcohol or drug use will save the city money in the long run. It will cut back on unnecessary work by police and emergency services personnel.

There was some concern from council members about the city fully funding the program. Agnes Moran is working with the group on setting up the warming center. She says they are applying for funding through the federal Department of Housing and Urban Development, and the Alaska Mental Health Trust; and they plan to apply for funding through PeaceHealth, which runs the local hospital.

But, Moran says, because of when the plan came together, it didn’t work out to get applications in for this year. They hope to open a warming center at the start of October, and run it through the end of March.

Most of the funding will go toward salaries. The rest is for rent and supplies. Erbele says they are negotiating to rent a downtown location.

The motion to fully fund the warming center this year passed unanimously.

Also Thursday, the council approved two loan applications to the state for new water and wastewater pipes on Schoenbar Road. The Council also agreed to meet in special session next Thursday (Sept. 14) to vote on a plan to dredge sediment from a washout on Carlanna Creek. The sediment is causing navigational issues in the Tongass Narrows.