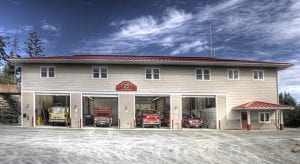 According to the Alaska State Troopers online dispatch, the accident was reported at about 10:45 p.m. The driver was a 24-year-old Ketchikan man, operating a 2010 Mazda southbound on the highway.

Troopers say that when the vehicle reached the end of the paved part of the road, the driver lost control, went off the roadway and hit a rock wall. South Tongass Volunteer Fire and EMS and the City of Ketchikan Fire Department responded to the scene.

The driver and three passengers all received minor to moderate injuries, according to the Troopers report. Two were taken to PeaceHealth Ketchikan Medical Center for treatment. They all reported wearing seatbelts.

Troopers say the vehicle was heavily damaged and towed from the scene.