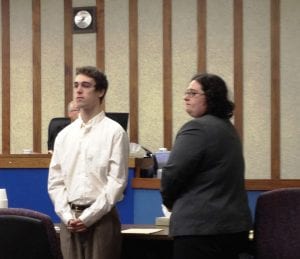 Devin Rossiter, then 19, is seen during his January, 2012, trial. The Alaska Court of Appeals has overturned Rossiter’s murder conviction. (KRBD file photo)

Citing improper arguments by the prosecution, the Alaska Court of Appeals on Friday overturned the murder conviction of a 25-year-old Ketchikan man who was found guilty about five-and-a-half years ago.

In January, 2012, at the age of 19, Devin Rossiter was convicted of second-degree murder for the March 2011 stabbing death of 45-year-old Nick Stachelrodt.

Rossiter never denied stabbing Stachelrodt. He claimed during his jury trial that he acted in self-defense after Stachelrodt confronted him at the Vallenar View Trailer Park.

On the evening of March 12, 2011, then-18-year-old Rossiter had been drinking with friends at a residence in the trailer park. He wanted a cigarette, and went door-to-door asking for one. One of the doors Rossiter knocked on belonged to John and Mary Stachelrodt, the victims’ parents.

John Stachelrodt told the teen “no,” and went back inside. Soon after, the prosecution said, Nick Stachelrodt arrived at the home and found the teen going through his parents’ car. According to court records, Stachelrodt grabbed Rossiter to talk to him and remove him from the vehicle, and that’s when Rossiter stabbed Stachelrodt.

According to KRBD’s 2012 coverage of the trial, defense attorney Sam McQuerry told the jury that Rossiter feared for his life, and believed he might be raped, killed or kidnapped. The defense argued that Rossiter should be convicted of manslaughter, rather than murder.

The prosecutor, James Scott, repeatedly told the jury in his closing statements that the only way the jury could find Rossiter not guilty of murder is if they believed Stachelrodt deserved to die. A PowerPoint presentation included slides that also made that claim.

The jury deliberated for two days before returning with a guilty verdict.

In its order reversing the conviction, the Alaska Court of Appeals cited the prosecution’s closing arguments and PowerPoint presentation. The opinion states that both “grossly mischaracterized the law of self-defense.”

According to the opinion, a claim of self-defense means a jury must decide whether a defendant used deadly force as a reasonable response to an actual threat, or the reasonable belief that they are threatened. Whether the victim “deserved to die” should not be part of that decision, according to the court opinion.

The judge in the case was Superior Court Judge Trevor Stephens. The opinion states that even without an objection from the defense, the judge should have intervened when the prosecutor made those statements.

The appeals court also states that the prosecutor improperly argued that Rossiter’s claim of self-defense was a ruse made up by the defense attorney.

The appeals court states that the cumulative effects of the prosecution’s improper arguments undermined the fairness of Rossiter’s trial.

John Skidmore, director of the state’s Department of Law Criminal Division, said Monday that his office is reviewing the case to determine whether to re-try it. He says it is likely that the case will go to trial again. If that does take place, Rossiter will be eligible for bail.

This report has been edited to include additional information.