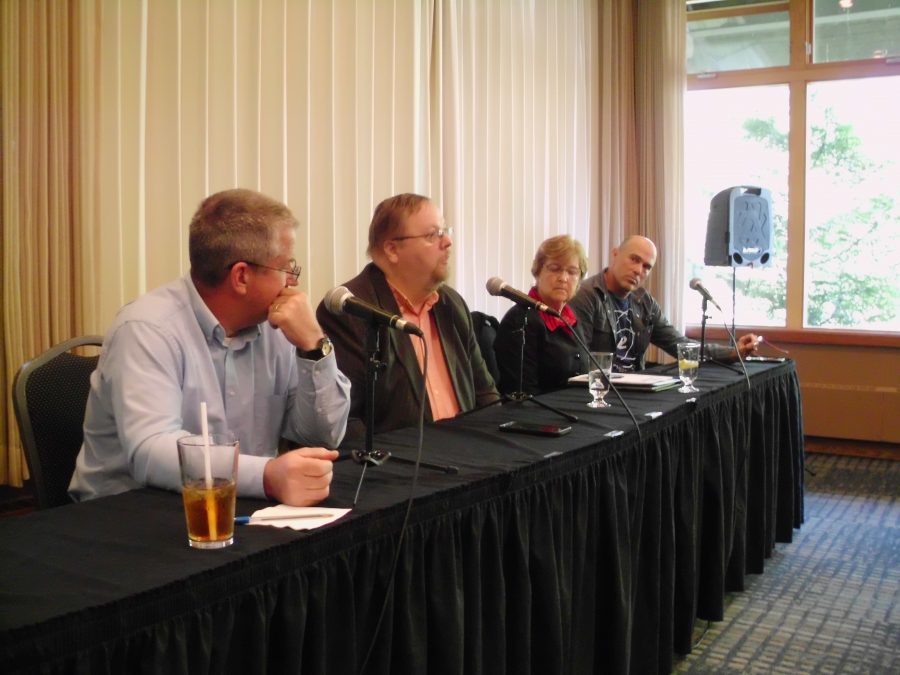 Four of the five candidates running for Ketchikan School Board attended Wednesday’s  chamber of commerce election forum.  KRBD’s Maria Dudzak attended and has this report.

Candidates were asked to tell something about themselves that people likely don’t know, and why that would make them a good choice. Timmerman says he was a high school drop-out and wants to help keep students from dropping out.

“Some people know me from professional things that I’ve done in life and would be shocked to know that I didn’t get that degree.”

Gubatayao says she served three years on the Tongass School of Arts and Sciences Academic Policy Committee, and learned a lot about school policy, staffing and budgeting, and made decisions at a council level.

“The skill set that I believe I bring, being a pastor, is I believe in communication and relationships. I think that’s something that a lot of people are not aware of that I can bring to the table.”

Brown says he’s a “recovering attorney,” having practiced law for about 20 years. He says he learned skills in finding common ground, often among people who don’t like each other.

Candidates were asked about student academic achievement and changes they might like to make, if any. Gubatayao says she feels there should be better understanding of how outside influences interfere with academic performance.

“The importance of that is understanding students have a life at home that may not be the most supportive for them, and it plays out sometimes in school.”

She says schools can be a safe place where students find support.

Blankenship says he’s concerned about students “falling through the cracks.” He says student achievement can be accomplished by forming relationships.

Brown says roughly 40 percent of Revilla and Kayhi graduates don’t go “south to college.” He says some don’t have the means, while others are not interested.

“With that percentage of kids graduating that are going to be otherwise looking for employment, I felt like we had an obligation to do better by them to prepare them for the workplace when they graduate. The vocational-technical training emphasis that’s been there for the last couple of years, we’ve been pushing that, the board’s been pushing that. And I think we’re making some measurable headway there.”

Timmerman says he’s concerned about students who drop out. He says he supports vocational-technical classes, but the district needs to keep up with technology.

Asked what the school district could do better to prepare students as citizens, Blankenship says all students learn at a different pace and having quality teachers is important.

“The quality educators that we have is probably one of the biggest things that we can do to make sure that our young people are prepared. (From) what I’ve seen, I would say that definitely is taking place in our school district for the most part.”

Brown says he would like to see more emphasis on community work service hours, exposing students to the people who make Ketchikan what it is.

“I don’t think I was any different as a teenager. You don’t really see the community as a whole. You see lots of different moving parts. The town happens. The reason it works is because there are a lot of people doing little things all along the way.”

“That’s going to happen at home. I know that’s a hard thing sometimes. Families can be tough. There’s fundraising the kids have to do for activities. I believe that activities themselves get kids more involved in the community. You’re out in the spotlight more. You have to maintain a certain demeanor to be on those teams. I think that the school district does a fairly good job. But really when it comes down to it, I think citizenship – that starts at home.”

Gubatayao feels community service is important. She says she also supports social and emotional learning. Gubatayao says she has known brilliant students who lacked social skills and struggled when they left school.

“…learning compassion, learning empathy, learning cooperation, developing those. I think we have an opportunity in the schools to provide students a chance to learn those skills and practice those skills. And I think that’s a path to citizenship.”

Noting that working on a board involves teamwork, when asked if there was one thing the candidate could change singlehandedly in the district, Blankenship says he would like property taxes lowered. Brown says he would like to see academic performance improve so that test scores aren’t just above average for Alaska, but comparable to the highest performing states. Timmerman says it may sound fanciful, but he would like to unlock communication barriers between everyone. Gubatayao says she would like the school district to be a trauma-informed district, supporting and understanding students’ emotional well-being.

Gubatayao, Timmerman and Glen Thompson are running for two three-year seats on the School Board. Blankenship and Brown are vying for a one-year term. Municipal elections are October 3rd.