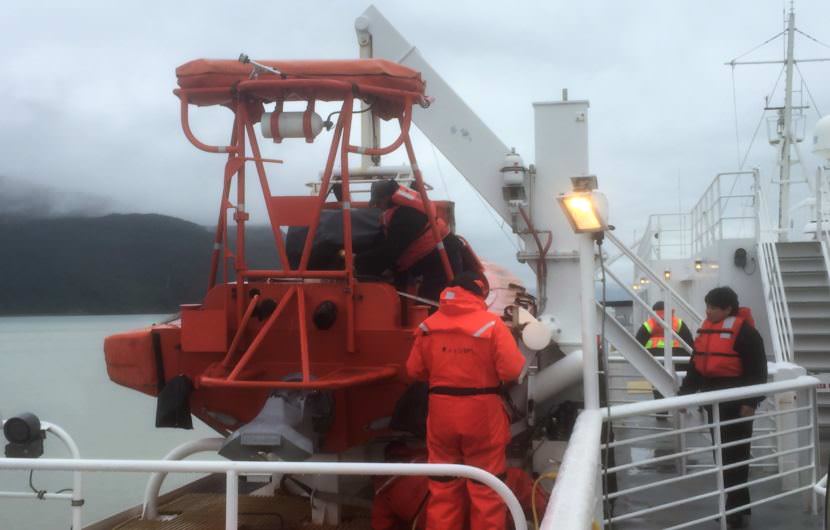 Crew members wrap up a safety drill on the deck of the ferry Malaspina during a sailing from Juneau to Haines Sept. 18, 2017. The ferry system faces changes to its fleet as part of a larger reform plan. (Ed Schoenfeld/CoastAlaska News)

A plan to reform the Alaska Marine Highway System calls for replacing some ferries with smaller, more efficient vessels. Backers want it to be run by an independent corporation and negotiate its own labor contracts.

Many Alaska Marine Highway ferries are showing signs of age. Fares are rising and sailings have become less frequent. Most importantly, funding is dropping, pointing to what could be dark times ahead.

“We can continue to admire the problem, and the resulting report, like has happened so many times in the past. Or, we can do something,” said Marc Luiken, commissioner of the state Department of Transportation, which includes the ferry system.

And the report he’s talking about? It’s a near-final draft of a plan to change how the marine highway is managed, and in some cases, operated.

“I strongly suggest crafting legislation necessary to move this effort forward and create a public corporation that will take over governance of the system,” he said at the Southeast Conference annual meeting Sept. 20 in Haines.

The new corporation would continue to receive state and federal funds. But backers say it would provide a buffer between the ferry system and shifting political priorities. 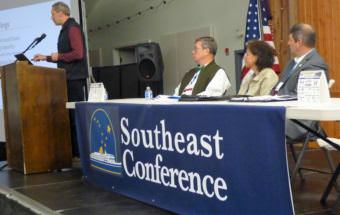 Jim Calvin of the McDowelll Group speaks as part of a panel on reforming the Alaska Marine Highway System Sept. 19, 2017, in Haines. (Photo by Ed Schoenfeld/CoastAlaska News)

“It’s not a complete divorce from state government,” said Susan Bell, a former state commerce commissioner who is with the McDowell Group, which contributed to the report.

The corporation would have its own staff, overseen by a seven-member board appointed by the governor. It’s modeled, in part, on the Alaska Railroad Corp.

Former Transportation Commissioner Mark Hickey was part of the effort to create that corporation in the mid-1980s.

“If I were in charge of the world, I would do a bill where I’m as far away from all the rest of state government as I possibly can be. Have your own lawyers, do your own labor negotiations. You can’t do that completely; you’re going to be tied. But generally, push to have freedom and autonomy,” he said.

Another major change is how and when the system would be funded.

Jim Calvin is senior economic analyst for the McDowell Group.

“The reason that you want this sort of advanced planning opportunity, the forward funding that can support this advance planning, is so people can plan accordingly. Particularly businesses that need long lead times to plan their business operations around the service that the marine highway can provide,” he said.

The state Legislature would have to agree for the plan to work. That’s been a difficult battle for the education budget, which has had much broader support. 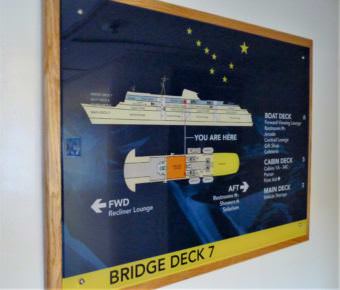 An onboard diagram illustrates what’s on the ferry Matanuska’s Bridge Deck on Sept. 20, 2017. (Photo by Ed Schoenfeld/CoastAlaska News)

“Forward funding at a year in advance, in this budgetary climate? I think it’s a bridge too far,” said Sen. Bert Stedman, a Sitka Republican.

He said the whole reform plan could leave the system open to deeper budget cuts.

He called forward funding “a novel idea.” But he pointed to a recently identified budget switch that could leave the ferries without operational funds this spring.

“I think you’re on the wrong track. I think the forward funding issue should be to try to get it funded through June of this year,” he said.

Rep. Sam Kito, a Juneau Democrat, had a different take. He said he’ll introduce legislation to forward fund the system.

Bell said the corporation would take over contract negotiations. That would allow it to change work rules, which could reduce staff and bring operational savings.

“We think that the system would benefit from a more direct relationship between marine highway governance and the unions. We believe not only the change to the corporate structure, but direct negotiations will enhance that,” she said.

The report said wages and benefits make up about 60 percent of the ferry system’s costs. It recommends moving toward smaller and simpler ships, with fewer staff.

“We’re not going to be helping the workforce,” said Capt. Joan Sizemore, a marine pilot working in Southeast Alaska and a former ferry employee.

“It seems to be that the impetus right now is to cut costs by removing people. And if you have fewer people working on those ferries, that’s fewer dollars spent in Alaska,” she said.

The ferry reform plan calls for the fleet to remain at nine ships, the current number of active vessels.

But two large ferries, the Columbia and the Kennicott, would be gone. The same could happen to the fast ferries.

Capt. John Reeves of the Elliott Bay Design Group said several ships could be phased out and replaced.

“Some of the shorter routes, you don’t necessarily need to have a crew on board 24/7 because the vessel is just making shorter runs. So we can have a different vessel (that) has a smaller crew, it’s cheaper to operate, but still provides the same service to the communities,” he said.

The ferry reform report also includes what it calls a minimal service model.

That would reduce the fleet from nine to seven ships and the annual weeks of service by about 20 percent.

The committee overseeing the ferry reform project is gathering public comments through Oct. 6.