Southeast economy down, with a few bright spots 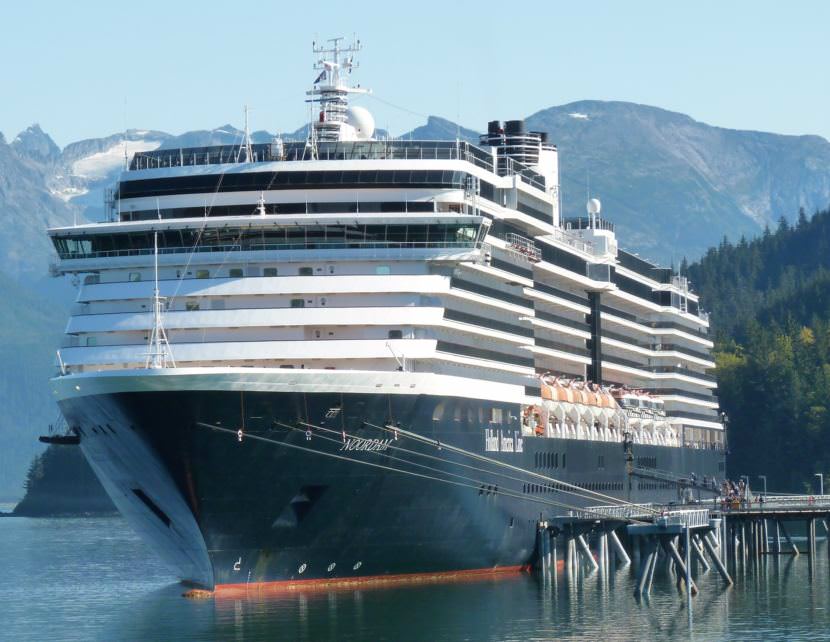 The cruise ship Noordam brought close to 2,000 passengers to Haines on Sept. 20, 2017. It and other ships carried more than 1 million passengers this summer, helping increase the region’s tourism economy. (Ed Schoenfeld/CoastAlaska News)

The loss of state jobs is hitting Southeast Alaska hard. And tourism has overtaken fishing as the region’s largest private industry. That’s the word from a new report released in September detailing the region’s economic booms and busts.

The region’s total wages and job numbers are down, according to Southeast Alaska by the Numbers, a report covering the 2016 calendar year.

Meilani Schijvens wrote the report for the Southeast Conference, an economic development organization. She presented her findings at its annual meeting in Haines.

The biggest hit is to government jobs.

She said about 30 percent of the region’s 45,000 jobs are in state and local government. Add to that more than a third of its $2.2 billion in wages. 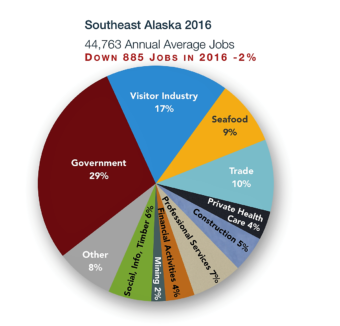 What jobs do Southeast residents have? This pie chart splits up the sectors for 2016. (Graphic courtesy Rain Coast Data)

“A lot of people say, ‘Well, people, you know, are retiring,’ or ‘They’ve left their job and it’s not being replaced.’ It doesn’t matter if the actual individual leaving the job isn’t impacted. It ends up being a huge hit to our economy,” she said.

Schijvens said Southeast lost 250 state jobs last year and three-quarters that many so far this year.

That’s a total of 750 lost jobs over three or so years, a nearly 15 percent drop.

Mining jobs, by the way, are up, but only slightly.

Southeast tourism continued to grow in 2016.

The number of jobs went up 5 percent, providing nearly a quarter of the region’s business earnings.

“Our visitor industry, in terms of wages, is now our most important private sector industry for the first time ever,” she said.

Schijvens said fisheries jobs dropped by more than 10 percent, and earnings went down by almost twice that amount. The fisheries business is cyclical, so one or two years may not predict a longer trend.

The report shows hits to businesses on land and sea.

“In 2016, shore-based seafood facilities processed 30 percent fewer pounds of seafood than in 2015. And Southeast Alaska state fisheries tax revenue fell by more than 50 percent. So these losses are also directly affecting out communities,” she said.

Schijvens said Southeast lost residents in 2016, as it did the previous year. Around 650 people moved away.

“Juneau really bore the brunt of those losses. So if you look at Juneau, they had their third largest population decline in the history of that community, because they’re really ground zero for state jobs and state wages,” she said.

The biggest population increases were in several small Prince of Wales Island cities, which ranged from 10 to 30 percent growth. Gustavus, Skagway, Tenakee, Klukwan and Wrangell also picked up new residents.

Schijvens made some future projections too.

She expects continued decline in government and construction jobs, tied to the lower price and quantity of oil. Local stores, those not targeting tourists, will also lose some ground, as will timber.

But it’s not all bad.

And how do the region’s industries view the future?

A survey included in the report shows about half of business owners and managers expect things to be the same. A third say it will be better. And the rest say it will be worse.