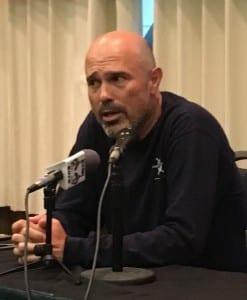 A candidate for Ketchikan School Board was arrested Friday afternoon and faces charges of misdemeanor assault and threatening a witness, a felony.

According to the complaint filed in court on Friday by Ketchikan Police Detective Ryan Pritz, the charges against 46-year-old David Timmerman stem from an incident that allegedly happened at about 7 p.m. Thursday.

The complaint states that a man in a motorized wheelchair told police Timmerman nearly struck him with his car when he pulled up close to the curb on Tongass Avenue near My Place Hotel. The man told police that Timmerman then started yelling at him and making threatening statements.

The man is a witness in a criminal case involving Timmerman’s mother-in-law, according to the complaint.

The complaint states that Timmerman admitted to police that he had driven up to the curb and confronted the man.

Timmerman had a court hearing Saturday morning. He was released on $2,500 bail. His attorney is Stephen Bradford.

Bradford said in a telephone interview Monday that Timmerman denies the allegations against him. Bradford said that his client did pull up alongside the man, but never got out of the vehicle.

“Oh, absolutely. The man was clear up on the sidewalk and Dave just pulled up alongside the curb,” he said.

Timmerman’s next scheduled hearing is 9 a.m. Friday in Ketchikan District Court. Bradford says his client will plead not guilty to the charges.

Timmerman is on the Oct. 3rd ballot for a Ketchikan School Board seat. He served previously on the school board but didn’t run for re-election last year. He ran instead for Ketchikan Gateway Borough Assembly, but was not elected.

Regarding how this incident might affect his client’s chances in the election, Bradford said “we’ll leave that to the voters.”

This report has been updated from the original to include statements from the defendant’s attorney.