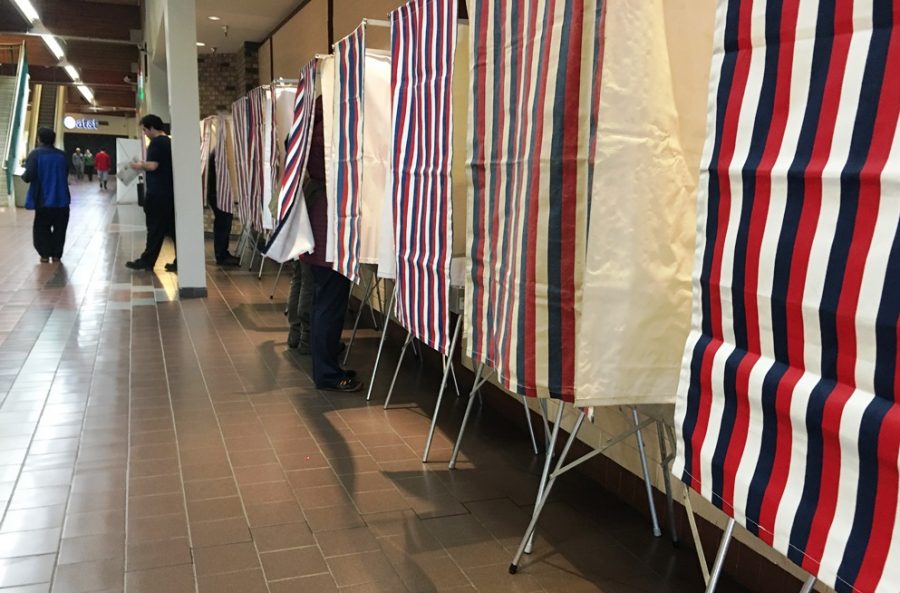 Voters fill out their ballots at City of Ketchikan Precinct No. 2. Voter turnout in the 2017 election was 21 percent. (KRBD photo by Leila Kheiry)

Around 20 percent of Ketchikan voters turned out on Tuesday. According to the unofficial results Tuesday night, they chose three new Ketchikan Gateway Borough Assembly members, and rejected a proposed city ban on Uber. 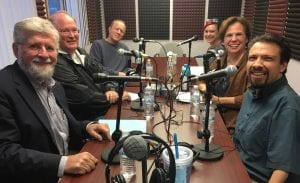 Pickrell served previously on the Ketchikan School Board, and ran previously for assembly. It took three tries, she said after the unofficial results were announced, but she finally made it.

Pickrell said she hopes to start planning before the borough’s budget crunch starts next spring.

“Not just for the budget purpose for this year, but for the coming years. Do some forward thinking and planning for the future,” she said.

Bailey also has prior experience as an elected official. He served on the assembly for two terms. Pierce, though, is brand-new to local politics. Shortly after the unofficial results were announced, she said she was excited, humbled and grateful for the opportunity.

“I’m just really looking forward to working through some of these issues and being a part of the community in a deeper dimension,” she said.

Boroughwide, voters also chose three Ketchikan School Board members. Diane Gubatayao and Glenn Brown, the two incumbents running for re-election, each won. The third winner was Glen Thompson, who just finished two consecutive terms on the assembly, and served previous terms on the assembly as well.

Thompson couldn’t run for re-election to the assembly because of term limits. In an interview after the unofficial results were announced, he said serving on the school board will be a completely different and exciting experience.

“As you know, I’m the budget hawk, so I’m going to be looking at the budget pretty hard,” he said. “Although they’ve done a really good job over the last three or four years at the school district level to tighten their belt. We’ve been preparing for the possibility of severe cuts from the state that have not materialized, but certainly could in the future.”

Also boroughwide, Ketchikan voters handily approved a 5-percent special sales tax on retail marijuana products. That tax won’t apply within the City of Ketchikan, because the city already has its own 5-percent pot tax.

On the city ballot, three incumbents running for re-election were unopposed, so they obviously won their seats. They are Dick Coose, Mark Flora and Dave Kiffer.

Also on the city ballot was a proposed ban on transportation network companies, such as Uber and Lyft. That proposed ban failed, with 594 voters rejecting it. Voters who wanted the ban totaled 276.

Voter turnout throughout Ketchikan was 21 percent, according to the unofficial results. That’s lower than last year’s 27 percent, but similar to 2015, which saw 22 percent of voters show up at the polls.

Here is a PDF of  Tuesday’s full unofficial election results, with all the available statistics: 2017 unofficial results

KRBD’s Maria Dudzak interviewed the winners in Tuesday’s election after the unofficial results were announced. We posted a recording of those interviews below. Diane Gubatayao was out of town and not available for an interview.