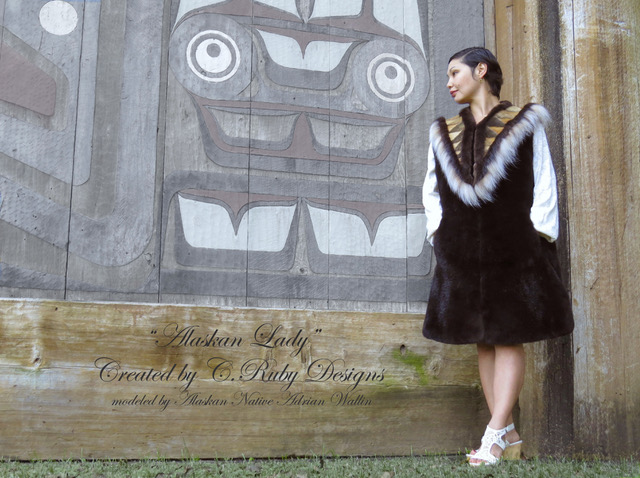 Christy Ruby’s award-winning fur, called Alaskan Lady, is seen in this image provided by Ruby. The model is Adrian Wallin.

Ketchikan artist Christy Ruby’s palette is mostly different shades of brown. But, her work has irresistible texture. Ruby is a furrier whose art has won awards at prestigious competitions, including a Best in Show during this summer’s Santa Fe Indian Market.

“The dress vest is called Alaskan Lady. It is made from sea otter, Pribilof fur seal, stellar sea lion, and beaver and lynx. Lynx from Kotzebue,” Ruby said, pointing to the fur on display in her workshop. “Every one of these furs are from Alaska, and I harvested the seal, the stellar sea lion and the otter.”

The Alaskan Lady is Christy Ruby’s most recent award-winning piece. It’s a long otter-fur vest with a geometric pieced collar. It had already won one ribbon at the annual Santa Fe Market in August, and Ruby hadn’t planned to enter it in the fashion competition.

She didn’t even know about a new category for contemporary work. Another designer she had just met, Leslie Deer, told her about it minutes before it started.

Ruby describes the conversation: “She said, ‘I have to go, I gotta get my girls ready.’ I go, ‘What are you getting ready for?’ She said, ‘A fashion show. You should enter your fur, your vest there.’ And I go, ‘I don’t have anybody to wear it.’ (She said) ‘Well, if it fits me, I’d be honored to wear it.’ (I said) ‘Really? A fashion designer is going to wear my garment for me? That’s unheard of nowadays. That’s wonderful! Let’s try it on.’ And it fit perfectly.”

And this designer modeling Ruby’s vest? She had her own items in the same category – the category that Ruby won. 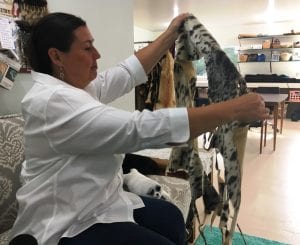 Sitting in a large, tidy well-lit workshop above her garage, Ruby says she came up with the Alaskan Lady design in part because she wanted to use a whole bunch of different furs.

Ruby explains the challenge of working with fur. It’s nothing like fabric, she says. It grows in all different directions, and different thicknesses, depending on what part of the animal it covered.

“I had to find three matching hides for that,” she said. “And they all had to look alike. Sea otters don’t all look alike. They’re very similar, but their tones are different, their color is different. This one has little white tips on it, which is very hard to match up. But there’s three separate hides in there. The trick is to make them look like they’re one.”

And there are pockets, I notice.

“Lined pockets,” she said, nodding. “Comfy pockets. You gotta have pockets. Nothing is nothing without pockets.”

Usually, a piece like the Lady would have a lining throughout to hide all the stitching. But, Ruby left it unlined. And she labeled the underside of each piece of fur, so whoever buys it can see the work that went into it. 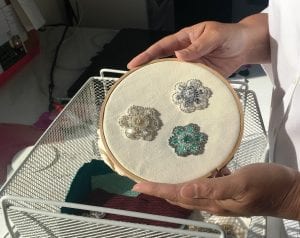 Christy Ruby also does her own beadwork to go with some of the furs she designs. These beaded accents will decorate hats that she’s working on. (KRBD photo by Leila Kheiry)

Ruby says she tries to make her art affordable, and accessible. One way she’s able to do that is by hunting her own otter and seal. And she doesn’t just use the fur. She eats seal, and what she can’t eat she shares.

Ruby has sent seal up north to village schools, so kids can part it out themselves. She says it’s healthier and less expensive than meat from the store, especially further north.

“Everybody always asks me that,” she said. “I’m going to start storing seal, dried jerky, (so I can say) ‘Here! Try it!’”

She says it tastes rich. And wild. Ruby says all food that she’s harvested herself has that essence.

“You ingest what you just worked hard for,” she said. “For some reason, you appreciate it so much more and it tastes so much better.”

Ruby stresses that her work is not about hunting. It’s about art and creativity, and celebrating her heritage. Hunting helps her create. And because she’s Alaska Native, she can hunt animals that most furriers aren’t allowed to touch. Like otter.

“It’s amazing fur,” she said. “Because it’s all flat. It’s all one level. Here’s one right here. This is a whole sea otter.”

It’s a big piece of fur.

“They’re huge,” she said. “This is probably a 75-100 pound animal. Yeah, he actually shrunk up in tanning. They’re a lot wider than this.”

Ruby is Tlingit from Klukwan, and says working with and wearing fur takes her back to her ancestral roots. She’s hunted since she was very young; and her grandfather was a carver, so art is another important part of her history. She became a graphic artist when she was a teenager, and worked in Anchorage for a long time. But, “every time I came back to Ketchikan — because I came here to go hunting one time – every time I came back here I felt better than I did in Anchorage.”

So she packed up and moved here. She hunted, sold hides, lived in a tiny rented cabin, and taught herself to sew fur. 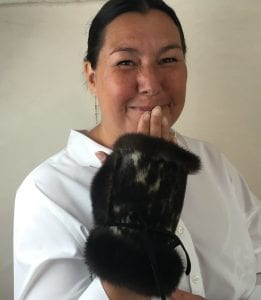 Christy Ruby models one of her most popular designs: fingerless gloves. (KRBD photo by Leila Kheiry)

Ruby still has the first piece she ever made. The purse never sold, so now it’s hanging from her “lifeboard” – a bulletin board in her workshop covered with ribbons she’s won, and images cut from magazines. On it are all the things she wanted to accomplish.

Ruby has accomplished some of those already. Mostly on her own. Sometimes with help from people who just happened into her life. She mentioned a good friend who she met by chance because of an unusual hat size.

“He had a big head,” she said. “I needed someone to try on my hat. He volunteered. Since then, he’s been in my life.”

Christy Ruby’s newest piece is called “Taboo Kusax`an (love) Birds.” Here’s the story that goes with this sea otter capelet: “For as far back as we can remember, Alaskan Native Tlingit Indians have descended from either Eagle or Raven clans. My grandmother, Charmain, and her best friend, Marianne, were both from the Eagle Clan. When my grandmother was hundreds of miles away, Marianne taught me about making moccasins, smoking fish, and mixing up soapberry cream. She also loved telling funny stories about her and my grandmother growing up together. When they were young, they both had a crazy crush on a “Raven” clan hottie. They argued a lot about who was going to marry him. Finally my grandmother gave in and said you can have this Raven. Marianne and the Raven dated and her eyes twinkled with love. She decided to make a blanket for him to wear to show off their love. What better design then the Kusax’an (love) birds? That design has always depicted the love of an Eagle and Raven as they peer into each other’s eyes. When she was just about finished, she found out he had cheated on her. She decided to finish the Eagle and Raven with heads looking away in disgust. She gave the finished blanket to him and he wore it not knowing the design was a disgrace. Two weeks later, the Raven came back and threw the blanket in her face. She laughed as hard then, as she did now telling me the story.” (Image and story courtesy Christy Ruby)