“My World” by Ricardo Burquez at the Ketchikan International Airport.

A new piece of public art was dedicated Tuesday at Ketchikan’s airport.

As people gathered in the Ketchikan International Airport’s baggage claim area awaiting the start of the dedication, Ketchikan musician Dave Rubin provided entertainment. All were there to celebrate the work of artist Richardo Bύrquez. 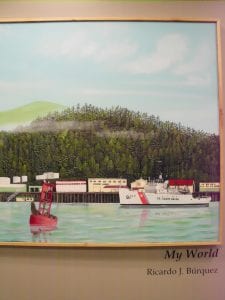 One of the panels from Ricardo Burquez’s “My World.”

Kathleen Light is executive director of the Ketchikan Area Arts and Humanities Council. She thanked those who made the event possible and congratulated Bύrquez. She says the art piece will play a significant role in the community.

Before presenting Bύrquez’s piece, Borough Mayor David Landis spoke about some of the art previously installed at the airport. One is a set of panels carved in 1973 and 1975 by Ketchikan artist Nathan Jackson. Landis says this was Jackson’s first commissioned public art piece.

“When we came over on the airport ferry I was talking to Mr. Ricardo Bύrquez who, of course, painted this art. And he said that this was his first commissioned piece to be publicly owned as well. So he’s following along in Nathan’s capable footsteps.”

Landis then spoke about Bύrquez’s piece, entitled “My World.” The set of five panels was painted in October 2016 as part of an exhibit at the Arts Council’s Main Street Gallery. Bύrquez began with blank canvases, and over the course of the month painted a panoramic of Ketchikan’s waterfront.

“Mr. Bύrquez spent every last minute of the month working on this at the location of the Main Street Gallery. Visitors came to watch as he painted and to ask questions. Mr. Burquez’s decision to paint the waterfront of Ketchikan came out of his love for the people and the environment of Ketchikan.

Bύrquez was born in Tijuana, Mexico, and came to Alaska in 1998 to fish. He worked in the fishing industry in Kodiak and Ketchikan, and, after sustaining a back injury, decided to retire in Ketchikan and make the First City his home. Landis says Bύrquez painted and created sculptures his entire life, but it wasn’t until after his injury that he decided to focus on painting.

“Mr. Bύrquez’s work can be seen throughout Ketchikan in private businesses and in homes. However, as I mentioned before, “My World” is Mr. Burquez’s first work to be owned by a public entity.

Landis says the painting was added to the borough’s art collection in July of this year.

Bύrquez said he did not prepare anything to say. He thanked those in attendance and those who wanted to attend but were unable to. Bύrquez acknowledged Arts Council staff, the city and borough, and Ketchikan artist Ray Troll.

“I have to mention my padrino, Ray Troll, who forced me to sign up for an exhibition. This is something that I’m going to remember with great, great joy.”

A padrino is one’s godfather or patron.

In closing, Bύrquez asked people to think of those affected by recent disasters, including those in his home country of Mexico, that was devastated by earthquakes.

“Because I have followers from my country. Right now you know (about) all the natural disasters (there) and in our brother countries too. I ask for everybody to think a little for them.”

Travelers to and from the Ketchikan International Airport can view “My World” in the baggage claim area, along with other art pieces throughout the building.