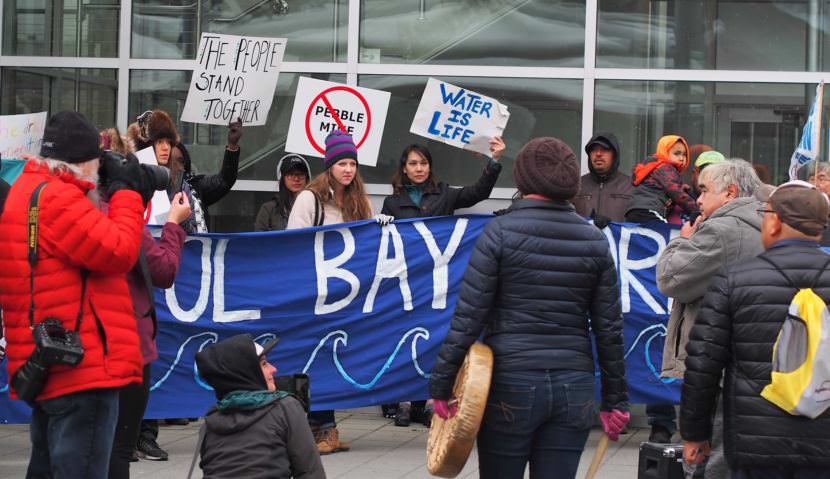 Groups rally against mine and other development during the 2017 Alaska Federation of Natives convention in Anchorage. Southeast and Bristol Bay tribal officials signed an agreement during the convention to combine fisheries-protection efforts. (Photo by Zach Hughes/Alaska Public Media)

Tribal groups from opposite ends of the state have formed an alliance to fight mines they say threaten traditional fisheries.

Organizations representing about 30 Southeast Alaska and Bristol Bay tribal governments signed a memorandum of agreement Oct. 18 during the Alaska Federation of Natives convention in Anchorage. 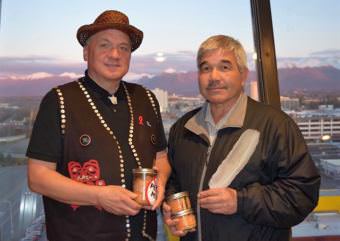 “To combine with several tribes from the other part of the state should send a powerful message to everyone and especially the federal government that we want the federal government to uphold its fiduciary trust responsibility and its government-to-government relationship with its federally recognized tribes,” said Frederick Olsen Jr., who chairs the Southeast coalition.

The organizations agreed to back each other’s efforts to protect their regions’ fisheries, Olsen said.

“Our tribes are under siege, but the unification of our people is a powerful move to defeat these toxic projects,” he said in a news release.

Olsen said the two regional efforts have similar goals, but some differences.

“With our issue, the mines are in a different country. Maybe our fight’s a little more uphill,” he said. “It’s hard to say which one’s harder, of course. The grass is always browner on the other side of the fence in this issue.”

He said the coalition hopes to expand the alliance to tribal groups in other parts of the state.

Developers of mines in both areas say they’re safe and will not damage fish or wildlife habitat.