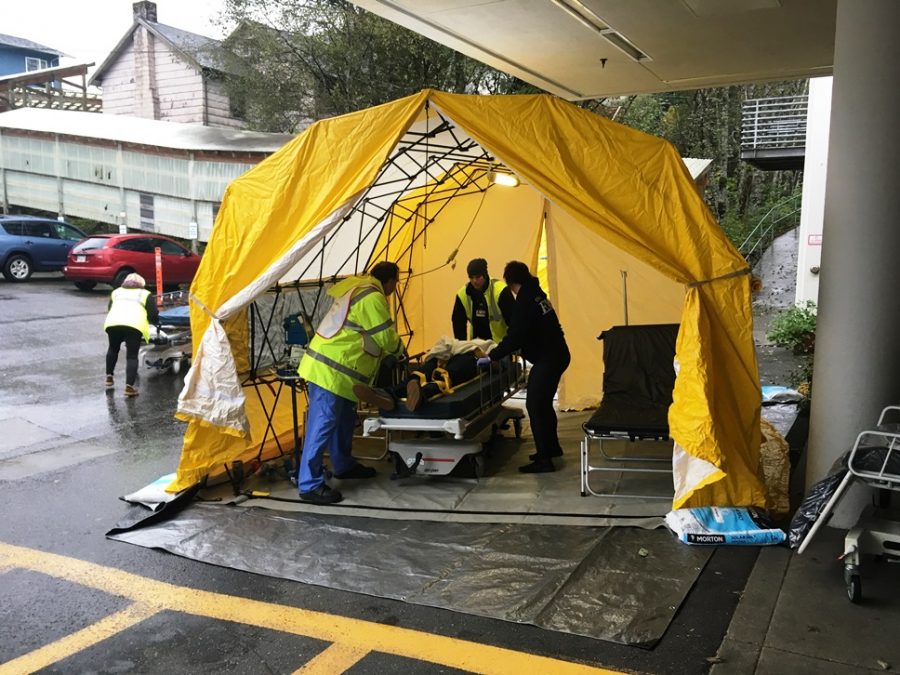 PeaceHealth Ketchikan Medical Center’s emergency room was one of the bases of operation for Saturday’s emergency preparedness drill. The drill was a chance to practice for a plane crash at the airport. (KRBD photo by Leila Kheiry)

It was a Saturday morning in mid-October in Ketchikan. It was cold, wet and windy: A perfect day for disaster.

Every three years, always on a rainy day it seems, Ketchikan practices for a plane crash. The drill involves pretty much every emergency response agency, and a whole lot of volunteers.

Mischa Chernick is a spokeswoman for PeaceHealth Ketchikan Medical Center. She says despite the weather, nearly 40 volunteers showed up at about 7 a.m. to become victims. Chernick says they were made up to simulate a wide range of injuries.

“That helps the people who are on the ground who are going to be assessing what their state is and where they need to go as far as staging areas, and levels of severity of injury,” she said.

“The shin is Vaseline, corn starch and then cocoa powder to give it the natural skin color,” Kelly said.

She says shin stays tacky. You can mold it onto the skin and build up fake wounds. 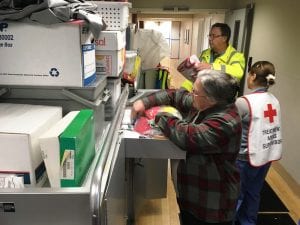 “You can impale things or make a deep laceration in it,” she said. “Like, when you do a laceration, you put black in the bottom of it to give it depth, then you put the red and just kind of build it up.”

After all the volunteer victims were made up and given instructions on how to act, they were taken over to the airport. Somewhat ironically, a big part of the challenge for responding to a disaster at Ketchikan’s airport is transportation.

The airport is on a different island, so it’s a ferry ride away from any real medical care. Perfecting methods to move injured people efficiently to the hospital is critical.

Everyone in the emergency room is on high alert, waiting for victims to arrive. In the front reception area, though, there’s a quieter response.

Chernick explains that reception-area employees are contacting colleagues to call them in to work.

“Each department calls a call tree of all of their employees to say a disaster has occurred, you’re being activated to come to work,” she said. “So they drop everything and come to work.” 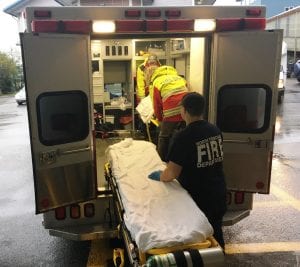 Back outside the emergency room, the first wave of victims has arrived. Two young men are taken from an ambulance into the first of two bright yellow tents. Chernick says that’s the start of the triage response.

“The first tent is where they begin the assessment process in determining how much evaluation they immediately need, the severity of the injuries,” she said.

Robert Cope-Powell is wheeled through the doors of the emergency room. He’s one of the code-red victims. And he’s pretty cheerful about it, joking with fellow code-redder Raighn Hudson, lying on the stretcher behind him.

I ask Cope-Powell if he’d show me his injuries.

“Door handle to the chest!” he announced, pulling down the sheet to reveal the wound.

Cope-Powell says he was in the bathroom during the crash, and that’s when he was impaled. 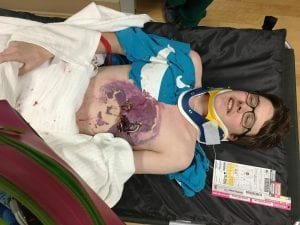 Robert Cope-Powell pretends to suffer from a door handle impaled in his chest. He was one of the volunteer victims for Saturday’s emergency drill. (KRBD photo by Leila Kheiry)

Hudson’s face is chalky white to simulate blood loss. He also was impaled, but with a spoon.

“I was eating pudding in first class,” he said. “And then it just kind of happened, I guess. And I got a broken hip, too.”

The two teenagers clearly were having fun, and there’s plenty of joking among responders, too. But they all are taking the drill seriously.

Bev Crum is incident commander at the hospital. She was coordinating everyone’s response and making sure all the materials are where they need to be. She paused for a moment to talk.

“This helps us plan together to utilize the resources we have in our community to be prepared for disaster events,” she said.

That includes plans for staffing, proper equipment, and updated communication methods. The small hospital also needs options for housing less-critical patients. For this drill, Crum says they added the Pioneers Home just down the street as a backup location.

“It’s practicing,” she said. “Because the more you practice, the better it is in real life.”

Crum says every time Ketchikan has one of these drills, different issues come up. They figure out how to improve their response, so if – or when — real disaster strikes, they’ll be ready. 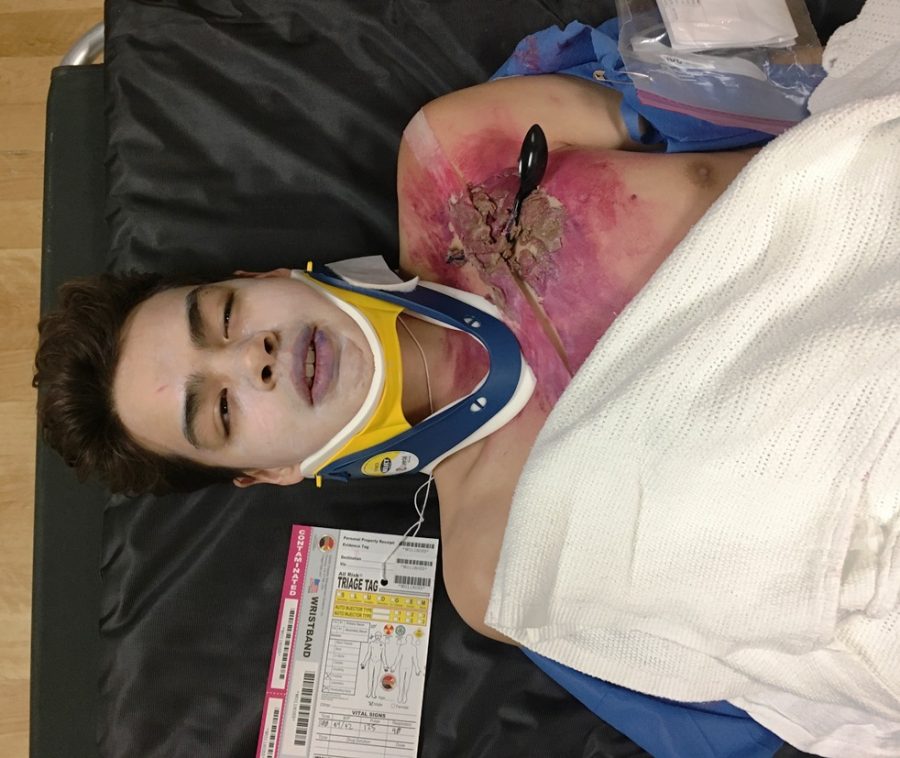 Raighn Hudson is one of the volunteer victims for Saturday’s emergency drill. His wound? A spoon impaled in his chest. (KRBD photo by Leila Kheiry)