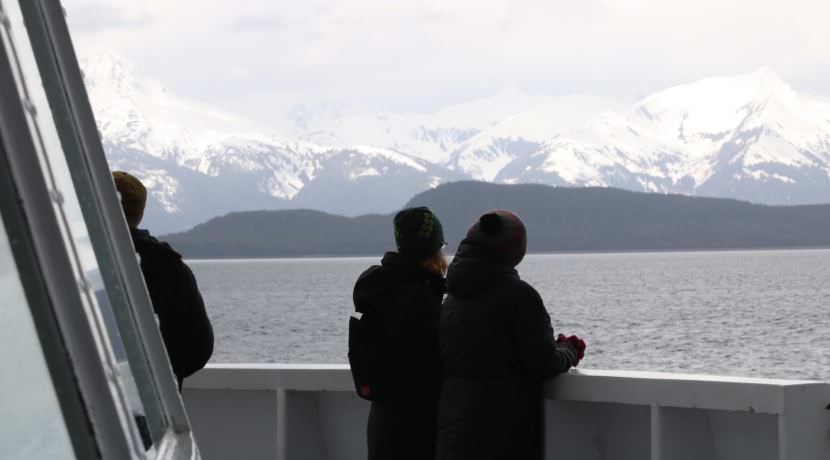 Passengers watch the scenery go by on the ferry Matanuska’s forward deck during a May 3, 2017, sailing from Juneau to Haines. Next May through September’s schedule just went out for public review. (Photo by Aaron Bolton/KSTK)

The Alaska Marine Highway System will operate without one of its mainline ferries next summer.

But it will be docked for major repairs, not sidelined or put up for sale. Those plans are part of a draft of next summer’s ferry schedule.

But a draft of next summer’s schedule could escape that pattern.

He said Alaska ports from Ketchikan to Dutch Harbor, plus Prince Rupert, B.C., and Bellingham, Wash., will mostly see the same service as the past summer.

“There can be some shifting around of that, especially in the winter for the special events: The Gold Medal, the music festivals, the sports teams moving around. And we do our absolute best to cover all that,” he said. “We usually have those things all locked in or at least know what we need to accommodate.” 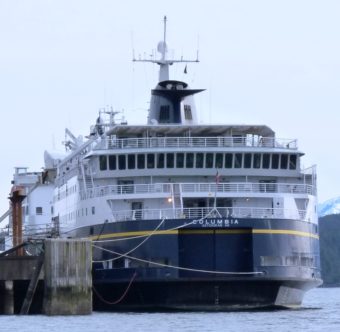 The state ferry Columbia has returned to service after almost a year docked for repairs. It is part of the summer 2018 ferry schedule. (Photo by Ed Schoenfeld/CoastAlaska News)

One change is the return of the ferry Columbia. It’s been out of service for close to a year. A propeller struck an unknown submerged object, probably a log, last fall. It resumed sailing Oct. 29.

Repairs took so long because replacement parts were no longer available, so they had to be built from scratch. The 500-passenger vessel is the largest in the marine highway’s fleet.

“That was paid by our insurance carrier,” he said. “That was in the range of about $3.5 million.”

But another ship will be out of service for the whole summer season. Falvey said the Matanuska, which can carry 450 passengers, will be tied up for some significant improvements.

“We’re completely rebuilding the engine room, right from the engines all the way out to the shafts and propellers and rudders and what not,” he said. “It’s a very major project and it will be gone for about 10 to 11 months.”

He said that work will cost about $32 million. It’s funded by the federal government, with a state match.

“Last summer, the Malaspina was in its overhaul. And the Malaspina and the Matanuska have roughly the same carrying capacities,” she said. “We’re just switching one ship out for what was switched out last year.”

The summer schedule covers May through September 2018, based on a spending plan that’s been reviewed by the governor’s budget office.

But the Legislature makes the final decisions and some powerful lawmakers have pushed for large cuts in recent years.

Falvey said the ferry system hopes to protect the summer schedule, since it will have already taken reservations for some of those sailings. 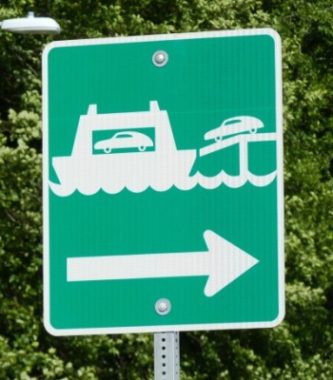 “We would hope that the magnitude wouldn’t be really severe,” he said. “If they weren’t really severe, we feel we could make those adjustments in the winter schedule.”

The marine highway faces other budget challenges this winter and spring.

A provision in an earlier spending plan takes a significant amount of money out of this year’s budget to fill a state health-care funding gap.

Falvey said he’s hoping lawmakers will vote to replace that money. The schedule will be drastically reduced if they don’t.

“If we were further into the season, it would most likely be a complete shutdown,” he said.

The ferry system is asking for feedback on next summer’s schedule. Written remarks are due by Nov. 10 via fax at 907-228-6874 or email at dot.amhs.comments@alaska.gov

A teleconference is planned for Nov. 16. Southeast schedules will be discussed starting at 10 a.m. Southwest and Southcentral schedules follow at 1 p.m. The toll-free number for both teleconferences is 1-515-604-9000, access code 279613.

The teleconference will be hosted at the Alaska Marine Highway Ketchikan office, 7559 North Tongass Highway.