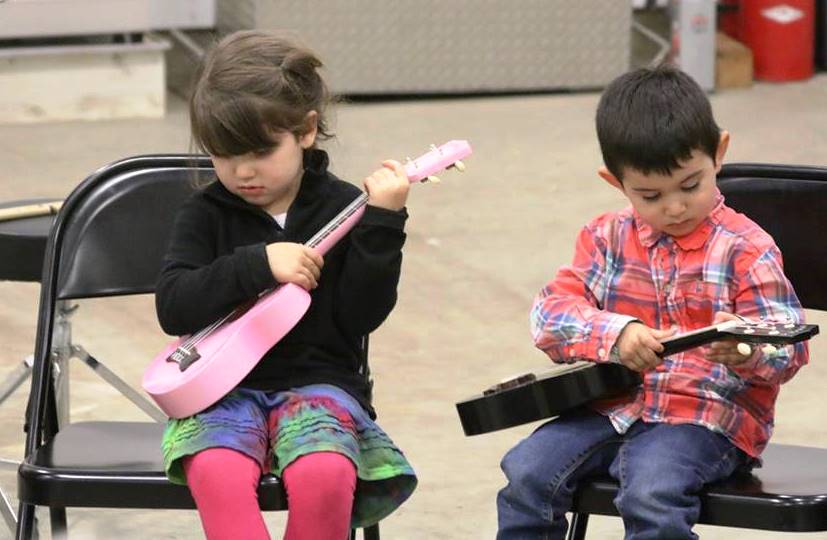 The small, rural schools that make up Southeast Island School District don’t have the means for formal year-round music programs. Recognizing the importance of music in education, though, the district brought down two music teachers from the Fairbanks-based nonprofit Dancing with the Spirit. Those teachers spent one week with students from each school, laying a foundation students can build on for the rest of the year.

In a short video clip, students in Kasaan on Prince of Wales Island strum instruments while singing a classic Alaska folk song. Many of these kids had just learned to play. 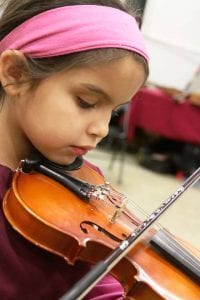 A student from Hollis School plays the fiddle. The school recently had visiting music teachers from Alaska-based nonprotit Dancing with the Spirit. (Hollis School photo used with permission)

Kasaan School is one of eight schools in the Southeast Island School District. Another is Hollis School, where teacher Lisa Cates took a break from lessons to talk about Dancing with the Spirit.

Cates said teachers in rural schools like Hollis have to teach everything, and she does try to get music into the program. But, “there was no way for me to bring it in an authentic way that really stuck.”

She said she heard about Dancing with the Spirit from local musicians, and started looking into how to bring that program to the island.

And then “something really fortuitous happened,” she said. “I got word that they were coming to Hydaburg last spring.”

Hydaburg has its own school district, but it’s relatively close to Hollis. Cates said the music teachers were able to add some time for Hollis during that trip.

“When they left, my kids were still playing the instruments,” she said.

That inspired Cates and Priscilla Goulding from the Southeast Island School District main office to work on funding to bring Stella Lyn and Jason Norris back to Prince of Wales.

During this trip, the two are spending about a week with each Southeast Island School District school. They already had their week in Hollis. Student Ben Moots talked about the instrument he ended up liking the most.

“One of my favorite things that we did, like the instrument, was the fiddle. Mostly because I felt like I had a connection with it,” he said.

Ben said he didn’t expect to choose the fiddle, but it turned out to be easier than one might think to learn the basics.

“There was a couple little tricks they had,” he explained. “Because there’s four string, they have green, purple, yellow and red.”

So the strings are color-coded, and there are markers showing where to place your fingers. Accompanying sheet music uses those colors and markers to indicate how to play notes. Cates said the schools get a digital version of the sheet music, so students can continue working on their own.

The instructors brought instruments with them – guitars, fiddles, ukuleles and mandolins – so students could try a variety.

Hollis student Kimejoe Lambeth said it took her a few tries to pick her favorite.

Each week of music instructions ends with a community performance and dance. Cates said the Hollis dance was at the fire hall.

“People who don’t have students in our school showed up at our hoe-down,” she said. “Hollis is a small community, and we had 65 or 70 people there.”

Music teachers Stella Lyn and Jason Norris say community tie-in is a key element to Dancing with the Spirit’s program. It’s provided music education in rural Alaska for more than a decade, mostly in the Interior.

“Until we started bringing the program down to Southeast Alaska, the furthest south it’s been in Alaska was Yakutat,” Lyn said. “But now we’ve brought it to Prince of Wales, Angoon and Pelican.”

The two spoke by telephone from Coffman Cove School, where they had just finished up that community’s week of music instruction — combined with Naukati School because of some time constraints.

Norris said music can help kids learn about themselves, gain confidence, and avoid risky behavior. He knows that through personal experience. 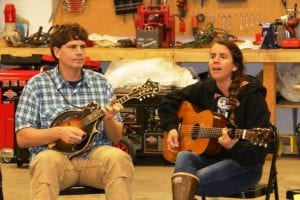 Jason Norris and Stella Lyn are music instructors with the Alaska nonprofit Dancing with the Spirit. (Hollis School photo used with permission)

Norris is a charter member of Bearfoot, an award-winning Alaska bluegrass band that grew out of music camps in Cordova. Bearfoot recorded albums, traveled extensively for performances and led workshops for youth.

Crediting Belle Mickelson, Norris said Dancing with the Spirit is an offshoot of that earlier summer music camp program.

“Belle, seeing the positive results of her idea to put together the staff band, decided to take it a step further and started this organization and started teaching camps in the villages,” he said. “But instead of them being after school, she got the school districts involved.”

The two instructors were headed next to Port Alexander and will finish up this tour in Thorne Bay. Lyn said the schools have been great to work with and they hope the district will be able to bring them back next year.

“This whole tour, we’ve been so impressed with the kids everywhere,” she said. “We work them hard and we think, ‘Oh we better give them a break,’ and say, ‘OK, everybody take a break.’ But they just won’t. They won’t leave the room and keep playing the instruments. They’re really hungry for it.”

One school they traveled to off Prince of Wales Island is the 11-student school in Hyder. That old gold-mining town is a tiny corner of Alaska on the mainland, right on the border with British Columbia.

Chad Dillman is head teacher at Hyder School. He said the kids loved the program, and learning music enhances skills for a range of subjects.

“So when they’re learning how to read music and play instruments, they’re working on math because they’re learning how to count time,” he said. “When they play songs from different regions of the world and different regions of the United States, that ties into our social studies lessons. So, the music curriculum really ties into the rest of our school day.”

Dillman said he is working on grants to buy a few instruments for the school. He also wants to sign up musicians in the community to mentor students, building on the new foundation to help Hyder’s kids become well-rounded, confident adults.