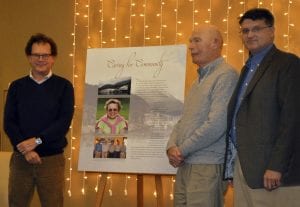 Cornelia “Pinky” Brindle died in 2008 after a five-year struggle with cancer, according to PeaceHealth. Her family donated $100,000 to the foundation in her honor for a cancer resource room at the local hospital.

The room will be a center for support and information for cancer patients and their families. An oncology nurse will be the Cancer Care Coordinator to help with travel coordination, infusion schedules, appointments and supplies. 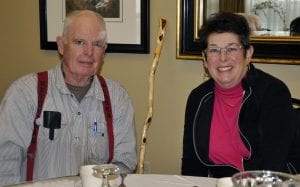 Dan and Karen Eichner attended the Philanthropy Day lunch. They donated funds for the Ken Eichner Healing Garden at the hospital. (PeaceHealth photo)

Other donors attended the luncheon, including Dan and Karen Eichner. They funded the Ken Eichner Healing Garden next to the hospital’s café.

The Foundation reached a milestone last spring when donations to the endowment fund reached $1 million. The fund will generate between $50,000 and $75,000 annually.

Those proceeds will pay for the hospital’s diabetes education department for the next two years, according to Matt Eisenhower, Ketchikan Medical Center Foundation Director.