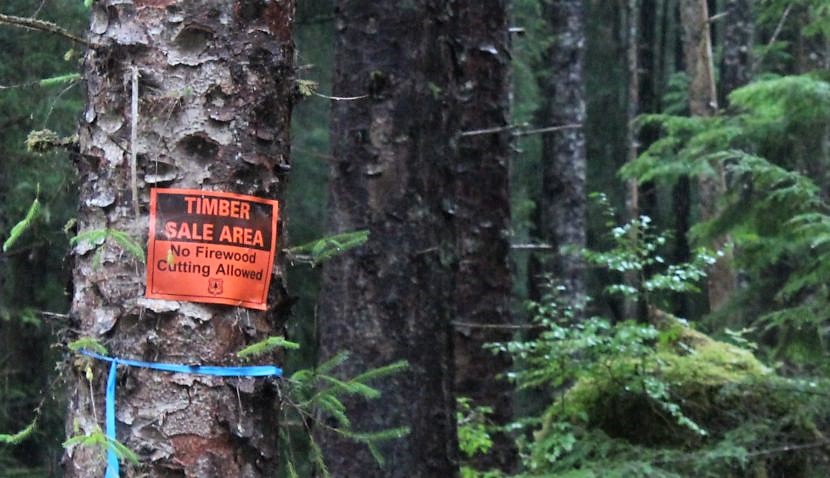 A timber sale sign is posted in the Tongass National Forest on Prince of Wales Island. The state is in court again, trying to end the U.S. Forest Service’s roadless rule, which limits logging and other development in the Tongass. (KRBD file photo)

The state of Alaska is again trying to overturn the U.S. Forest Service’s roadless rule.

Officials on Nov. 6 appealed a September court decision that threw out an earlier state challenge.

The rule mostly blocks logging in undeveloped areas of the Tongass National Forest.

It was established more than 15 years ago, but the Tongass was given an exemption, which was later overturned.

“It’s played a key role in the almost complete demise of the timber industry,” he said. “It’s impacted utility companies and rural communities who may have future plans to build additional roads to connect to the outside world.”

The Southeast Alaska Conservation Council is one of the environmental groups that supported the rule in court.

“They seem stuck in the past. Today’s economy here in Southeast is driven by tourism, recreation and fishing, not old-growth logging,” he said.

He said the timber economy could rebound if the roadless rule is overturned.

“It essentially provides the ability to manage in a much more flexible manner, not only just forest resources, but energy resources as well as mining resources on the forest,” he said.

Among other arguments, the state said the roadless rule violates federal legislation requiring the U.S. Forest Service to meet the demand for Tongass timber.

The state filed this case in 2011 in the U.S. District Court for the District of Columbia. The appeal was made to the D.C. Circuit Court of Appeals.

The state’s Lenhart said some earlier rulings have been close, so it’s worth another try.

“We’re relatively optimistic that a three-judge panel at the D.C. Circuit may well come to a different conclusion and may in part or in total invalidate the roadless rule this time,” he said.

SEACC’s Lindekugel said the appeal is a waste of time and money.

A separate challenge has already been rejected by the U.S. Supreme Court.

“Instead of working with local communities to change things on the ground for the long-term interests of everybody, they’re focusing on a fraction of the economy by propping up the timber industry at everybody’s expense,” he said.