Study and computer space at the Ketchikan Public Library.

“Because we really wanted to scope out, for each age group, what their suggestions were and what their thoughts were about the library.”

A summary of results was prepared in mid-October. Tully says 599 responses were received, of which 60 came from non-library users.

“We thought that was very good. Because we were particularly interested in people who don’t currently use the library and why they didn’t use the library. We felt that was important – to try and get that input.”

She says some respondents said they didn’t use the library because they’re not interested. Others indicated they access materials and the internet elsewhere. Tully says results showed many people are unaware of other library services. 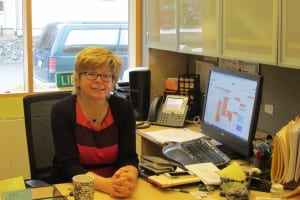 “So I think we have to market the incredible programs that we do, again, for adults as well as teens and children, and the other maybe more unusual services and equipment that we provide.”

Tully says one of those is the Ketchikan Volunteer Rescue Squad’s SPOT locator beacons. Hikers, campers and boaters can check them out of the library. The beacons are monitored by KVRS and can be activated in the event of an emergency.  Tully says the library does more than just check the devices out.

“Also, what we do, is we pay attention to when you say you would be overdue. And if we haven’t received the locator beacon back by then, we give you a call. If there’s no answer, or the people who answer have not heard from you, then we call the Ketchikan Volunteer Rescue Squad, and then they take over.

SPOT locator beacons are also available at the Alaska State Troopers post and at the Ketchikan Visitors Bureau.

Tully says, in the survey, staff was rated highly along with the collection of books, though some responders wanted more access to online books. She says improved technology, such as upgraded Wi-Fi and computers, was also suggested.

“And basically what that has given us are goals and objectives for the next five years to move us forward and to improve our services to the Ketchikan community.”

Tully says survey information was condensed and four main goals identified. She says these are to make adjustments to the building to make it more functional, improve marketing, review the materials the library currently provides and determine if these are what patrons want. She says the fourth is an internal goal.

“Of looking at our policies and procedures, how we support staff and the work that they do. Because, if we do a better job internally, that will allow us to be more cost-effective and improve our services to the public.”

The library advisory board meets this Friday at 6 p.m. to review the proposed plan. If endorsed, Tully says it will be presented to the Ketchikan City Council at its next meeting, and later to the Borough Assembly.