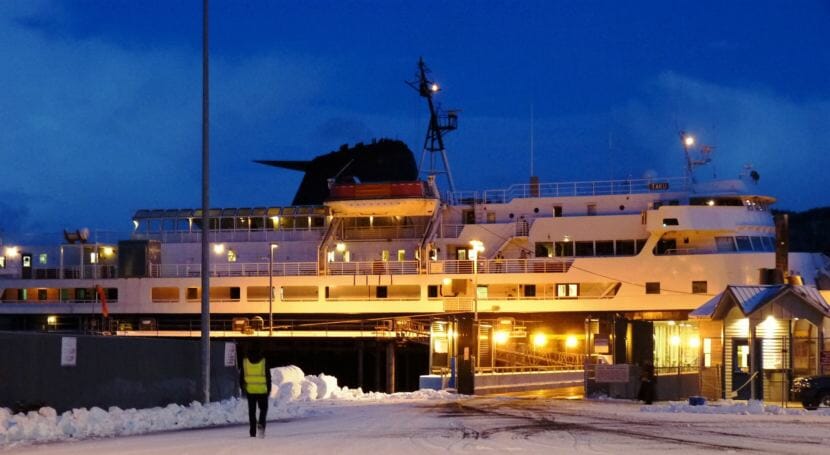 The ferry Taku waits to load passengers Jan. 22, 2012, in Sitka, while it was still sailing. It’s been sold to a company based in Dubai after a Portland, Oregon, bidder withdrew its offer. (Photo by Ed Schoenfeld/CoastAlaska News)

The state ferry Taku is not hip enough for Portland, Oregon.

Earlier this fall, a company based there placed the winning bid of $300,000 for the 54-year-old vessel. KeyMar LLC’s plans were to turn it into a floating hotel.

“They cited regulatory issues, potentially, other competing projects within their group, within their company … and things like that,” he said.

“The team did not want to introduce a property that wouldn’t be fully embraced by the surrounding community,” Cohen wrote in an email. He said the group is instead turning an old Columbia River school into a hotel.

After the Portland company pulled out, the state informed two other bidders from the last round that the 350-foot ferry was again for sale.

“Tuesday at 3 o’clock, we opened the bids. And the winner was the Jabal Al Lawz Trading Co., from the (United Arab) Emirates, who I believe is purchasing the ship to take it for scrap,” he said.

So it might end up in a marine junkyard. But he’s not sure.

Attempts to contact the company were not successful. But the Juneau Empire reports the company plans to use it as a ferry in the Philippines.

Falvey said the company already paid a $25,000 deposit. The balance will need to be in hand before he can sign sale documents. The timing has not been determined.

He said the state will continue to pay to store the Taku at Ketchikan’s Ward Cove for 30 days after the sale is completed.

After that, storage or transport is up to the buyer.

Falvey said the company indicated it could be reflagged to another country, which would allow transit through U.S. waters.

Right now, the Taku lacks equipment and certifications needed to sail under the U.S. flag.

The Taku was tied up in 2015 as the ferry system looked for ways to balance its budget. The ship can carry about 350 passengers and 50 vehicles. It has 40 staterooms, a cafeteria, observation lounges and a covered solarium.

State officials have been trying to sell the Taku since last spring. It was first priced at $1.5 million.