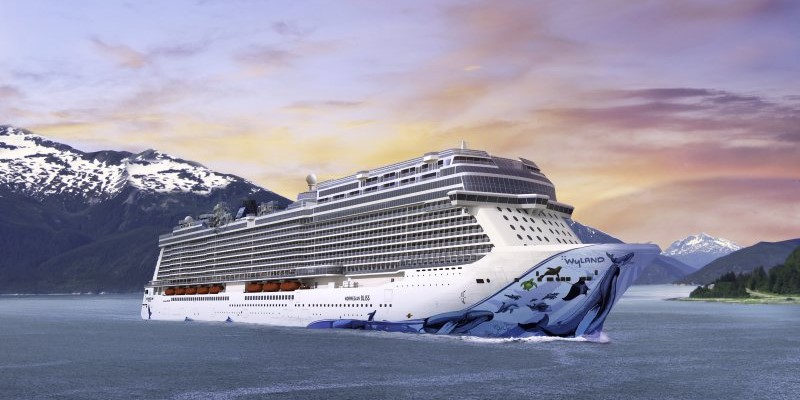 The Norwegian Bliss, shown in a promotional image, will begin sailing Alaska waters in about six months. It’s one of two megaships slated to sail the Inside Passage. (Image courtesy Norwegian Cruise Line)

Larger and fancier cruise ships will begin visiting Alaska ports starting this summer. The so-called “megaships” are part of a trend that’s sending more and more tourists to Alaska by sea.

If you think Alaska cruise ships are big, you ain’t seen nothing yet.

The 4,000-passenger Norwegian Bliss starts making port calls in June. The 5,000-passenger Ovation of the Seas shows up the following year.

Add 1,200 to 1,500 crew members and either will exceed the population of all but three Southeast cities.

“I believe people will notice the size difference in these ships, particularly the Ovation of the Seas,” said John Binkley, president of Cruise Lines International Association’s Alaska branch. “That is significantly bigger than the ships that people would normally be seeing throughout Alaska.”

The Bliss and Ovation will carry up to twice as many passengers as some ships already sailing here.

Chris Gray Faust is senior editor of Cruise Critic, an analysis and sales website owned by TripAdvisor, a popular travel-review app. She said Alaska is catching up with other cruise destinations.

So, why are they headed our way?

“It’s a somewhat exotic destination, yet it’s on U.S. soil,” Binkley said. “And it’s someplace that people feel comfortable and safe to visit.”

That was also the case after the 9/11 terror attacks.

The 5,000-passenger Ovation of the Seas begins its 26-mile conveyance to the North Sea March 11, 2016. It will begin sailing Alaska’s Inside Passage beginning in 2019. (Photo courtesy Royal Caribbean International.)

The Ovation is leaving its China and Australia routes due to a drop in demand.

The Norwegian Bliss is a new ship that adds to the overall number sailing Inside Passage waters. Binkley said the Ovation of the Seas will replace a smaller ship.

“We are gaining slightly on the number of ships, but most of the capacity increase, the increase in the number of passengers is because of the larger ships, rather than additional ships,” he said.

The Bliss will sail week-long round-trips out of Seattle, stopping in Ketchikan, Juneau and Skagway. It will also sail to Sawyer Glacier in Tracy Arm Fjord, south of the capital city.

The Ovation will be based in Seattle, too. Its Alaska itinerary hasn’t been posted yet. But it’s likely to follow a similar route.

She points to the Norwegian Bliss, which advertises the largest go-kart race track on the seas. It also has a laser tag set that looks like it’s on the Death Star from “Star Wars.”

“One thing that’s very nice for passengers going to Alaska is they have a 20,000-square-foot observation lounge with 180-degree views,” she said. “Passengers in that lounge, they’ll really get the beauty of the landscape right there. They’ll be able to see it all as they come in.”

The Ovation of the Seas advertises skydiving and surf simulators, as well as robotic bartenders. But it’ll give the Bliss a run for its money in terms of scenery.

“They have what’s known as the North Star, which is a compartment that rises above the ship, like a traveling viewing compartment,” she said. “People should be able to get good views from that and certainly from the shore, people will notice that.”

The Bliss is owned by Norwegian Cruise Line. The Ovation is owned by Royal Caribbean International. Both sail other ships to Alaska.

Editor’s note: This report was updated to state that both cruise lines already sail the Inside Passage.