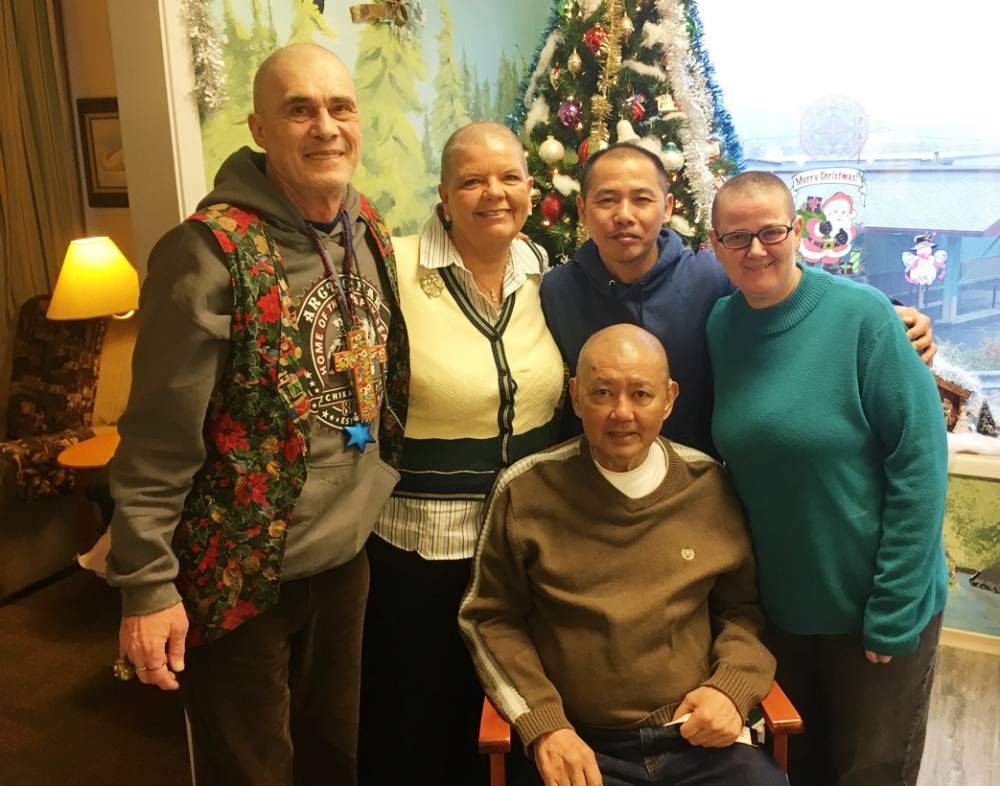 Pictured are some of the people at Rendezvous Senior Day Center who shaved their heads in support of Bobbi Kessinger. From left are Don Harrington, Licha Kelley-King, Phong Nguyen, Kessinger and Virgil Panchle (seated). (KRBD photo by Leila Kheiry)

Like millions of others worldwide, a Ketchikan woman is facing months of treatment after she was diagnosed with breast cancer. But, she’s not facing it alone.

Until very recently, Bobbi Kessinger had long, luxurious, flowing chestnut locks. Her hair went all the way past her knees.

After she found a lump and was diagnosed with breast cancer in October, she said she asked three times if they were sure she’d lose her hair during cancer treatment.

So, she shaved it all off.

It was a way of taking control, Kessinger said. But she started a movement of sorts. Her husband shaved his head, too. And some friends. And some of the seniors who come to the center every day. And her coworkers – including her boss, Licha Kelley-King.

Kelley-King said a couple of them had told Kessinger early on that they would join her if she decided to shave her head. But they didn’t expect so many others to join in.

“There were nine of us who shaved our heads for Bobbi on the same day. … It was a wonderful party,” she said. “Everyone in the center got involved, whether they shaved their heads or not, they were cheering her on and I think making Bobbi realize that she’s not alone, that there’s lots of people who love her and support her.”

Kelley-King said many of the seniors who come to Rendezvous depend on Kessinger to help them with various tasks, and she goes way beyond her job description to provide that help.

So, how does it feel to go from Rapunzel-length hair to a buzz cut?

“Actually it feels good,” Kessinger said. “It’s easy to take care of. I keep thinking, I should have done this years ago. What was I thinking? The only thing is getting acclimated. Getting used to the outside. (It’s a) little chilly.”

Kelley-King agrees it’s colder without hair, adding that it feels particularly weird in the shower.

They also get looks. And questions.

“It’s funny when somebody comes in here and there’s several of us in here and we all have shaved heads,” Kelley-King said. “People’s eyes go like….. What kind of weird cult is this?”

But, that gives Kessinger an opportunity to spread a message. She wants to encourage people to get regular checkups.

“I don’t go to the doctor. It took me 20 years to go, and it took this to go to the doctor,” she said. “Mammograms – you only have to get every two years or so. And it’s nothing. A little squeeze. But you could catch it early.”

Kessinger said her first mammogram was Oct. 31st – Halloween. She showed up dressed as Pippi Longstocking.

Kelley-King said another message they want to spread is: Let people help. So many times, she said, people facing cancer, or any hardship, don’t want to reveal it even to loved ones.

“You need to let people care about you and show you how they feel about you,” she said. “And I’m very grateful that Bobbi’s letting us do that.”

Kessinger faces 16 weeks total of chemotherapy, followed by a lumpectomy. How that goes will determine the next steps. No matter what, though, she knows her friends are there for her.