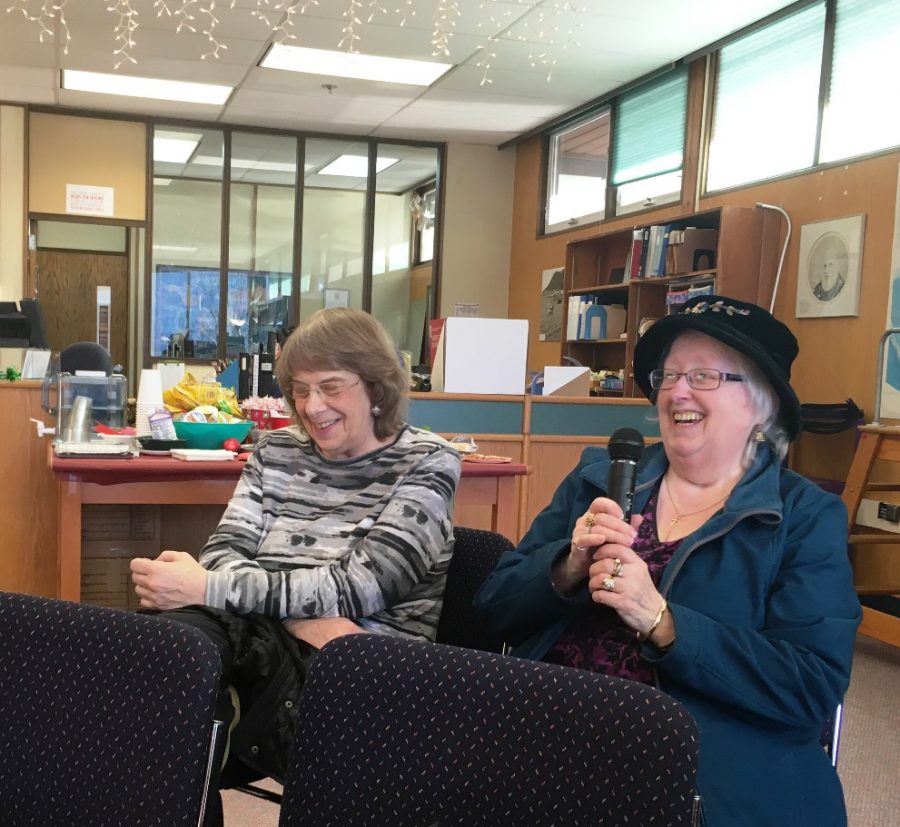 There was no formal presentation for the December Ask UAS event — just coffee, a light lunch and a microphone.

People who showed up were asked to share their memories of Christmas in Ketchikan. Among those memories were rather risky sledding parties, and magical visits with Santa.

A handful of people attended the University of Alaska Southeast Ketchikan Campus Library event, and were eager to talk about Christmases of the past.

Kathy Bolling recalled growing up on Grant Street, in a house with a big rock fireplace, and real tinsel on the tree.

“There was a fellow who got all dressed up in Santa gear and went around door to door. Terrifying and wonderful all at the same time,” she said. “I remember where I was sitting in the living room and looking at the arch of the front door, and having Santa standing there, and just trying mentally to say, ‘I’ve been good. I have been so good!’”

But Bolling’s sister, Suzan Thompson, said she doesn’t remember that at all.

Thompson does remember more community events during the holidays, hosted by fraternal clubs like the Eagles and Moose.

“I remember particularly the Elks at that old building downtown that later became the Fireside and now it’s part of the arts … complex (First City Players),” she said. “That huge room upstairs that had a big stage and all the gifts were lined up there for little kids, and stockings. It was just like this wealth of riches.”

Louis Scott said he remembers how much fun Christmas parties were at the Eagles Club.

“I remember there being massive amounts of people there, and of course my friends were there to talk to their friends. But we didn’t care about their friends, we were waiting for Santa,” he said. “I do remember specifically, everybody would say, ‘Santa’s coming soon. Santa’s coming soon.’ And then somebody would get up on the roof and start making a ton of noise. All the kids would just immediately start (saying) ‘Oh! Goodness! It’s Santa! He’s coming!’”

Lynn Clay grew up on Millar Street and said one of her big memories is sledding.

“We would go to the top of Millar Street, and there were at least 10 of us kids. And we would hook all our sleds together and go down to the bottom of Dunton,” she said. “And sometimes someone, you’d hear at the beginning, yell, ‘CAR!!’ And everybody would have to uinhook and scatter so we didn’t get run over.”

That reminded Thompson of a little scandal back in the 1960s.

“Where a bunch of local notables got arrested for sledding down, it must have been down Bawden Street past the old hospital,” she said. “I guess the police department told them not to do that, but they were all about three sheets to the wind.”

Clare Bennett grew up in New Jersey, and said a tradition that started in her childhood involved buying a tree and decorating it on Christmas Eve while eating little individual pizzas. She’s continued that with her family, and added a tradition of homemade ornaments, and others that are special to a family member. She said her son’s new wife joined them for Christmas two years ago.

“Her friend does the whole perfect artificial tree with the blue and the white and the red,” she said. “She looked at ours and I thought, ‘She’s going to think this is so pathetic.’ And she’s like, ‘I love this!’”

Bennett said she’s happy to know that her family tradition of pizza and homemade ornaments on Christmas Eve will continue with the next generation.

Judith McQuerry said her first Christmas tree in Ketchikan was a spruce, which shed needles that stuck around for months. She quickly learned to only use bull pines.

Even then, though, “we have had some really astoundingly ugly trees over the years,” she said. “I can remember tying them to the ceiling so they wouldn’t fall over. Or wedging them into the corner and canting them backwards so that when we put the ornaments on, it wouldn’t cascade.”

Kathleen Weichelman grew up in Nebraska. She remembers her dad pulling her on her sled behind his car. She also remembers beautiful real Christmas trees, and a valuable lesson from her mom in gift-giving.

“She told me to pick out a book for a friend of mine, I thought. So, I just went into Miller and Paine, a big department store in Lincoln, and picked out a book,” she said. “And then Christmas morning, I opened this book and it was that book. And it wasn’t anything I really wanted. So, from then on I’ve been really careful when I pick out gifts for friends and loved ones, because I had been so casual about it. Thanks, Mom!”

The group also talked about Ketchikan’s Christmas Boat Parade, which one woman said started in the 1960s. That tradition faded out for a while, but then was resurrected. It involves decorated boats sailing up the Tongass Narrows.

As is also traditional in Ketchikan, weather always plays a factor in whether that event occurs.