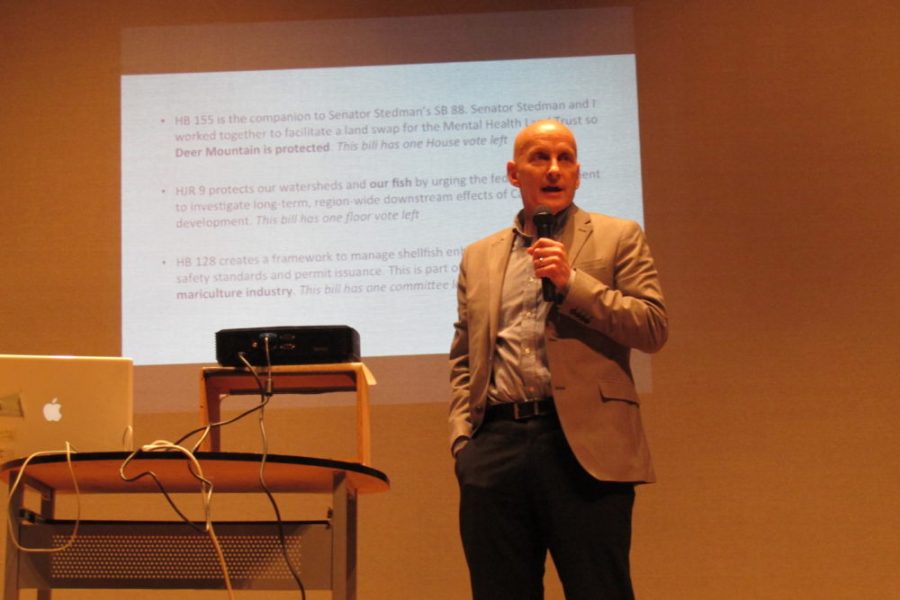 Rep. Dan Ortiz of Ketchikan gave an update Tuesday to the Ketchikan Gateway Borough Assembly about the upcoming legislative session.

Rep. Ortiz focused his presentation on Gov. Bill Walker’s proposed budget for the state, which is the starting point for the Legislature’s budget process. Ortiz said he’s looking for feedback from constituents on that proposed spending plan.

Ortiz adds that the Legislature has been slow to approve state budgets in recent years, and he hopes that will improve this session.

“Because of the fact that we’ve been slow in passing our budgets, employees – teachers – have received layoff notices throughout the state because of the unknown, uncertainty of what the funding will be for education,” he said. “And of course the ferry system. We’re familiar with how the ferry system needs to know what their funding level is so they can publish a schedule that they can actually meet.”

Ortiz said the governor has proposed a rule to address that, and he also supports a separate citizen initiative that would bar lawmakers from receiving a per diem if they are late approving a budget.

The governor’s budget calls for the same level of funding for education as last year. Ortiz said that doesn’t address inflation, but at least it’s not a cut. Overall, he said the governor’s proposed spending plan is about the same as last year.

Ortiz told the assembly that the proposed budget also has a deficit similar to last year’s. Savings will no longer cover that $2.5 billion, he said, so the governor has called for using a Percent of Market Value draw on Permanent Fund earnings to cover about $2 billion of that deficit.

“The idea is (to) draw on the account, but not to the level where it can’t sustain itself and even grow, (or) at least keep pace with inflation,” he said.

The governor also has put together what he calls the Alaska Economic Recovery Plan. Ortiz said that’s an area where he could use some feedback.

“And what it does, is it institutes a 1.5-percent wage tax on people who earn wages, or self-employment tax for people who are self-employed, a 1.5-percent tax,” he said. “Which, just: Tax. That’s quite controversial. Nobody gets excited about paying taxes, that’s for sure.”

But, Ortiz said that tax would go toward infrastructure that benefits everyone. That includes renovations and repairs at the state Pioneers Homes, harbor repair grants and home weatherization improvement grants.

That wage tax is meant to be temporary, and would sunset after three years.

“The question is, do we as a state – are we going to be better off making these investments now?” he asked. “These are all what the governor refers to as deferred maintenance costs that are going to be out there. They’re not going to go away. Do we need to start addressing those right now? And if we do, are we willing to pay a tax for that? That’s the question.”

Assembly members had some comments for Ortiz. Rodney Dial noted that taxes are rarely temporary, even when they have a built-in sunset date. And Sue Pickrell asked about funding for the Alaska Marine Highway System.

“Have you had any indication as to cuts or to discussion on whether the Alaska Marine Highway is going to take a bigger cut than other transportation needs in the State of Alaska?” Pickrell asked.

“Good question, Susan,” Ortiz responded. “And it’s very important and something I work really hard on in terms of trying to protect fundinf for that key component of our transportation system.”

Ortiz said the governor’s budget funds the ferry system at $88 million. He said he contacted ferry officials to see if that would be enough. They told him it would meet the existing service schedule, and maybe a bit more.

In response to a question from Assembly Member Alan Bailey, Ortiz said he’s optimistic about Alaska’s revenue stream in the future. That’s partly due to recent congressional action allowing oil exploration in the Arctic National Wildlife Refuge, along with continued development of a state natural gas pipeline.