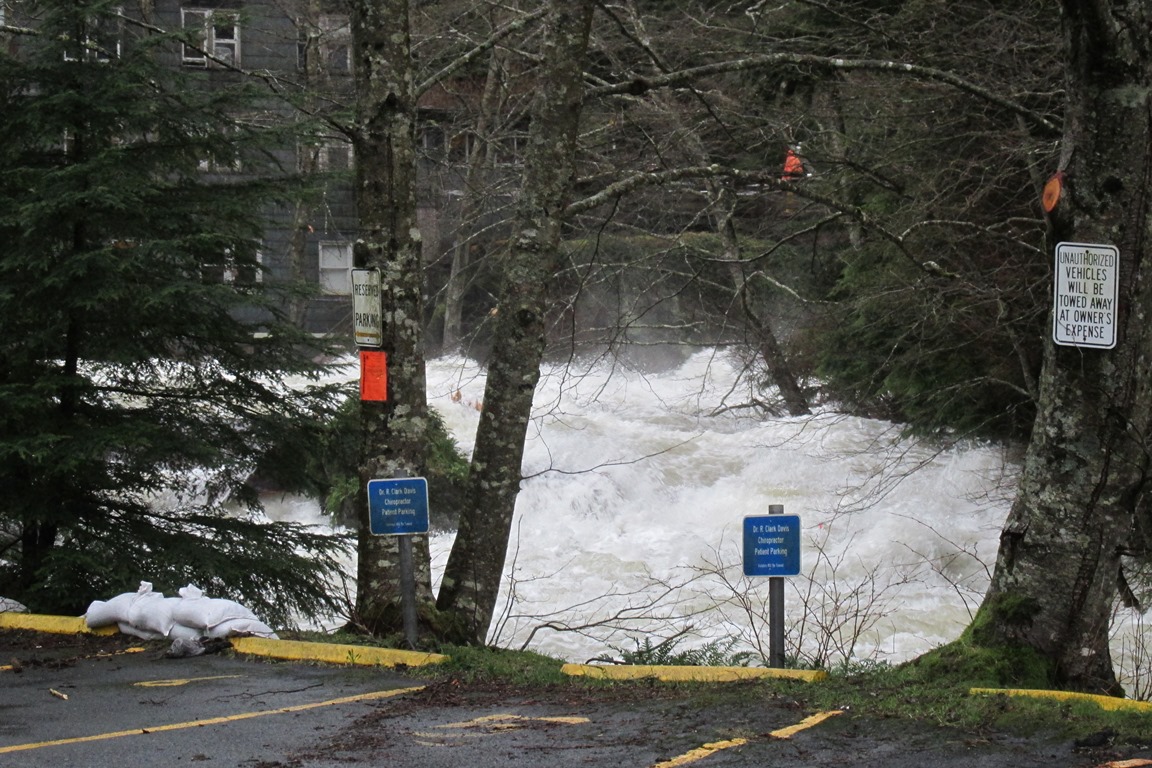 Ketchikan Creek is seen during a flood in 2015. That flood led to a few flood insurance claims from properties affected. (KRBD file photo by Leila Kheiry)

The Ketchikan Gateway Borough has been a voluntary participant in the National Flood Insurance Program since 1975. But now, some borough officials want to explore leaving the program.

That was prompted in part by proposed new flood-zone mapping that would significantly expand the number of Ketchikan property owners required to carry flood insurance.

All the information currently available shows the flood-zone map expansion in Ketchikan’s borough is going to happen whether the community likes it or not. And mortgaged homes within those flood zones will be required to have flood insurance whether homeowners like it or not.

That was the message borough planner Richard Harney conveyed to the Ketchikan Gateway Borough Assembly during an approximately one-hour presentation about the National Flood Insurance Program.

“If we opt out of the program, will it make my life easier? Yes. I won’t have to do regulatory work and review these permits,” he said. “Will the homeowners still have to get flood insurance? Yes. They will. Just not through the NFIP. They’ll have to go find it somewhere else.”

Harney explained that by participating in the federal program, the borough agrees to enforce NFIP regulations. In exchange for that, he said, local property owners have the option of less-expensive NFIP flood insurance, which is offered through the Federal Emergency Management Agency.

Until the recent proposed updates to area flood zone maps, the only portion of the borough where flood insurance has been required are low-lying areas within the City of Ketchikan – not including Shoreline Drive, which was annexed by the city since the original maps were drawn.

Harney said the updated maps cover pretty much all of Revillagigedo Island’s road system. And the number of properties that will be included in flood zones will skyrocket from 48 to about 1,100.

“It’s all the coastal properties going from Settler’s Cove all the way basically to Herring Cove,” he said.

And all of those properties – at least those with mortgages – will have to carry flood insurance.

Like with most insurance programs, the payout for premiums over the years has been more than the claims. But the profit margin for Ketchikan seems pretty high. Harney said since 1990, the small number of Ketchikan properties in the program have made three claims totaling $100,000. In that same time frame, he said, local insurance premiums paid to the NFIP have totaled about $2 million.

Harney said the average price of flood insurance in Ketchikan is currently about $2,000 a year. But, he clarified that many of the participants are larger businesses, such as fish processors. The average statewide is closer to $600 a year.

Harney added that properties within the new flood zones will need elevation certificates signed by a certified engineer or surveyor. The cost for that starts at around $500. Once it’s done, though, the certificate is good for the life of a structure, as long as there aren’t significant changes to the property.

Property owners can appeal inclusion in the flood zone maps, if they can show good reason.

“But with that, there has to be some substance to the comments. ‘I don’t like this’ isn’t going to cut it for FEMA,” he said. “They want somebody to prove that their science is wrong.”

“$2 million has left this community and we’ve benefited less than $100,000 for participating in this program,” he said. “I think it’s clear to me that this program is simply a means to subsidize the losses in the hurricane zones. But the question is: Do we dare opt out? I think we need to look at it.”

The maps aren’t slated for adoption until 2019, so the assembly has some time to think about it.

Assembly Member Rodney Dial suggested an advisory vote for the fall ballot, to get a sense of what the public wants. Harney stressed that whether or not the assembly votes to adopt the maps, lenders offering mortgages will be required to follow them.

Assembly Member Alan Bailey said the decision to opt out of the program needs to be carefully considered, but he agrees that it’s infuriating the community doesn’t appear to have any local control of this issue.

“This could very well affect a lot of our community and the future of our community, how we develop, the number of people that want to come live here on the coastal areas,” he said. “This is a beautiful place to be, if you can afford it.”

Harney told the assembly that a public information event has been scheduled for Jan. 25. There will be draft maps for people to look at, and information about flood insurance. He said property owners that would be affected by the change will be notified before that meeting.

A three-month public comment and appeals period will start later in January.

The public information event is scheduled for 5 to 7 p.m. Jan. 25 at the Ted Ferry Civic Center.