Stedman pre-files bill to limit use of Perm Fund earnings

Senator Bert Stedman visited Ketchikan last week to talk with local officials and media before the upcoming legislative session. He stopped by KRBD. Here’s a summary of that interview, including details of a proposed constitutional amendment for using Permanent Fund earnings.

The state’s budget deficit will continue to be the main topic for the Legislature this coming session, but Sen. Bert Stedman has a potential solution – at least a partial one. 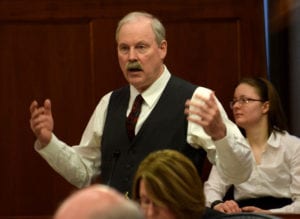 Stedman has pre-filed a resolution, SJR9, that would spell out how the state can use Permanent Fund earnings, but it also ensures that individual Alaskans would continue to receive dividends, and at a higher level than recently.

His bill calls for taking 4.5 percent from earnings each year.

“Two percent of that would go to dividends, minimum. The 2.5-percent balance could go either added to dividends, back to the Permanent Fund or government services,” he said. “Clearly, the next several years, it’s going to be government services, that’s not any surprise. That dividend rate would be about $1,800 a year. It would block the Legislature’s ability to draw out of the Permanent Fund over 4.5 percent a year.”

Stedman said that without constitutional protection, he’s concerned the Legislature will start relying on the Permanent Fund to cover the deficit, and he wants to protect that resource.  He said he doesn’t know yet how much support his resolution will get from other lawmakers, but he thinks the public will like it, in part because it guarantees a dividend.

Currently, there is no such guarantee.

If approved by the Legislature, Stedman’s proposal would be placed on the fall ballot for ratification by voters.

Even if that makes it through all the hoops, though, it doesn’t address this year’s budget. Stedman said the governor’s proposed spending plan is pretty status quo, and still has a deficit of about $2.5 billion.

To make up that deficit, Stedman said he expects there will be a draw on Permanent Fund earnings, and the Legislature will take what’s left of savings. He said he’d rather not look at new taxes until larger revenue sources have filled in most of the budget gap.

Stedman said it will be difficult to find any more significant cuts without drastically affecting services.

One vulnerable service is the Alaska Marine Highway System. Stedman recalls what he referred to as a less-than-transparent budget process from last year.

“Try to make sure we have all eyes on deck watching (to) make sure there are no curve balls embedded in it, like the (Budget) Director found this year. There was a surprise shortage of funds,” he said. “The railbelt has the votes to do what they want to with the Marine Highway. They might as well just do it in the light of day, run us over fair and square.”

That budget provision took $23 million from the ferry system to make up for a shortfall in health-care funding.

The Legislature had some trouble last year reaching agreement on the budget, and had to reconvene in multiple special sessions. Stedman said that’s partly the result of a divided government. The Senate is Republican-led, a coalition leads the House, and Gov. Bill Walker is non-affiliated.

“So, we’ll have lots of dialogue. At the end of the day – hopefully at the end of 120 days – we’ll have a budget out, which we should, in my opinion, be done and not have special sessions,” he said.

While he believes the work should be done within the regular session, Stedman said he doesn’t support an initiative that in part calls for barring lawmakers from collecting a per diem if they don’t approve a budget within those 120 days.

In fact, he called it ridiculous.

“Do you really think you’re going to call the legislators to Juneau on a 30-day notice and not compensate them at all?” he said. “Who is going to be on your legislative team? Who is going to run for the Legislature? This isn’t a kiddie-game.”

Stedman said lawmakers need to be paid for their time. They can’t sleep on sofas and eat nothing but pilot bread and peanut butter, he said, at least not if the public wants good decisions.

While the state budget remains problematic for the short term, Stedman is optimistic about Alaska’s long-term fiscal health. Potential development of a state natural gas line is one reason, but the bigger reason is new oil exploration wins, including in the Arctic National Wildlife Refuge.

“We’ve got a lot of oil outside of what’s being pumped today and those recent finds, and now we have the opportunity to open up the 1002 (area) in ANWR, which could have a field the size of Prudhoe Bay,” he said. “Whatever it is, it’s big.”

Stedman said the economy moves in cycles, and he believes the state is coming out of the current economic slump.

We just have to get through this upcoming session.

“This year’s going to be a tough year,” he said. “We’ve been in special sessions so long through the last year — about eight months, the attitude is pretty sour.”

Stedman said he thinks lawmakers will focus pretty exclusively on the budget, in hopes of approving a spending plan within the regular time frame. Then they can take a break from each other.

The Legislature convenes on Jan. 16.