Forests along Peril Strait shine on a sunny Sept. 15, 2015. Several government agencies are selling timber to Southeast Alaska mills until larger stands of trees are made available. (Photo by Ed Schoenfeld/CoastAlaska News)

The state just sold timber from its Southeast Alaska forest to the region’s largest mill. It’s part of a multi-agency effort to keep the area’s logging industry alive. But some say it’s time to let it go.

Klawock’s Viking Lumber was the only buyer interested in the North Hollis timber sale. It’s about 230 acres on Prince of Wales Island, the center of what’s left of Southeast’s timber industry.

But it wasn’t sold under the usual bid program.

State Forester Chris Maisch said it was a negotiated sale based on more than the price.

“The kind of things we’re looking for (are) would the wood be used to manufacture products in the state, how many jobs … will be created from the project. Of course, the price being offered for the timber is also a consideration,” he said.

It’s not huge acreage as timber sales go. But it’s one of several small state sales aimed at keeping Viking and other parts of the industry alive.

“We have stepped up our timber sale program because of the shortfall of federal volume here over the last several years,” he said.

The North Hollis sale was finalized in December. The state forest also sold a second parcel to Viking last year, near Coffman Cove, also on Prince of Wales Island.

The Alaska Mental Health Trust Land Office is trading some controversial timberlands near cities for acreage in the Tongass National Forest.

Executive Director Wyn Menefee said the office is planning for sales this year and next.

“That’s going to be very vital for the timber industry down there because they’re short on timber supply and we are the ones that probably can provide, after we get the land through the lands exchange, the necessary fiber to market,” he said.

The first will be near Naukati, which is also on the island.

“We will be putting that old-growth available for timber markets in Southeast, which hopefully will give them enough breathing room to allow the Forest Service enough time to get timber on the markets,” he said.

Around 2,400 acres will be in the first sale, which will be offered this spring. Public comments on the overall plan are due by Jan. 15.

The Tongass National Forest has been the largest source of timber on public lands for decades. But management changes, lawsuits and a shortage of older timber has slowed its sales.

“We’re also working on environmental impact statements for sales on the Petersburg and Wrangell Ranger districts, as well as multiple sales as part of the Prince of Wales landscape level analysis,” he said.

Robbins said the Forest Service is working with other timber owners. They include the state, the land trust, Sealaska regional Native corporation and the University of Alaska. 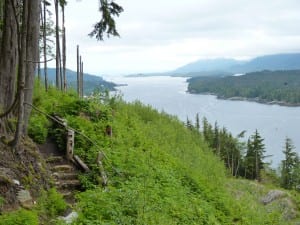 Portions of the Tongass National Forest can be seen from Ketchikan’s Rainbird Trail. (File photo)

“We convened about four or five years ago to coordinate timber sales and improve economies of scale, reduce overall costs and help the economics of timber sales for Southeast Alaska,” he said.

“They just want to continue to do business the way they have been doing business,” said Bob Claus, a Prince of Wales Island resident and a member of the Southeast Alaska Conservation Council.

He and others question sales that continue supplying old-growth timber to what he calls a dying industry. He said they’re damaging the environment, including salmon, deer and wolf habitat.

“So you have Sealaska, you have mental health trust, you have state lands and you have the Forest Service … all pushing for more old-growth harvests out of a place that just can’t take it anymore. They’ve already taken all the old growth that they can take. And probably more than was acceptable,” he said.

The Tongass is being managed under a plan to move away from harvesting old-growth trees. It calls for a new industry based on younger timber, also called second growth.

But a federal agency last fall determined Congress has the right to review – and possibly overturn – the plan.

If that happens, the Tongass could resume selling larger stands of older trees, which is what the industry wants.