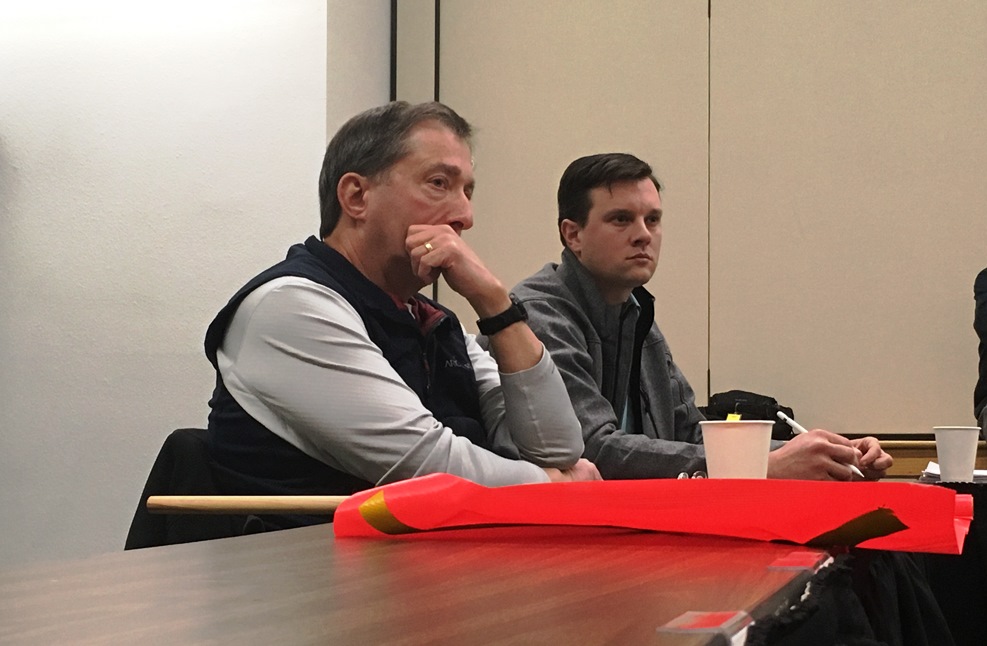 David Epstein and Chris Goins from the Alaska Department of Transportation listen to comments during a public meeting in Ketchikan about crosswalk safety improvements. (KRBD photo by Leila Kheiry)

Crosswalk safety, and how to improve it, was the topic during a special public meeting Wednesday afternoon, hosted by City of Ketchikan and Alaska Department of Transportation officials.

In mid-December, 68-year-old Ron Fulgencio was using the crosswalk on Stedman Street near Tatsuda’s IGA when he was hit by a truck. He died from his injuries.

It was dark and a little snowy. Police say Fulgencio was wearing dark clothing. But he was in the crosswalk, which should be a reasonably safe place to cross.

After his tragic death, members of the community asked what could be done to improve pedestrian safety at that location, and other places in Ketchikan where accidents seem to happen too often. City officials and DOT got together to talk about options, and then presented some of their ideas to the public on how to move forward.

Deermount and Stedman is where Fulgencio was hit.

Hilson said the city also identified ways to improve safety everywhere. They include a marketing campaign to raise awareness among pedestrians and drivers, and making reflective gear accessible for pedestrians.

He said lowering the speed limit on Stedman near Deermount would help that location specifically, along with better lighting. A speed monitoring sign could help make drivers aware of how fast they’re going, Hilson said, and they’d like to put some kind of impediment to drivers who want to pass on the right when a car in front of them is waiting to turn left.

“We felt that was a particularly unsafe maneuver, because you couldn’t see people in the crosswalk that were crossing that were obscured by the vehicle that you were trying to go around,” he said. 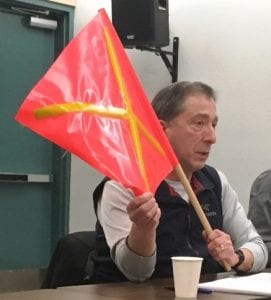 David Epstein with the Alaska Department of Transportation holds up a reflective flag that he says pedestrians could carry when they cross the street. (KRBD photo by Leila Kheiry)

David Epstein is the regional traffic and safety engineer with DOT. He told the group that an immediate, short-term option is to make reflective flags available that pedestrians could carry as they walk across the street. He held one up – bright orange with a yellow X on each side.

It’s pretty inexpensive, he said, and DOT would be willing to let the city install them in the state right-of-way.

Longer-term solutions will take time and money. Epstein said the funding source he has for projects is the highway safety improvement program. That’s federally funded but administered by the state.

“Between 2013 and 2015, there were two serious injury crashes (at Deermount and Stedman),” he said. “When I look at those two, the biggest thing I saw was lack of illumination. So, the commitment I made to city leaders, and I’ll make here to the public, is that I’m going to go back and prepare a nomination for an HSIP project. The centerpiece of that is to improve illumination at that intersection.”

Other improvements, such as flashing speed signs and flashing pedestrian-crossing signs, are items that Epstein said DOT will work on with the city. But, those might have to be funded by the city.

Members of the public provided comments. Terri Robbins asked how residents can help improve the odds that the nomination for funding is approved. Epstein suggested contacting state representatives, but said the project will compete with others statewide.

“They’re based on data and I try to provide as best nomination as I can so it’s got a chance at getting funded,” he said. “I’ve had pretty good luck.”

Katherine Tatsuda asked what the timeline was for that funding process. Epstein responded that nominations are submitted in July of each year. If not approved this year, it could be submitted again.

If it is approved this fall, then 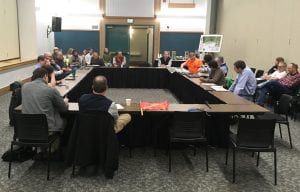 A group including officials from the City of Ketchikan and Alaska Department of Transportation, and members of the public met Wednesday to talk about crosswalk safety in Ketchikan. (KRBD photo by Leila Kheiry)

“Best case, probably a little optimistic: Advertise next summer, construction maybe starting late next year and into ’19,” he said.

Epstein said the city probably could accomplish improvements faster. He also noted that a first step toward changing the speed limit on Stedman near Deermount is a resolution from the Ketchikan City Council.

Tatsuda said she and others have combined forces to start a public awareness campaign, in hopes of spreading a safety message through local media, including radio announcements.

“And we talked about putting some videos out, so that we can get stuff on the internet,” she said. “Just to have people thinking about it. (We’re) hoping to get into the schools and talk to the kids and doing all sorts of things.”

Most people who attended the meeting advocated for the flashing pedestrian-crossing signs. Chris Comstock said those flashing signs aren’t just for the drivers. He said they help pedestrians’ attitudes toward safety, too, because so many walkers in Ketchikan don’t even pause before crossing a street.

“The idea of having to stop to push a button to turn on a beacon, is more than just the visibility for the vehicle. It’s for the mindset of the individual that’s crossing,” he said. “Because of that, that’s an immediate fix that I see that changes the pathway in our brain that tells us we have to do something before we cross the street.”

Distracted driving also was discussed. Ken Arriola said he sees too many people texting while driving.

“We see people on their phone with one hand on the steering wheel, and their device in the other hand,” he said. “And you think, ‘My gosh! They’re either awfully skilled that they haven’t had an accident, or just completely lucky.’”